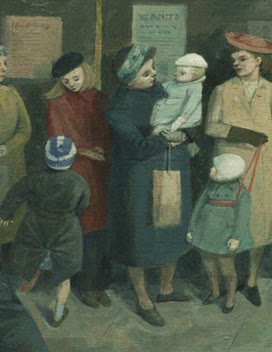 Detail from The Queue at the Fish Shop 1942-45 Imperial War Museum, London.


There's a certain touching poignancy about this detail in one of the greatest of Evelyn's war paintings. She started painting The Queue at the Fish Shop in February 1942, almost immediately on her engagement to Roger Folley, then a Pilot Officer in the Royal Air Force. The Queue at the Fish Shop wasn't a commission from the War Artists' Advisory Committee, nor did it illustrate those women's official activities that Evelyn was supposed to record; it was something Evelyn dreamed up for herself, as much an engagement gift to Roger Folley as anything. All the same it was accepted with open arms on completion three years later, and quickly became one of the abiding images of wartime Britain.

The children in the detail are so spaced in age that theoretically they could be siblings. In the complete painting they're arranged between the RAF officer (actually Roger Folley) and the woman looking out at us from the foreground (actually Evelyn), and I wouldn't be the first to wonder if these children weren't some kind of wish-fulfilment, some projection of the family Evelyn and Roger would like to have. Evelyn and Roger would hardly have been an exception among engaged couples if they hadn't talked excitedly about the children they were going to have.

But this is unknown and unknowable territory. In fact Evelyn discovered subsequently that she couldn't have children, perhaps as a result of the miscarriage she'd had five years earlier, at the end of her relationship with Charles Mahoney. So Evelyn's children remain those she drew and painted, something she did throughout her career. Indeed, images of children could be said to be the start of her career, because on leaving Rochester Grammar School for Girls in 1925 she set herself eagerly at once to earn her living as an artist; her enthusiasm eclipsed - for the moment - any idea of art college.

Small amounts, maybe enough to earn her keep at The Cedars, came her way through writing and illustrating children's stories, among them a collection published by Dean & Son with titles like 'At the Beach' and 'Washing Day'.

Starting with an undated sheet of sketches, here is a small gallery of the meticulously drawn and sometimes coloured images Evelyn lavished on her immediate post-school work. Very few have titles. 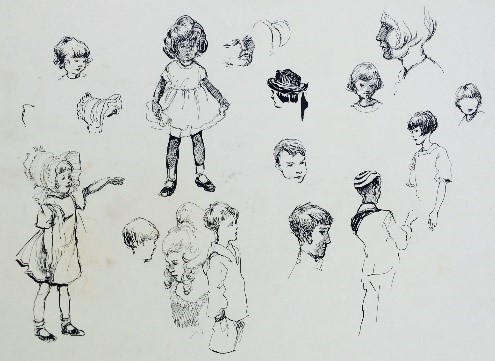 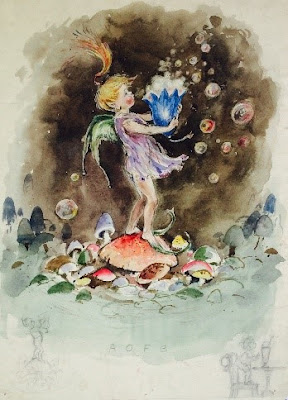 (Note that somehow, surely with no connection to the main subject, in the lower left-hand corner a child standing on a chair the better to attack a knickerbocker glory has crept into this image.) 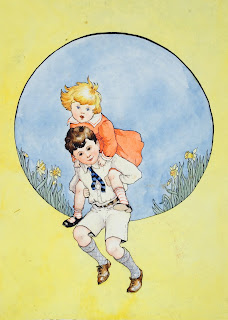 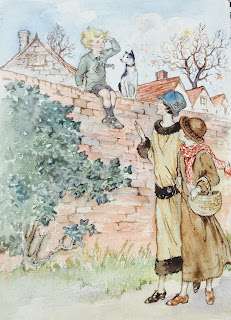 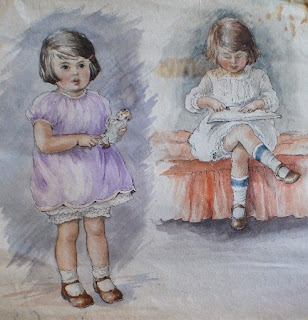 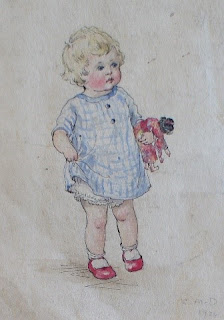 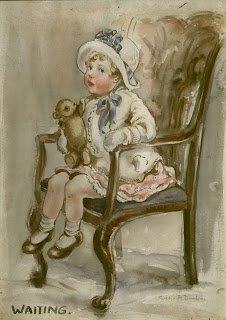 Evelyn's post-school Goldilocks phase, winsome children maybe owing something to Mabel Lucie Atwell had a limited lifetime. By the end of the 1920s she had moved on to a more developed style, involving older children, although still without titles: 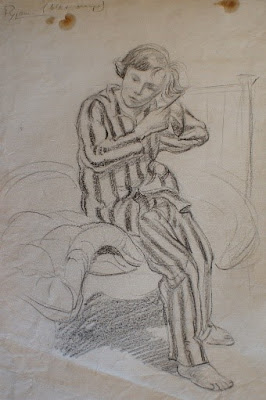 Evelyn's children-based artwork for her sisters' The Children's Shop in Rochester High Street needs a post to itself. By the time she was supplying shop-window work for them in the late 1930s she had evolved a very much more robust and less sentimental style when drawing children. Here are a couple of examples:

'Children Dancing': Pen and ink drawing, unconnected with anything in the text, of a letter to Charles Mahoney of March 10th, 1936. Original in Tate Archive ©Estate of Evelyn Dunbar. 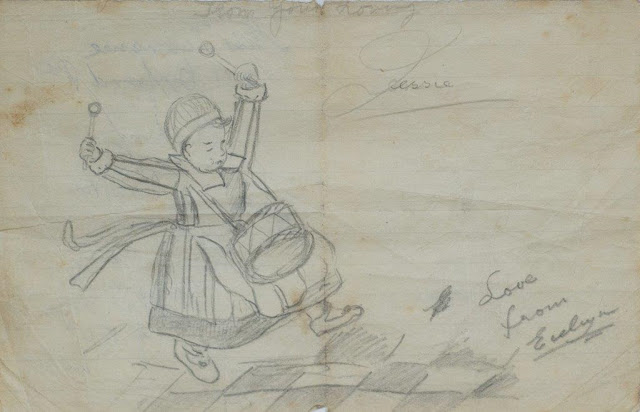 
Finally, from Evelyn's joyous maturity, and at a vast remove from Mabel Lucie Attwell: 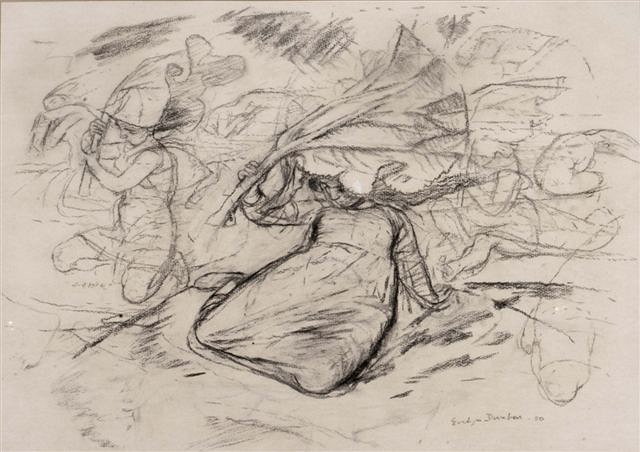 EVELYN DUNBAR : A LIFE IN PAINTING by Christopher Campbell-Howes
is available to order online from
http://www.casematepublishing.co.uk/index.php/evelyn-dunbar-10523.html
448 pages, 300 illustrations. £25
Posted by Christopher at 17:29:00