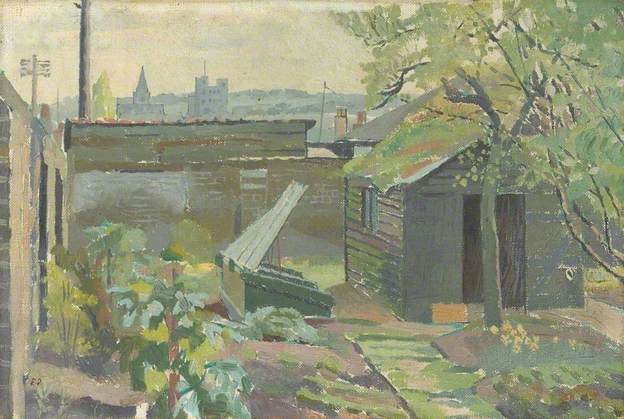 Rochester from Strood is (ostensibly) the view looking south-east from Strood, the Kentish town in which Evelyn and her family lived from 1924-1945, towards Rochester, the nearby city identified by its castle and cathedral, both dating from the Norman Conquest. The river Medway, here hidden by the lie of the the land and intervening buildings, flows between the two towns. As almost always in Evelyn's landscapes, the real picture is about something else, something deeper and more significant. But what?

On a dull spring day in 2013 my wife and I spent a whole morning wandering about upper Strood trying to find the exact elevation, and more or less the same distance, from which Evelyn looked across the Medway valley towards Rochester and its castle and cathedral on the other side, a little over a mile, or two kilometres away. We knew her exact viewpoint, of course: she'd set up her easel near the foot of The Cedars garden, down by the shed, but that wasn't much help because after 75 years the locality has changed. What was once The Cedars garden and an important source of Evelyn's inspiration is no longer there: where once it flourished there's now a cramped housing estate. The best we could do was this: 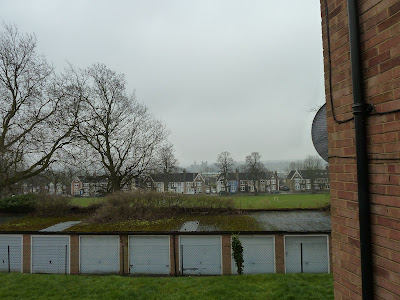 - and if you look very carefully you can just see Rochester Castle and Cathedral in the centre of the photo, minuscule silhouettes against the grey February horizon. They're tiny, even though the photo was taken from almost exactly the same elevation and distance as Evelyn's view. Why has she made these ancient buildings so much bigger in her painting?

It's likely that a little earlier, a few weeks, maybe, but in the same spring as Rochester from Strood, Evelyn painted something similar: 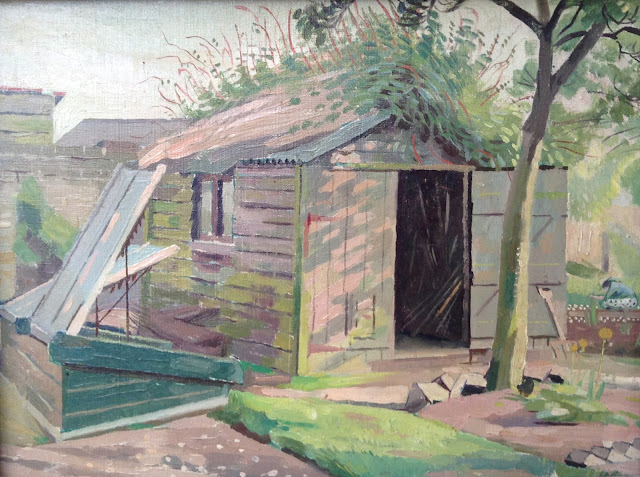 
I had no idea of the existence of this painting until 2014, when, on hearing that I was writing Evelyn's biography, someone with a family interest in her work sent me this photo of 'The Shed'. Enormously grateful and thrilled as always to see something new of Evelyn's, I found the connection with Rochester from Strood and its evolution immediately and excitingly apparent. (The appearance of Florence Dunbar, Evelyn's mother, in typical garden pose on the extreme right was an unexpected bonus.) I think that in the process of painting this it occurred to Evelyn that she could paint it more or less all over again and give her image a much deeper meaning.

Back to Rochester from Strood. This is the far end of The Cedars garden, the garden service area. Evelyn had a strong affection and feeling for garden sheds, toolsheds and potting sheds with their 'rich and heady' - her own expression - scents of earth, tar, compost, twine and sacking, strings of onions, wintering corms and tubers and bunches of dried herbs. If the Covenant (the contract between the Creator and Mankind) was at the cheerful heart of her beliefs, the garden shed represented a horticultural holy of holies, a literally down-to-earth temple consecrated to the day-to-day husbandry needed to keep mankind's side of the bargain.

It's a warmish day in February or March. The shed door is open, what looks like a plum tree is in leaf, and a few yellow crocuses are flowering at its foot. The cold frame has been opened to bring on seedlings in direct early spring sunshine. The last courses of the south-facing wall shelter a few over-wintered artichokes. In the distance, relegated to the background but clearly exaggerated, are Rochester Castle and Cathedral. Rochester Castle is a ruined witness to past ages of strife and disharmony, while the nearby Cathedral stands as a monument to values that Evelyn only perceived as marginally touching the daily life and interaction of her friends and family and the world in general.

As temples go, the garden shed is more significant, standing for something at once mundane and spiritual, where its relevance lies in its in its humility and its re-definition of notions of worship. Can we exclude the possibility of a typical Dunbar subversion here?