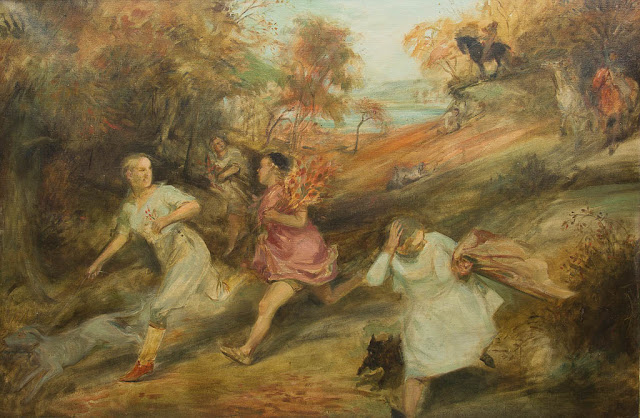 No amount of staring at it throws much light on 'Hunters and Hunted', an extraordinary and uncharacteristic extravaganza from 1929/32. I've no idea what's happening. None of the figures resembles anyone known to be prominent in Evelyn's life at the time. The somewhat bizarre dress, including a very fine pair of boots worn by the left-hand figure, may suggest certain Bohemian leanings in her fellow Royal College of Art students. (Evelyn began her RCA course in 1929.) As there is no signature her authorship might be questioned, were it not for an impeccable family provenance, for 'Dunbar RCA' scrawled on the back of the canvas and for a barely-visible outline sketch, discovered in 2013, on the verso of some caricatures of Royal College of Art staff. 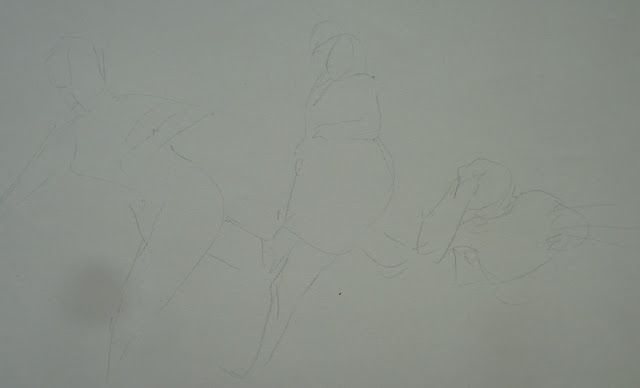 Sketch for 'Hunters and Hunted' Pencil 1929-32. Photograph (v. poor, many apologies) by the author. Private collection.

The dogs, too, proclaim their milieu: Paul, a sort of terrier the Dunbars acquired in 1928, in the centre foreground and Felbridge, the lurcher who must have been very ancient when this was painted, if indeed Evelyn isn't making a posthumous tribute. Felbridge is barking at a horseman standing on a low promontory: beneath the overhang a fifth girl is trying to escape notice. The landscape is slightly reminiscent of the country round Tunbridge Wells, but recognising this does nothing to solve the mystery: who are these young women, why are they trying to escape from the horsemen, what are they trying to make off with? Flowers, sprays of autumn leaves, a sack? There must be more to it, surely...

If nothing else 'Hunters and Hunted' shows Evelyn extending her scope, at whose behest is anyone's guess. This is the first narrative work from Evelyn's hand, or, if the reference was known, it might be classed as the first of her many allegories.

EVELYN DUNBAR : A LIFE IN PAINTING by Christopher Campbell-Howes
is available to order online from
http://www.casematepublishing.co.uk/index.php/evelyn-dunbar-10523.html
448 pages, 300 illustrations. £25
Posted by Christopher at 14:17:00