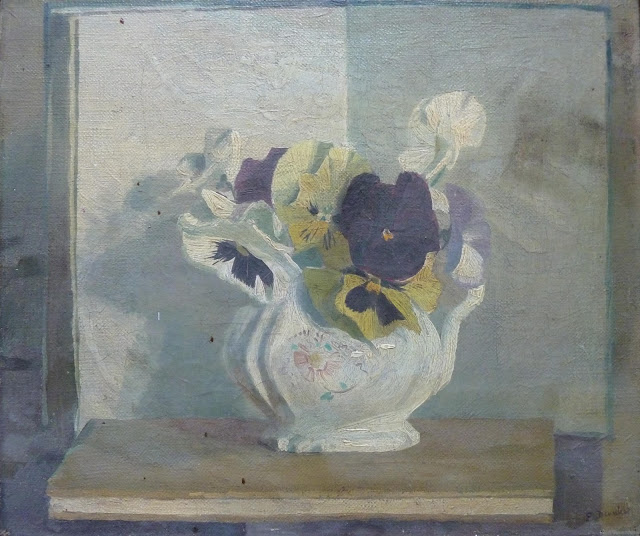 
Still-life was never really Evelyn's genre. To my knowledge there are only six in her entire canon, and I've reproduced them all here. The genre didn't appeal to her because for Evelyn life was never still, never unproductive: life had to move, to seethe, to regenerate, to be vital and compelling. In almost the totality of her work people are present, people moving, working, playing, fulfilling her calling to express creation, and mankind's relationship with it, in all its energy and power, actual and spiritual.

What Evelyn did produce in this form owes almost everything to her mother Florence, a doughty and indefatigable painter of still-lifes, almost always floral. Pansies and Violas, above, can perhaps be taken as Evelyn's tribute to her mother, who died in 1944. It's the first of Evelyn's post-war paintings, and the first to come from Vyners, the cottage in Long Compton, Warwickshire, where she and her husband Roger Folley set up their first married home. It's as though, having put her war painting behind her, the first item on her to-paint list was an in memoriam to the mother to whom she owed so much. I don't think she painted another still-life thereafter, unless the undated 'Bramley Apples in a Colander' is an exception. 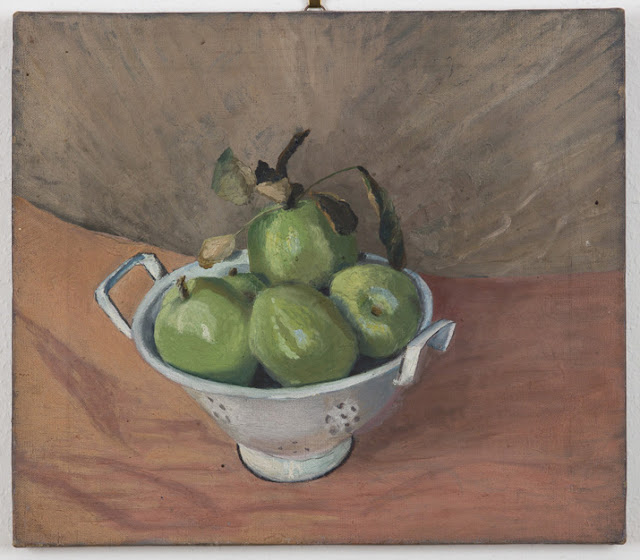 I suggest - although I'm not convinced that it matters very much - that 'Bramley Apples in a Colander' may come later in Evelyn's career for no better reason that in the period 1938-47 apples appear quite often as a sub-theme in her work. They even stray into her war painting: A 1944 Pastoral: Land Girls Pruning at East Malling is all about apples, and a Bramley, similar in tone and texture, appears in a bowl of apples at the top of the painting. (It has to be said, however, that Bramleys, which used to be the preferred English cooking apple before being supplanted by European varieties, were very common indeed.)


It's likely that a study of a cineraria in a pot comes from Evelyn's late teenage years, when she shared a tower studio with Florence at The Cedars, the Dunbar family home in Strood, Rochester, Kent. 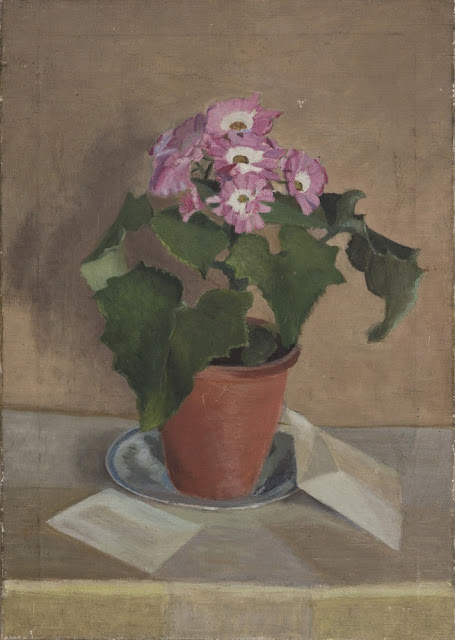 It's difficult to identify this particularly with Evelyn, or to distinguish it from Florence's work, other than by an un-Florentine sense of depth, some deft handling of shadow and by the inclusion of something extraneous, in this case a letter and envelope. However, the family provenance is immaculate, so no one needs doubt Evelyn's authorship.

The most surprising, indeed enigmatic, of Evelyn's still-lifes is perhaps the earliest. She's trying her hand at impasto, and certainly the roses below have a tactile quality, almost 3D feeling to them: 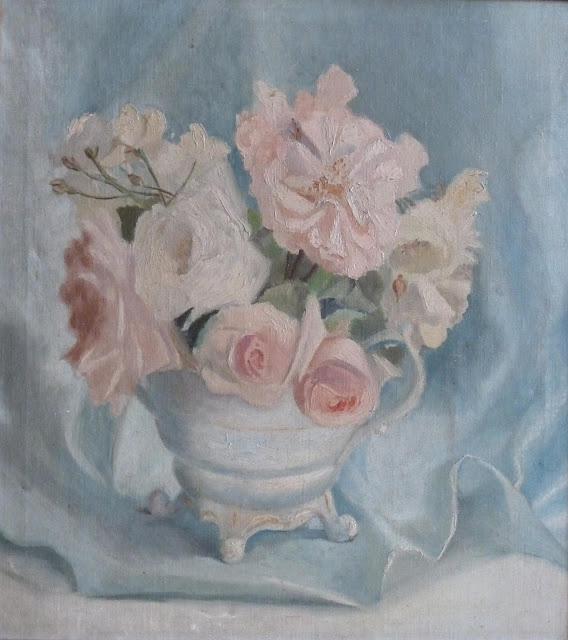 14! But there's just a little uneasy niggle: most floribunda roses flower in late spring and summer, so that if Evelyn is painting from the life and not from a copy, these roses must have been painted in the spring or summer of 1920, when she was 13; her 14th birthday wouldn't have fallen until December 18th, 1920. The inscription suggests that it may have been entered for an exhibition, perhaps one organised by the Rochester and West Kent Art Society, of which Florence was a member. Whether or not the inscription is strictly accurate, Floribunda Roses is an extraordinarily assured and competent piece of work and, like Cineraria with Letter above, maybe a rite of passage. 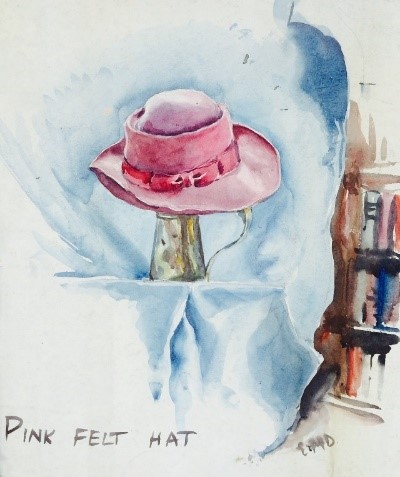 
Pink Felt Hat was discovered among Evelyn's residual studio, one of the hundreds of artworks rediscovered in a Kentish oast house in 2013, having lain undisturbed since a few months after her death in 1960. I'm not aware of any context for it, nor whose hat it was to be immortalised like this, nor what fancy took Evelyn to stand it on top of a brass jug and back it with a bed-sheet. But I'm glad she did. 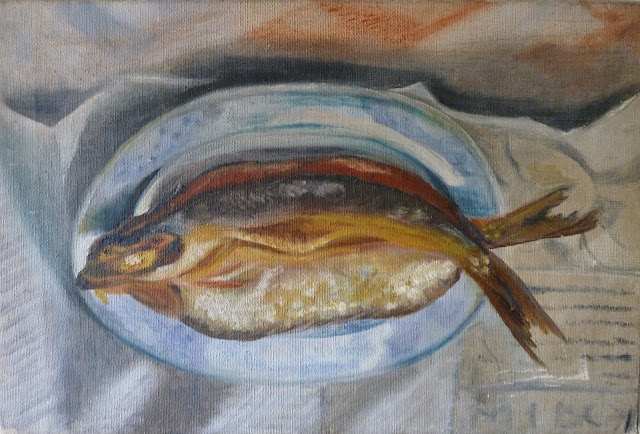 Nothing to say, except maybe to wish the viewer bon appetit. If you like kippers, that is.

EVELYN DUNBAR : A LIFE IN PAINTING by Christopher Campbell-Howes
is available to order online from
http://www.casematepublishing.co.uk/index.php/evelyn-dunbar-10523.html
448 pages, 300 illustrations. £25
Posted by Christopher at 10:01:00