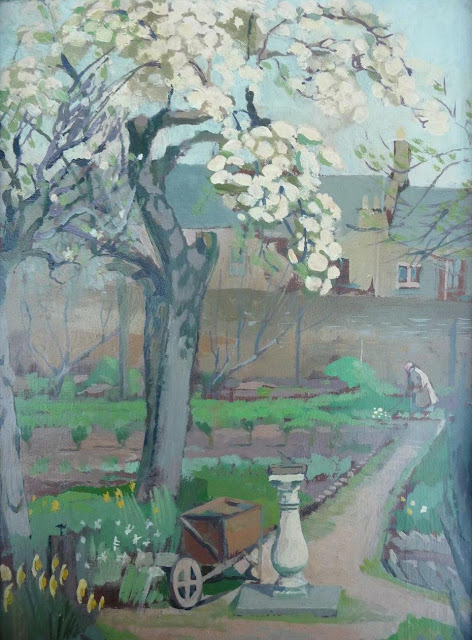 
I've sandwiched the title of this little study between inverted commas because Evelyn never gave it one. It's easily identifiable as the garden at The Cedars, the house in Strood (the trans-Medway suburb of Rochester, Kent) where Evelyn lived, or had her base, from 1924 to 1945, when she finally left to set up her married home in Warwickshire with her ex-RAF officer husband Roger Folley, later to become a major horticultural economist.

Two at least of her minor garden trade-marks, those that appear in her other renderings of The Cedars garden, are present: the background brick wall and the diagonally-laid brick edges to the paths. A human figure clinches its topographical authenticity: this is none other than Florence Dunbar, Evelyn's mother, an indefatigably green-fingered gardener, from whom Evelyn learned not only much of her gardening lore but, more significantly, to view the garden as a metaphor for mankind's interaction with nature. 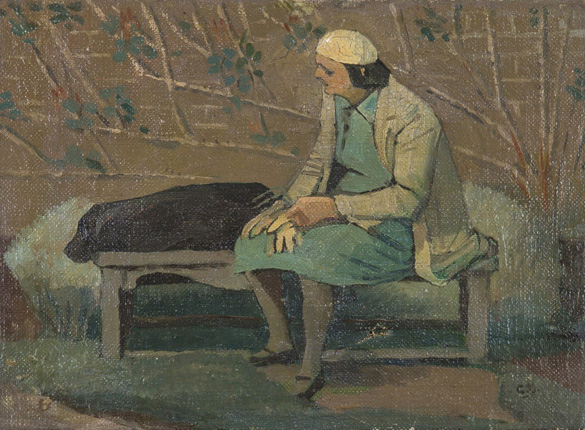 Back to the apple blossom. For all the wild exuberance of the blossom it's a rather sad picture. It comes from what Evelyn called her crisis years, 1938-40. Her relationship with the artist Charles Mahoney, her former Royal College of Art tutor, came to a disastrous end in late 1937. Several, perhaps most, of her paintings from this period are heavily autobiographical. Here, in The Cedars garden, mainspring of her inspiration, it may be spring, but several of the apple tree branches are dead. An old wheelbarrow frame carries a portable incinerator, make of it what we will. Most significant, and duly placed in the foreground, is the sundial. Time is passing: she has lost the man she wanted to marry, she has lost many of the art-world contacts in his circle, her career is at a standstill. The Rochester art gallery she founded in early 1939 attracted no sales at all and had to close a month or two later, perhaps - I have no proof - at exactly the time Apple Blossom at The Cedars was painted. For a full year from the spring of 1939 until April 1940, when she was gazetted as an official war artist, Evelyn virtually stopped painting. Instead she found herself obliged to work behind the counter in her sisters' haberdashery shop in Rochester High Street.