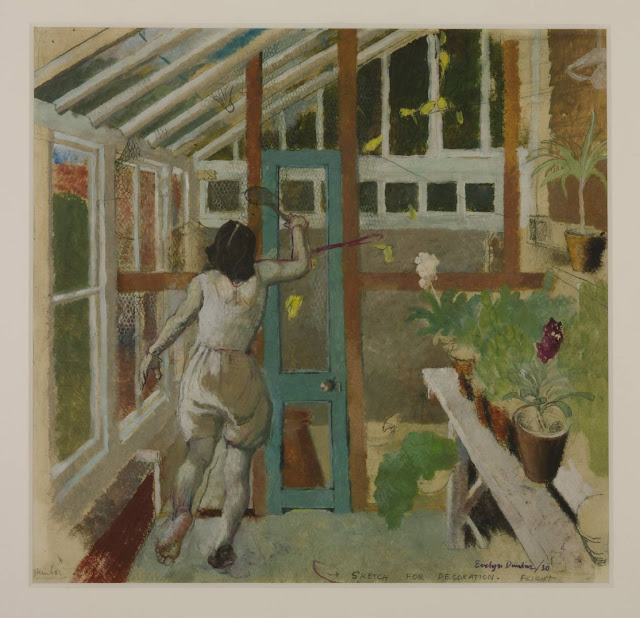 The scene is the conservatory at The Cedars, the Dunbar family house in Rochester, Kent. Someone, probably Evelyn's father William, has partitioned off the far end with chicken-wire to make a birdcage. In the late 1920s and early 1930s the Dunbars kept canaries (a rough count shows about eight). One of them appears, although only just, in Girl and a Birdcage, the subject of the next post.

The chicken-wire has been stretched tightly enough to allow a badminton shuttlecock to bounce back, and in the absence of a partner the white-clad Jessie, Evelyn's sister, has found this exercise a substitute for a real knock-up, although surely an unrewarding one. The barefoot Jessie is wearing a white top tucked into the rather unflattering shorts of the period. She may be barefoot accidentally, because to her right there is the rough outline of a pump or slipper. She also appears to be wearing light gloves, or just possibly bracelets. Evelyn is uncertain about the line of the racquet, as there are three possible positions sketched in. The shuttlecock is very lightly sketched above Jessie's head. A sturdy bench carries several unidentifiable pot-plants, maybe awaiting, or recovering from, still-life eternalisation at Florence's hand; Florence, Evelyn's mother, specialised in floral still-lifes. A previous outline of Jessie's left leg remains visible.

Perching wires stretch across the cage. The canaries are perching or fluttering about at their own free will, in a liberty only constrained by the cage. One canary, albino or absent-mindedly uncoloured, is sipping from a water-bowl on the floor. In contrast, Jessie for all her appearance of being about to take off into the air is rooted to the ground by gravity, while the flight of the shuttlecock, the other feathered entity in the picture, is governed by human intervention. The geometrical lines of the conservatory beams, the frame of the cage and the line of the bench mark out a rigidity and control in strong contrast with the haphazard freedom of the birds' positioning and the fluidity of Jessie's movement.

The foot of the painting is cluttered with writing. Someone, possibly Evelyn, has written 'Dunbar' in the lower left hand corner. The inscription 'STUDY FOR DECORATION - FLIGHT' is most probably in Evelyn's hand.

There is material here for an entirely conjectural reconstruction. Evelyn, towards the end of her first year at the Royal College of Art, has been required to sketch a design of a certain size, to be included in a decorative frieze entitled 'Flight', to which all students in her group were asked to contribute. At the time, the notion of flight and the development of aircraft were in full and exciting expansion. It can be imagined that Evelyn's tutors were struck by the originality of her design when the sketches were collected in: there was nothing that might ordinarily be expected, no aircraft, no autogyros, no Hindenburg or R101 airships, no Schneider Trophies nor even the popular heroine Amy Johnson, who in May 1930, as the RCA year was approaching its end, became the first woman to fly solo from Britain to Australia. Instead here was a balanced and strongly constructed fantasy with wry domestic glances at the notion of flight. Whichever tutor was responsible for organising and mounting the supposed decorative frieze wrote 'Dunbar' in the bottom left-hand corner to identify it among the other contributions. In due course the 'Flight' frieze was dismantled. Maybe it never got further than a display of sketches. Evelyn wrote on hers 'STUDY FOR DECORATION - FLIGHT' and tucked it away in a portfolio.

Then in 1939, when incidentally Evelyn was at a low ebb, financially, professionally and emotionally, the artist Allan Gwynne-Jones suggested to his fellow trustees at the Tate that the gallery might buy something something of hers. As her first-year RCA tutor in 1929-30 it is possible that Gwynne-Jones remembered Study for Decoration - Flight and asked Evelyn for it, almost ten years later. Prior to its transfer to the Tate, Evelyn was persuaded to sign it, backdating it to the year of its origin. On acquisition the Tate made a tiny change to the title, substituting a colon for Evelyn's dash, something which slightly alters the focus of what was really Evelyn's memo to her tutors, but which is maybe better wrangled over by grammarians.