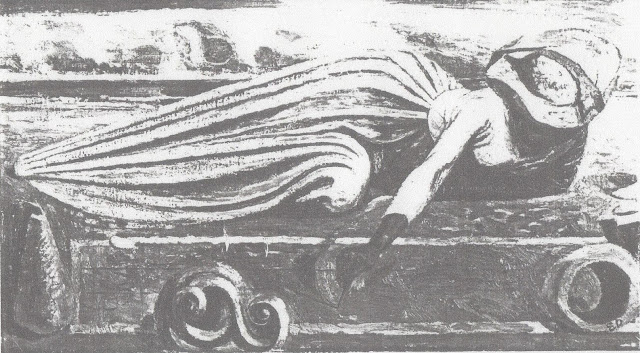 At the end of World War 2 in 1945 Evelyn's appointment as a war artist came to an end. Her mother Florence had died the year before, and The Cedars, the family home in Strood, Rochester, had become too large for the remaining Dunbar siblings, who decided to sell it. Evelyn had married Roger Folley, an RAF Navigator, during the war. Both were anxious to set up a married home. At the suggestion of Roger's sister Joan they bought a cottage next door to her in the Warwickshire village of Long Compton.


In the eighteen months or so that she spent at Long Compton, Evelyn began to re-explore her pre-war delight in allegorical figures and personifications. Mercatora, probably painted in the summer of 1946, was the first of these. Unfortunately it has disappeared from public view. 50 years and more after its completion Roger remembered, maybe rather vaguely, that the origin of this unusual personification of cartography lay in his wartime experiences.

It isn't easy to unscramble fully the symbolic content of this rich counterpoint of curved and straight lines from a monochrome photograph, for which I apologise, but it appears to be the only image in existence of this very remarkable painting. Colour would have played such a vital role in Evelyn's realisation of this fantasy and of our deeper understanding of it.

Mercatora, named after the Flemish map-maker Gerardus Mercator (1512-1594), he of the famous projection, is lying on her side, leaning on her left elbow, with her left knee drawn up. Her face is almost invisible, hidden in the shadow of a bonnet fastened by a ribbon tied under her chin. Her right arm is extended over a long rectangle, and she is marking an outline, a coastline, maybe, with a stylus. The rectangle, of paper or vellum, is liable to roll back on itself, and to prevent this it has been weighted down by an abstract conical form on the left and a cylinder on the right, marked with Evelyn's initials.

Mercatora's problem is how to project the image of the planet Earth, a three-dimensional sphere, on to a two-dimensional rectangle to make a map. The cone and the cylinder represent partial solutions to the problem, which is also symbolised by the scrolls in the left foreground. They are nothing more than a stylisation of an apple being peeled, the idea being that if you peel a more or less spherical apple carefully you can begin to arrange, extremely crudely, the strips of peel into something like a rectangle. This is a practical example sometimes used in schools to illustrate the problem of projection. Perhaps Roger used it to show Evelyn.

(The problem is actually insoluble, other than by the distortion of land masses progressively distant from the Equator, so that Greenland, in reality about the surface area of Algeria, appears larger than the entire continent of Africa. Eurocentric people have been happy to accept Mercator's compromise map of the world, and probably will for ever.)

Other map-makers have attempted projections based on the cone and the cylinder, both alluded to in Mercatora. The principal allusion lies however in Mercatora's magnificent skirt, where lines like meridians of longitude originating from a single point are swirled and regathered.

One or two preliminary sketches for Mercatora survive. They were found in 2013 in Evelyn's residual studio, now known as the Hammer Mill Oast Collection. It seems that Evelyn had some doubts about Mercatora's posture and position before finally deciding to show her lying on the ground: 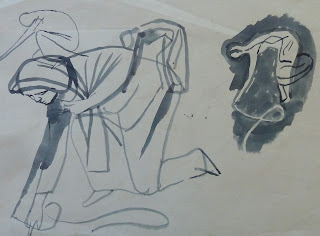 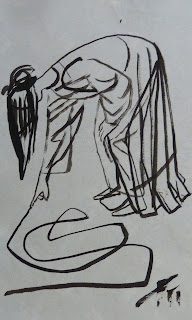 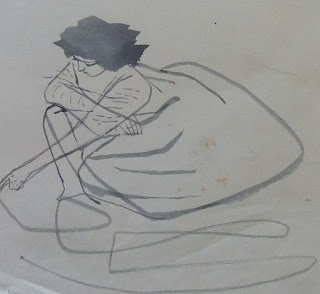 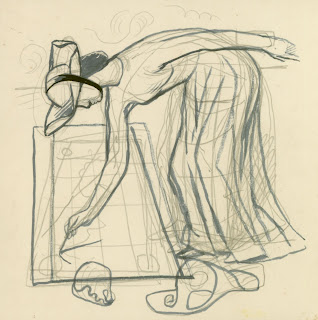 Mercatora was exhibited at the Ruskin, Oxford, in November 1950, where it sold for 25 guineas (about £750 at 2018 values). It was probably sold to someone fairly local, because it next appeared at Evelyn's only solo exhibition, held at Wye College, Kent, in December 1953, so it might be assumed that she was able to 'borrow' it back. Since then nothing has been heard of it. I don't suppose anyone reading this has ever come across it?