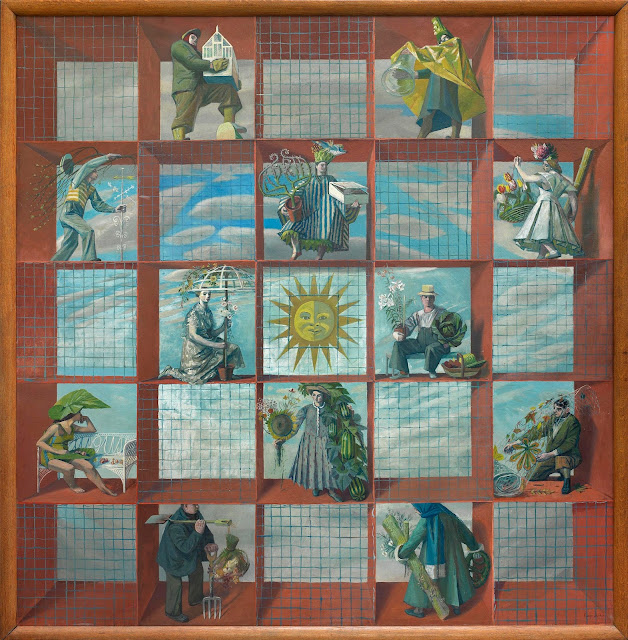 Evelyn's final exposition of the month-designs she had originally made for the Country Life 1938 Gardener's Diary was in An English Calendar, the largest canvas she had attempted to date. A few of the months are old friends. April - subject of the previous post - is almost unchanged. February, however, has lost her complicit furtiveness, and not to her advantage, while August has lost her previous deeply personal autobiographical elements, the symbols of her desire and its fulfilment have been confiscated and she has become merely a pretty woman sitting on a garden bench and - these things are always important in Evelyn's work - looking into the ensemble of the composition rather than outside the frame. She and February have sacrificed their individuality for the sake of overall design and, I think, to suit Evelyn's overall purpose.

Similarly with some of her other Gardener's Diary precursors. Evelyn originally conceived of July like this: 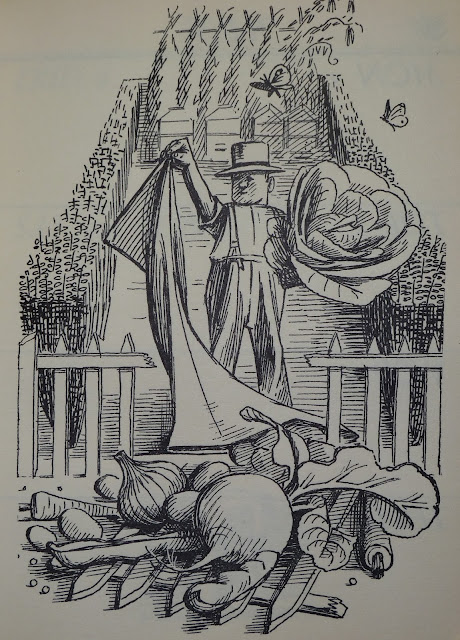 
This chap is a wonderful July, a hands-down winner in comparison with the unexceptional village-vegetable-show figure in An English Calendar. He has harvested an enormous crop of vegetables, so impressive an abundance that the outsize sack - it is almost a tarpaulin, not to speak of a conjuror's cloth - is not big enough to take them all, so that he has to hold under his arm the giant cabbage he has grown. So great is the tumbling profusion of these vegetables that their weight has smashed the fence. I can imagine Evelyn hugging herself with delight at the sudden appearance of this notion at the end of her pencil, this image of Nature's outrageous generosity endorsed as something quite normal by the deadpan and incurious expression on the gardener's face. 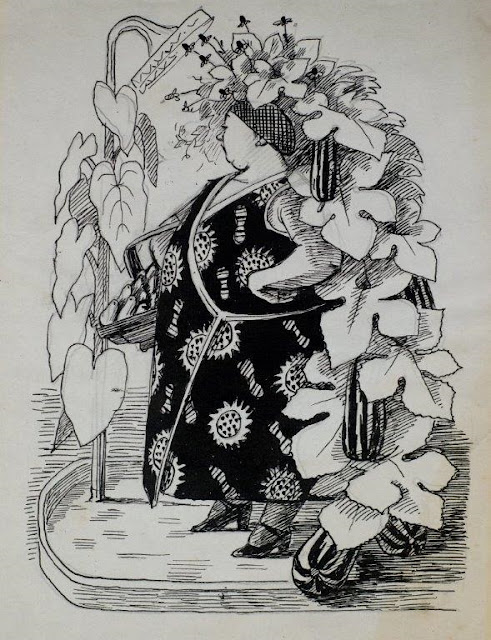 ...and while Evelyn has preserved the vegetable marrows in both versions there's no doubt in my mind as to which Mrs September, this one or the more insipid version in An English Calendar, has the greater individuality and the stronger identification with the abundance of produce at what is traditionally Harvest Festival time in the United Kingdom.

An English Calendar was exhibited at Wildenstein's Gallery, London, in 1938. It attracted favourable press notices, with the exception the Left Review of May 1938, in which a critic calling himself 'Toros' wrote:

Evelyn Dunbar showed invention and fancy - rare qualities in these times. But her outlook is thoroughly petit-bourgeois. There is a small-town or suburban atmosphere about it - a contented preoccupation with the little details of life among cabbages and marrows. A larger horizon and subject-matter are required to give a real chance to her very considerable powers as a designer.


'Toros' was in fact Percy Horton, a tutor at the Royal College of Art and later Master of the Ruskin School in Oxford. Evelyn worked on his staff from c.1948 until her death in 1960; they had always been good friends. There's an irony here: I wonder if Horton would have levelled the same petit-bourgeois criticism if Evelyn had not substituted the very strong images originally designed for Gardener's Diary for the much paler and more anodyne figures that ended up in An English Calendar?

The reason for the weakening of the individual figures in An English Calendar by comparison with those in Gardener's Diary is obscure, but may have something to do with the picture not really being about the months at all, but about the natural annual cycle of birth, growth, harvest, death, resurrection and mankind's relationship with creation. This takes us to the heart of Evelyn's work. Personality, or the marked individuality of the month-personification, doesn't really come into this thesis; it's the activity that counts, rather than the personage associated with it. Central to this is the sun, duly occupying the central square, and we may notice that the chicken wire enclosing the empty boxes has been cut away to reveal the sun more obviously. And the humble idea of chicken wire leads to something else: the surround, the boxes, are not merely a design feature, nor a convenient framework. The framework is like a huge wooden garden planter, stood on its side. What we are seeing is the earth in all its abundance, and mankind's duty to look after this gift, symbolically reduced to the dimensions of the garden.

An English Calendar never sold, and in 1957 Evelyn donated it to Wye College, where her husband Roger Folley lectured in horticultural economics. For years it hung in Withersdane Hall, the administrative centre of the college, giving rise to false rumours that it was a mural. When Wye College closed down, it was recovered by the parent body, Imperial College, in whose possession it still is.

EVELYN DUNBAR : A LIFE IN PAINTING by Christopher Campbell-Howes
is now available to order online from
http://www.casematepublishing.co.uk/index.php/evelyn-dunbar-10523.html
448 pages, 300 illustrations. £30 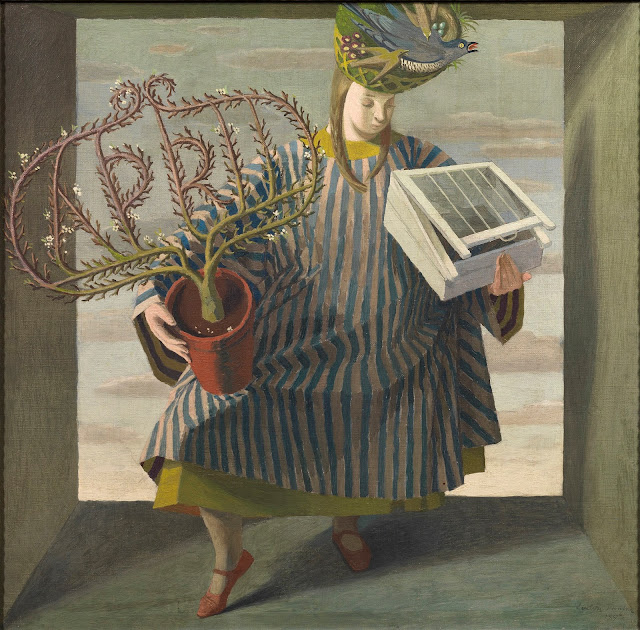 April is the third and last realisation in oils of the original pen-and-ink month-personification drawings Evelyn had made for the Country Life 1938 Gardener's Diary. 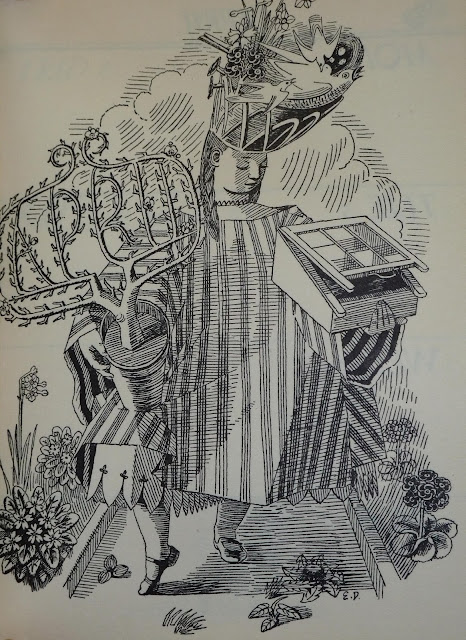 
Here is April, backed by a shower-cloud, advancing down the garden path gingerly, balancing simultaneously a heavy pot-grown apple tree, an empty cold frame and the most fantastic hat in all Evelyn's work. The branches of the apple tree have been espaliered to form the word April: leaves are sprouting and the first blossoms have broken out here and there. Whatever the cold frame once contained has now gone. As for her hat, there is a standard selection of spring flowers, but the most intriguing feature is a bird's nest with two small birds that the later oil version suggests might be greenfinches vainly trying to see off a cuckoo about to lay her egg in their nest. It may be too much to link this symbol of unexpected and unwelcome new life - unexpected and unwelcome at least to the greenfinches - with April apparently wearing a maternity dress, in the context of the months elapsed since August, subject of the previous post. Evelyn's husband Roger Folley once suggested to me that there was an allusion here to T.S.Eliot, without being more specific. Knowing Evelyn's love of allusion, I suspect - if Roger's suggestion is viable - that Evelyn may have had the famous first lines of Eliot's The Waste Land in mind: 'April is the cruellest month, […] mixing Memory and desire […]'

The oil version of April has several slight differences in design from the drawing: the garden path has gone, along with the spring flowers; the famous hat is even more fantastical, giving an extra prominence to the cuckoo in the nest. April is framed inside a box opening on to a sky much less promising of rain than in the drawing. The box, also a feature of Joseph's Dream, may have an unwitting importance: it implies a psychological need for security and protection, something that Evelyn was certainly short of in the immediate post-Mahoney period. 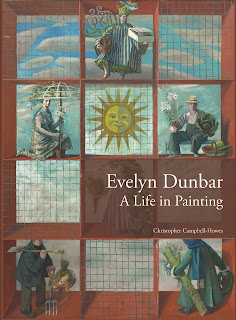 EVELYN DUNBAR : A LIFE IN PAINTING by Christopher Campbell-Howes
is available to order online from
http://www.casematepublishing.co.uk/index.php/evelyn-dunbar-10523.html
448 pages
301 illustrations
£30 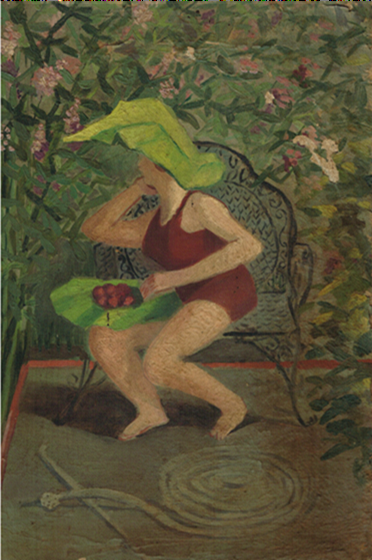 
August is the second of the three oil versions of month-personifications which Evelyn had earlier produced in pen-and-ink form for her Country Life 1938 Gardener's Diary. (The first was February, subject of the previous post; the third was April, which will appear in the next post.)

There's some autobiographical background to this rather heavy and overblown image, one of the very few in Evelyn's work in which the subject is facing out of the frame, as though she was looking for something or someone that has gone, for something beyond the immediacy of the lush headiness of her surroundings.

Four years earlier, in the early summer of 1933 as she was about to leave the Royal College of Art and begin her career, Evelyn started an affair with one of her tutors, the artist - and particularly muralist - Charles Mahoney, who was some three years her senior. Although both Evelyn and Mahoney worked together by day on the Brockley Murals furtherance of the relationship was difficult and frustrating. Neither had their own home. Neither lived in circumstances where the bringing in of a young man/lady would be viewed favourably. The problem of spending quality time and intimacy together was solved partially by going to stay with friends, mostly colleagues of Mahoney. Typical of these were the artist Edward Bawden and his wife Charlotte, doyens of the group of artists gathered round the village of Great Bardfield in Essex. Given Evelyn's and Mahoney's love of plants and gardening and their readiness to involve themselves in their friends' gardens, it didn't take long for them to be nicknamed 'Adam and Eve'. Indeed Evelyn sometimes refers to herself as the Biblical Eve in the illustrated letters she frequently sent Mahoney. They never married. Evelyn would have liked to marry him, but Mahoney refused to be pinned down, claiming that marriage and children would jeopardise her career as an artist. While it can hardly be said that she threw herself at him, undoubtedly she gave him plenty of encouragement: here she is in provocative pose, proffering the apple of temptation, in a pictogram signature on a postcard she sent him in 1934. (I think the fruit have to be gourds, making the word 'gourdgeous', i.e. gorgeous.) 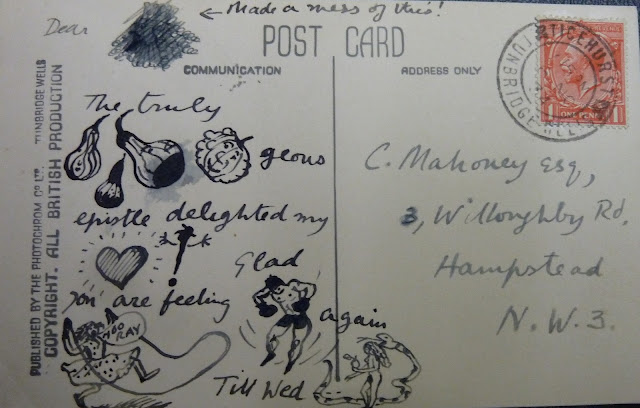 One of her letters from the following summer contains this image of herself as Eve... 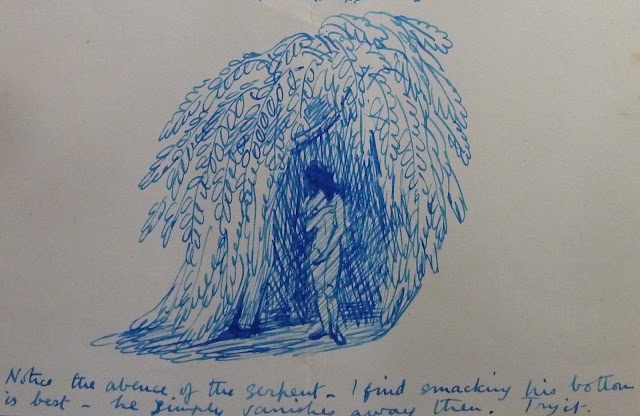 ...and underneath she has written 'Notice the absence of the serpent - I find smacking his bottom is best - he simply vanishes away then. Try it.' What does she mean? Has the Old Adam been importunate? Or the Old Eve, for that matter? Or is this a general exhortation to square up to temptation and send it packing?

And another letter from September 1936 contains a sort of mild period sexting:

(These excerpts have been taken from the extraordinary collection of letters, 1933-39, from Evelyn to Mahoney - no replies survive - which are lodged in the Tate Archive, the gift of Elizabeth Bulkeley, Charles Mahoney's daughter. My photographs: © The Estate of Evelyn Dunbar)

In the summer of 1937 Evelyn was working on her drawings for the Country Life 1938 Gardener's Diary and finalising the text and drawings for Gardeners' Choice, the book she and Mahoney produced jointly, which appeared in the late autumn. In the final stages they worked together: Mahoney had found, or Evelyn had found for him, temporary lodgings in Rochester, a 20-minute walk from The Cedars, the Dunbars' house across the Medway in Strood. The relationship had been coming apart for over a year. Maybe this was Evelyn's last despairing attempt to save it. It failed. By early September Mahoney had disappeared, retreating to the outer edges of Evelyn's life.

In the context of the Eve/Evelyn sketches, it's interesting to compare the oil version of August above with the earlier pen-and-ink version below, which appeared in the Country Life 1938 Gardener's Diary. For one thing it's striking, and typical of Evelyn's spirited imagination, that the serpent has turned into a garden hose. I leave readers, who may wish to move on quickly having registered the inference of the pump, to draw their own compare-and-contrast conclusions. In fact between completion of the drawing below and the oil version, Evelyn miscarried. 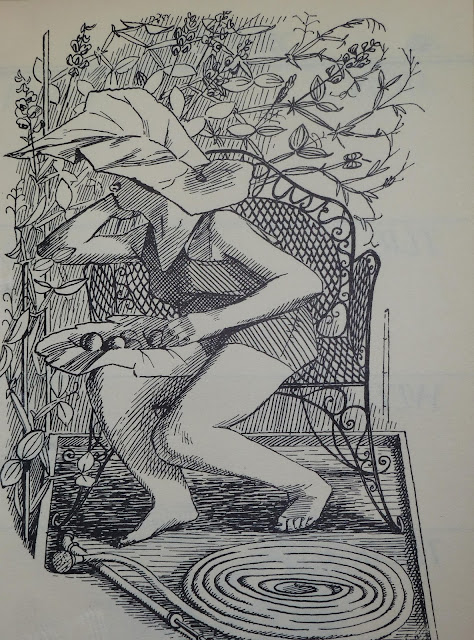 EVELYN DUNBAR : A LIFE IN PAINTING by Christopher Campbell-Howes
is now available to order online from
http://www.casematepublishing.co.uk/index.php/evelyn-dunbar-10523.html
448 pages, 300 illustrations. £25
Posted by Christopher at 13:42:00 No comments: