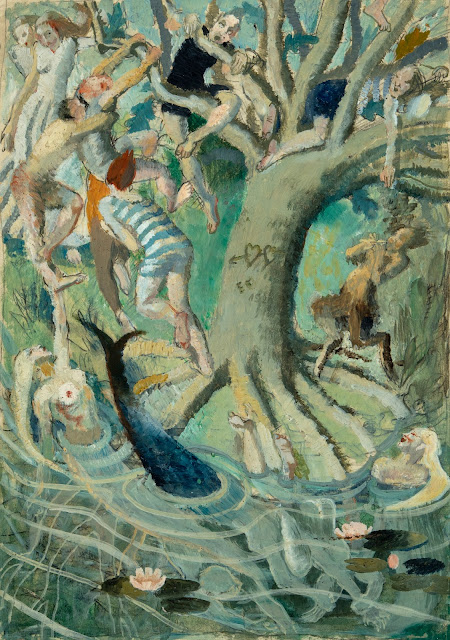 Further discoveries of Evelyn's work in 2021 include Water-nymphomania (my title, in the absence of anything better), a piece unlike anything else in Evelyn's entire canon. No obvious documentation or circumstances survive, although a handful of sketches and other material which Evelyn kept together in a small portfolio until the end of her life may have some bearing on it. We'll look at these in a moment. As to what's going on in this orgiastic phantasmagoria, and what inspired it, various avenues are open to exploration.

Central to Evelyn's fantasy is the tree, with two hearts transpierced by an arrow, the initials E and ? and the date, 1928. On the right, isolated to give him a stronger presence, the god Pan plays the double flute, the aulos, an instrument sometimes associated with orgy in Greek legend. Apart from Pan, there are some 10 human figures in the picture, two water-nymphs, one with a fish tail (perhaps a Rusalka of eastern European legend), and one single foot in the top right-hand corner, sometimes Evelyn's preferred position for a sardonic comment, wry observation or even a joke. Of the identifiable figures, four appear to be male, five female and one, with brown tights and an orange top, is half-hidden and might be either. One of the females is mostly underwater, clinging to one of the water-nymphs, who has just dived in. The water is flowered with waterlilies, a symbol of purity. Four of the women have been injured and are bleeding from the mouth, temple or breast. In general the mostly unprepossessing male figures appear to be trying to escape up the tree. One is being prevented from escape by a water-nymph clinging to his ankle.

In the summer of 1928 Evelyn, then 21, spent some time in Germany, having travelled there via Holland. She designed - and initialled in a later style - a little map of the Dutch section of the journey: 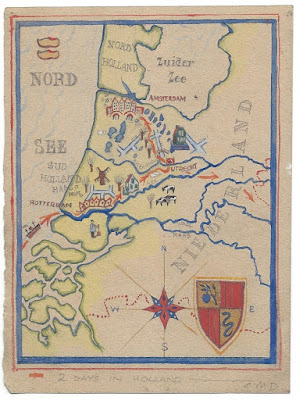 Crossing the North Sea, probably from Tilbury, she landed in Rotterdam, and went on from there to Utrecht and thence to Amsterdam. The map is entitled '2 days in Holland' so presumably she spent a night somewhere, perhaps Amsterdam, before retracing her steps to Utrecht and moving inland into the heart of Germany, as it was in 1928, if the direction of the last right-hand arrow is anything to go by. Perhaps accidentally, she has given Nederland, the Dutch name for Holland, its German spelling, Niederland. The map has some striking features: a facility with lettering, perhaps a result of some weeks of studying calligraphy at Chelsea College of Art a year or so earlier; and - most extraordinary - a heraldic shield notable for what appears to be, if it isn't an apple, an olive branch with an olive and, in the diagonally opposite quarter, a serpent. What is Eve-Evelyn trying to say?

Where was she going? There may be a clue in some rudimentary landscape sketches: 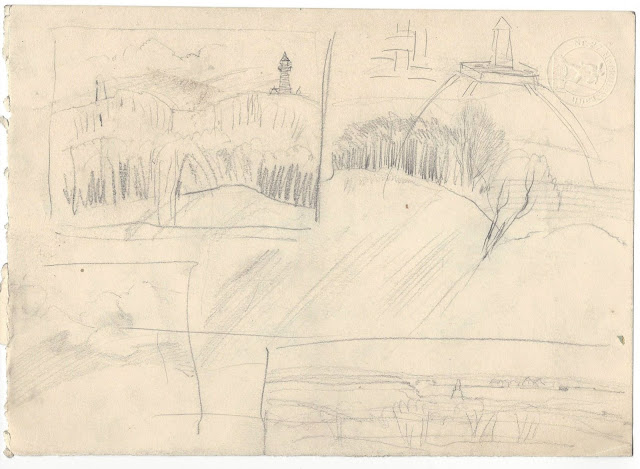 This is a page torn from a cartridge paper sketch book, with an embossed stamp in the top right-hand corner reading 'Nr 27 Herkulesrauh', indicating a high quality German cartridge paper. The lower left-hand sketch appears to be of clouds, not very helpful in situating Evelyn's German destination; the lower-right hand features a distant tower in rolling countryside, too vague to be specific; the upper right-hand sketch is of a man-made hillock, surely, with a plain tower on the top; while the upper left-hand drawing, which includes a tower in some detail, seemed to promise more than the other three.

And so it turned out. I put the sketches round German friends and others with German contacts, with the reminder that Germany in 1928, as in the sketches, might not be the same as Germany in 2021: forests might have grown, or might have vanished; towers might have fallen or have been destroyed; later building might have intervened between subject and sketcher. Mostly blanks were drawn, until someone on Twitter (to whom many thanks if you read this!) identified the top right-hand tower as the Kaiser Wilhelmdenkmal in Kyffhäuser, a monument - one of many such towers, all different, spread over Germany - commemorating the Emperor Wilhelm, not Kaiser Bill of World War 1 but his grandfather, who died in 1888. Kyffhäuser was new to me, but a glance at the map showed it to be fairly close to Weimar, in 1928 the centre of the post-1918 German republic.

If this was where Evelyn was going, who was she going to see? Among the same small batch of sketches and documents was a pencil portrait: 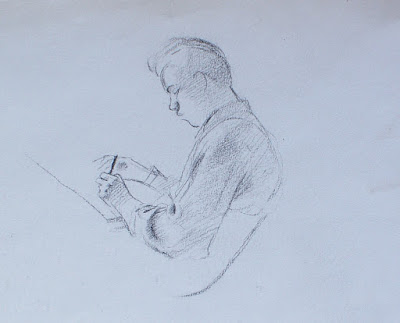 This simple study in profile of a young man, apparently left-handed, shown drawing (rather than writing, taking into account the size of the paper), gives very little away. Who was he? How did Evelyn come to know him? In the absence of any other indication can we assume that they started off as pen-friends? Language appears to have been no problem: Evelyn's spoken German, studied at Rochester Grammar School for Girls, had earned her a special credit in the London General School Examination a few years earlier.

She was shortly to get to know him a great deal better. Another pencil sketch, on the same type of paper as the drawing above, was included in these documents. 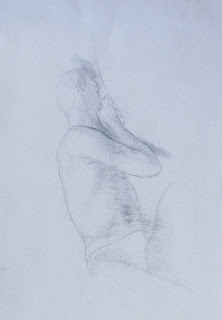 Here he is asleep, dressed in the merest modesty garment. It was perhaps in preparation for moments of intimacy that in June 1928, before leaving for Holland and Germany, Evelyn painted an unusual self-portrait: 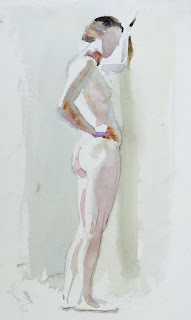 Self-portrait Water colour 1928 Photograph ©Liss Llewellyn
At some stage, perhaps at the end of this German adventure, her friend gave her a little memento of their time together, in stark contrast, it has to be said, with the goings-on at the head of this essay. He signed it, but for me at any rate the signature (in the lower right-hand corner) is undecipherable. Maybe a reader skilled in reading German signatures from almost a century ago could finally put a name to this German, a man with some artistic pretensions, who perhaps lived fairly close to Weimar, who entertained Evelyn for some weeks in the summer of 1928. 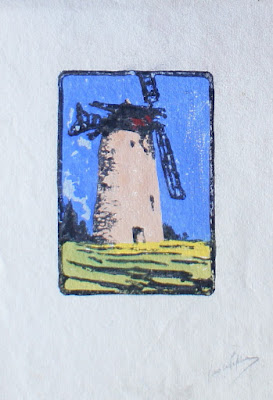 But something traumatic had happened, presumably not on the scale of Water-nymphomania with its Rusalka-like overtones, but wounding all the same. Afterwards Evelyn dropped everything German from her intellectual luggage. Even one or two songs by Franz Schubert that she loved, she sang thereafter in English. She never spoke of this adventure. Was some weeks' cohabitation with a German disapproved of by her family? Was there some post-war anti-German feeling, typically less marked among the younger generation? Otherwise the kindliest of men, was Ronald, the elder of her brothers, who had fought unscathed through World War 1 partly on the Western Front, scandalised by Evelyn's escapade? Had her parents demanded her return? She was 21, all the same, and able to make her own mind up. Many years later, in about 1958, she said to me that she had only known true depression once, and that was arriving once at Dover. As far as I knew she had never been abroad until the 1950s. I asked when this was. 'A long time ago now,' she replied. Maybe there was no connection.
Text ©Christopher Campbell-Howes 2021
Would you like to read more?