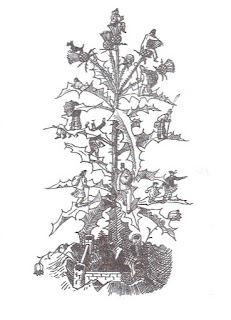 Evelyn Dunbar: Frontispiece to The Scots Week-End and Caledonian Vade Mecum for Host, Guest and Wayfarer (eds. D. and R. Carswell, Routledge, London, 1936)
This and the drawings below should enlarge if you click on them

I glance back for a moment along the straightish path of a chronological unfolding of Evelyn's work to something she started in 1935 and finished the following year. At the time she was working on the Brockley murals, and I find it surprising that she felt able to undertake a book illustration project while her very demanding mural work was still in progress.

In 1935 Evelyn spent much of her life with the artist - and her former Royal College of Art tutor - Charles Mahoney, who was the leading light in the Brockley School mural project. Mahoney and Evelyn shared a studio in South End Road, reasonably enough at the southern end of Hampstead Heath. Near neighbours, in Keats Grove, were Catherine and Donald Carswell, authors and journalists. Catherine Carswell, a Scotswoman who had written controversial biographies of Robert Burns and D.E.Lawrence (her favourable 1915 review of his The Rainbow had cost her her job with the Glasgow Herald) is now recognised, partly through her novels, as a leading proto-feminist.

The Carswells had put together a miscellany, following a briefly popular trend for dip-into bedside anthologies, entitled The Scots Week-End and Caledonian Vade-Mecum for Host, Guest and Wayfarer, of which it might be unkindly observed that you risked falling asleep before reaching the end of the title. In looking for an illustrator I think they had no need to look further than Charles Mahoney, just round the corner in Hampstead, so to speak, if only to consult him. Judging from Evelyn's subsequent correspondence about the subject with Mahoney, it seems probable that he successfully recommended her to the Carswells as an illustrator, maybe partly on the strength of her having illustrated several children's books in the early 1920s.

How welcome Evelyn found the commission is difficult to assess. It was well paid, probably £20 in two instalments, a total of roughly £1200 at 2013 values, but all the same she found it difficult to divert her creative energy from the Brockley murals and her own similarly demanding private work. She wrote to Mahoney in September 1935:

[...] can you tell me why it is that whenever I get going on these blooming Scotch illustrations with vigour and spontaneity all my spontaneous and lively feelings completely desert me, and I am left clutching an unwilling, unwieldy pen, scratching at laborious and second-rate expressions of stereotyped and 5th rate (so it seems to me) ideas? I'm trying my best and I mean to get over it, but jobs of that kind seem to mesmerise me into a kind of stupidity and inability. Write me a few comforting and inspiring lines [...] 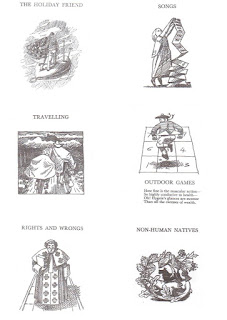 In the light of this maybe it's not surprising that there's such a mixture of styles in Evelyn's drawings. As might be expected, she did her homework, although against much adversity. The frontispiece, at the start of this essay, features a giant thistle, emblem of Scotland, growing out of a ruined castle set among mountains. Its branches are adorned with people and animals undergoing various activities - fishing, hill-walking, dancing, barking - associated with Scotland.

The top left-hand drawing above is the vignette introducing The Holiday Friend, which unexpectedly turns out to be a rather coy and pawky - and decidedly un-feminist - manual of flirtation, even seduction, in Scotland. In several cases Evelyn was not given the text she was supposed to be crystallising, and had to guess.

So The Holiday Friend vignette shows a couple standing on a symbolic heart-shaped pincushion. In Victorian times and a little later such pincushions, with the two pins Evelyn has stuck in them, were tokens of love to be exchanged on or after parting, the pins symbolising the pain of separation. Evelyn's couple are straight out of, appropriately, a Robert Burns poem, O wert thou in the cauld blast:

[Résumé: If you were out in the cold in that field, I'd protect you from the wind with my tartan cloak]

Travelling is in a different style altogether, with Evelyn commenting on the Scottish weather as experienced by two caped cyclists heads down against the rain on a moorland road that has no visible end.

Lower left, to head the chapter entitled Rights and Wrongs (for which Evelyn did not have the text) shows a Scottish High Court judge in full fig.

Lower right, for a chapter called Non-human Natives, we have a brace of grouse, a Scottish or Aberdeen terrier, and a splendid heraldic beast, possibly from the arms of clan MacDonald of Sleat, although I'm not aware of any particular significance in this. 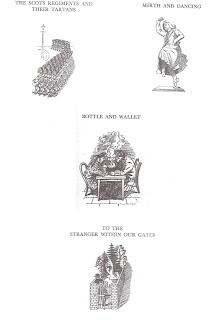 The model for Mirth and Dancing is Evelyn's sister Marjorie, whom we will glimpse again in Gardeners' Choice, the book that followed The Scots Week-End.

Bottle and Wallet is an enjoyably cartoon-like rendering of two ultra-stereotypical Scotsmen of the type that Evelyn was familiar with from the pages of Punch, the satirical magazine founded in 1841. Several leather-bound volumes of 19th century back numbers of Punch, originally from The Cedars, the Dunbar family home in Rochester, eventually found their way to Roger's and Evelyn's bookshelves.

Evelyn's father, William Dunbar, who died in 1932, was a Scot originating from Cromdale, a village and a range of hills on Speyside to the north-east of Grantown on Spey, now in Highland Region. Evelyn was thus half Scottish, but rarely made anything of it. To the best of my knowledge she went to Scotland only twice: once in 1943 to paint Potato Sorting, Berwick and once, during one of Roger's RAF leaves, to climb in the Cairngorms. (On this occasion Evelyn took the opportunity to visit her father's native village.)

Evelyn had a fund of stories which she loved telling. I think the following tale may have come from her father. We can assign it with neither authorisation nor shame to one (or both) of the Scotsmen in Evelyn's drawing:

An ageing and solitary widower, Great Uncle Sandy, had developed certain eccentric culinary habits, characteristic of which was his practice with porridge, to which he referred in the plural as 'them'.
To save himself the trouble of daily preparation, he would make enough in one batch to last him a fortnight.
One morning towards the end of the second week the residual crusts and scrapings looked so unappetising that not even Uncle Sandy could face 'them'. But at length he hit upon the notion of placing the one luxury he allowed himself, viz. a dram of malt whisky, in front of his porringer, promising himself this treat once 'they' were finished.
Slowly and painfully he forced himself to consume 'them' until at last his porringer was empty, whereupon, with that truly Scottish tendency to defer gratification, he lifted the glass, observed 'Weel, Sandy, my man, ye're gey easily fooled!' - and poured the whisky back into the bottle.

Evelyn's final drawing introduces the last chapter of The Scots Week-End, entitled To the stranger within our gates. Her admonitory finger warns all who tease the Scots. H'm...

EVELYN DUNBAR : A LIFE IN PAINTING by Christopher Campbell-Howes
is available to order online from
http://www.casematepublishing.co.uk/index.php/evelyn-dunbar-10523.html
448 pages, 300 illustrations. £25
Posted by Christopher at 18:40:00