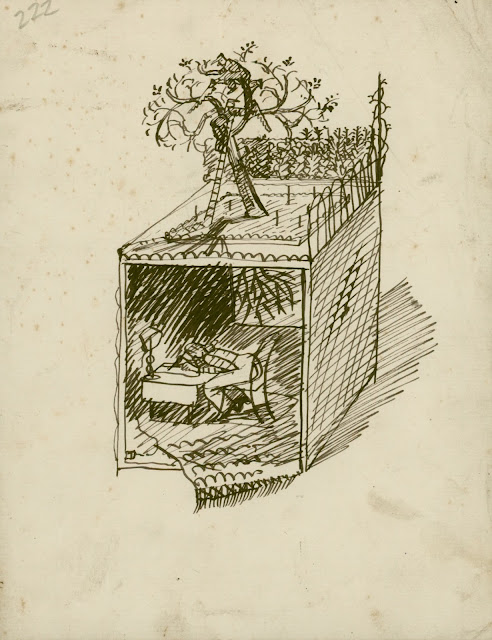 
A wry and satirical little drawing found tucked into a portfolio of bits and pieces which only came to light more than half a century after Evelyn's death says something about how she saw herself and her purpose in relation to the natural world she inhabited. There is no date, title or other indication of when or why. The suggested title is mine. Please feel free to change it if you want. The style suggests the 1940s or early 1950s.

Evelyn has created an underground studio for herself, beneath an apple tree, whose roots penetrate through the ceiling, absorbing whatever virtue emanates from her studio and thereby nourishing the tree above. She is bent - literally, indeed double - in deep concentration on her drawing, her work illuminated by an electric lamp plugged into a socket at the foot of the wall. The cable travels up the outside of the studio wall and loses itself somewhere in the ambit of the tree, from which it takes its energy. The cycle is complete, the synergy between man and creation is self-contained and perfect: the apple tree feeds and powers Evelyn's vision, in turn she nurtures the tree. And all would be well if there were not two men in the tree, armed with saws. If they are pruning - the season, always a vital presence in Evelyn's work, appears to be spring - they are doing so very ignorantly, because they are cutting off the two main branches, and it will take several years, and much feeding from below, before the tree grows fruiting branches again. Clearly her message has not carried and she is going to have to work much harder. Maybe 'Back to the Drawing Board' would be an equally appropriate title.

Others may wish to observe more in this than I believe Evelyn intended: a) that the workers in the tree are men rather than women, and b) that they are not pruning at all, but preparing in the correct manner to cut the entire tree down by first lopping off the branches, thereby depriving the hungry of its fruit and excluding Evelyn from her personal partnership with creation.