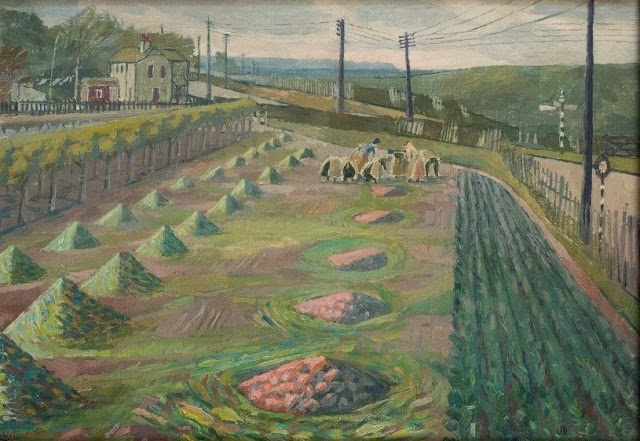 
There's a little confusion, nothing very important, over the title Land Workers at Strood. This is what's written on the frame in Evelyn's handwriting, or her hand with capital letters. She probably started it in the autumn of 1938, completing it in time to show it in March 1939 in The Blue Gallery, the gallery she opened in a large room above her sisters' haberdashery shop in Rochester High Street. The Blue Gallery was yet another in that series of setbacks that dogged Evelyn's career in the years 1938-40. Nothing sold, despite contributions from some of the leading artists of the day, among them Edward Bawden. By the end of March 1939 Evelyn was returning exhibits. 'The show is finished', she wrote to Bawden on March 30th. 'Herewith the pictures you so kindly sent [...] The show was a great success as regards lots & lots of people coming to it, & it looked lovely but - no sales at all!'


A year or two later, when she was well established as a war artist, she tried again, including it in an exhibition at Derby with Joseph's Dream. The catalogue ascribed works entitled Field Workers at Strood and Land Workers at Strood to Evelyn. It's probable that there's one painting with two similar titles. (A couple of posts ago we came across similar confusion with Mrs Dunbar and Paul and Mrs Dunbar and the Snog.) It still didn't sell, and as far as I know it was never seen again until it appeared in the remarkable discovery of Evelyn's residual studio, the Hammer Mill Oast Collection, in 2013, half a century and more after her death.


Whatever its definitive title, Land/Field Workers at Strood can be admired for its subtle palette of colours, for the baffling nature (beetroot clamps?) of the activities undertaken, and appreciated for an interesting perspective on the slant, with Evelyn's preferred left-to-right travel and slightly elevated picture plane. If not much else has been achieved in the immediate pre-war years, she has managed to scale up the metaphor of the garden to that of the field, just in time to accommodate the vastness of the coming conflict.


Where is the setting? Strood is that part of Rochester on the west bank of the river Medway. It's where Evelyn lived from 1924 until 1945, in a large house (as we've seen in many earlier posts) called The Cedars. The postal address (before postcodes) was The Cedars, London Road, Strood, Rochester, Kent. London Road stretches from riverside Strood up the hill until flatter land is reached at a place called Gadshill, where Charles Dickens lived for a while and where in Shakespeare's Henry IV Falstaff had certain mendacious adventures with highwaymen. No highwaymen, presumably, on the day in that autumn of 1938 when Evelyn bundled up her easel and materials and walked or cycled up the hill from The Cedars to Gadshill to record this scene.