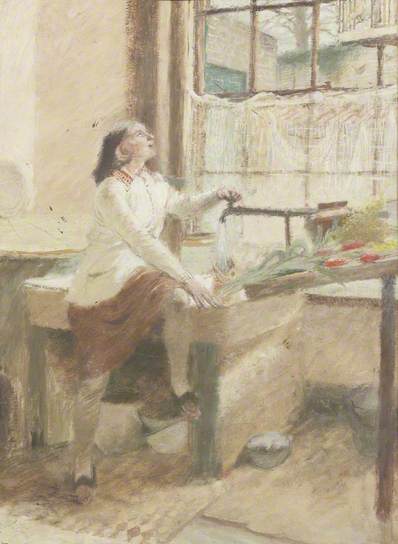 Girl and a Birdcage is set in the scullery in The Cedars, the Dunbar family house in Strood, Rochester, Kent. Like the previous post, the subject is Evelyn's sister Jessie, who has just brought in an armful of tulips, daffodils and forsythia. A pale spring sunshine is flooding the room. Jessie is perched on the edge of the large glazed earthenware sink, filling a jug with water for the flowers. There are more bowls and pots beneath the sink. The surround sound, often hinted at in Evelyn's work, is almost as important as what is seen. The spring sunshine has encouraged the canary in the cage in the top right-hand corner to sing: this canary, or one of its friends, we've seen already: it appeared, more clearly defined, in Study for Decoration - Flight.) The water will be gurgling into the jug and maybe overflowing if Jessie does not pay attention, because Evelyn's brush has caught her sister when she too is singing. What she is singing remains a mystery: Tiptoe Through the Tulips, or even I Lift up My Finger and I Say Tweet-tweet, both of which came out in 1929, need not necessarily be taken as serious suggestions.

Girl and a Birdcage was the earliest of Evelyn's paintings to be thought of sufficient stature to be bought by a gallery, admittedly a few years after it was painted. In 1934 Sir William Rothenstein, Principal of the Royal College of Art, from which Evelyn had graduated the previous year, bought it for the Carlisle City Art Gallery. Rothenstein, always ready to promote his former students, had instituted a fund at Carlisle for the acquisition of works by up-and-coming artists, with himself as Honorary Advisor. He arranged for Evelyn to be paid £5 for Girl and a Birdcage, £328 at 2017 values.

EVELYN DUNBAR : A LIFE IN PAINTING by Christopher Campbell-Howes
is available to order online from
http://www.casematepublishing.co.uk/index.php/evelyn-dunbar-10523.html
448 pages, 300 illustrations. £25
Posted by Christopher at 08:10:00