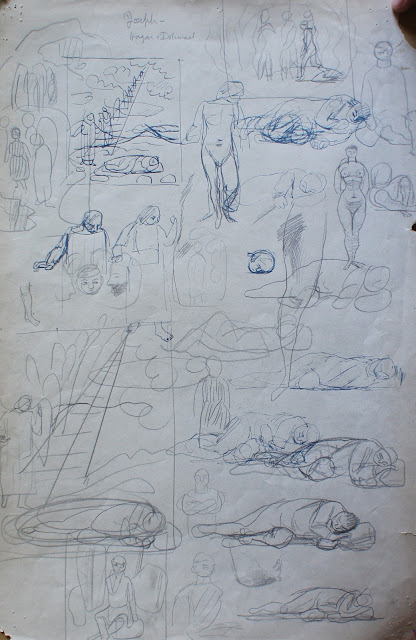 
'Epiphany' isn't a word that you can use very often. In an already visually rich lifetime I've had perhaps half a dozen really humblingly sublime visual experiences. One was opening the back door of our house in the north of Scotland to let the dog out one February night about 30 years ago, and being unexpectedly, and for the first time, treated to the full enchanting magnificence of the Northern Lights. Another, years later, was at home in the south of France, when one autumn night the valley we live in was filled with mist and light drizzle upon which the full moon in another part of the sky cast a lunar rainbow, a moonbow, something eerily mysterious and unsettling. (Others, more personal, would hardly embellish this blog.)

The most recent epiphany was seeing the entirety of Evelyn's sketches, plus much completed work, on its rediscovery in 2013 after lying hidden and forgotten for half a century and more in a Kentish oast house. They story of what came to known as the Hammer Mill Oast Collection as been told often enough not to need retelling here, but a reminder of the sheer quantity may be useful: it consisted of about 900 pieces of work, vastly increasing Evelyn's known output, and bringing into much sharper and more compelling focus the background against which she might be considered as one the United Kingdom's most important artists of the mid-20th century.

900+ sheets of cartridge paper there might have been, but the number of drawings contained on them was very much higher, somewhere in the tens of thousands. Evelyn rarely threw anything away, so sketches and studies and experiments and workings-out and doodlings and notes survive from her teens until shortly before her death. She was economical with her cartridge paper, using both sides, as well as odd corners and spaces, over long periods of time, so that examining these sheets is something like an archaeological dig, revealing elements from several different periods and sometimes detailing the evolution of a picture: priceless primary material for the art detective and biographer.

The sheet above is typical. It's covered in sketches, in workings-out, of the figure of Jacob in Jacob's Dream, her last painting, finished just before she died. Comparison between the sketches of the sleeping Jacob are interesting, but more revealing is Evelyn's original intention, as in the sketches above, to have Jacob's stairway to heaven peopled with more or less human shapes: at what point did she decide on those phenomenal abstract blocks of primal white in the finished version? What potent epiphany made her change her mind? And tantalisingly, she has written 'Hagar and Ishmael', referring to another The-Lord-will-provide story in the Jacob-Joseph saga in Genesis. Some of the sketches may refer to it, but it's doubtful if she ever painted it.

For better or worse, the portfolios have now been irrecoverably broken up. Occasionally some appear on the market, sometimes featuring more-or-less finished drawings cut from a sheet of doodles and experiments. I've been enormously privileged to see them all. Here in a random selection are a few that have given me a great deal of pleasure, and I hope they will please you too. 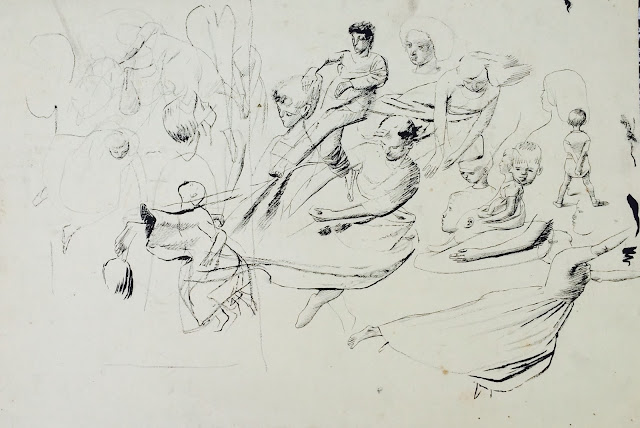 As far as I know none of these images prefigure or resonate with any people in any of Evelyn's work. What are they reacting to? Should they be taken individually or collectively? Is there any connection between them? Together they suggest an enormous joyous energy, as though they had all suddenly discovered they could fly. Except maybe the little boy with his back to us on the right. 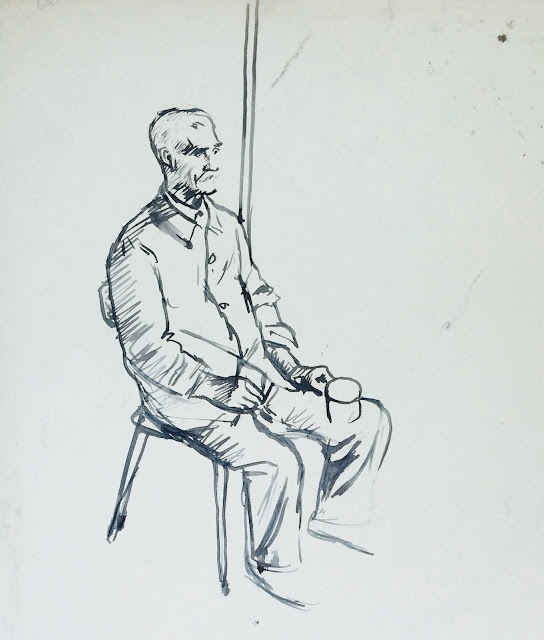 Possibly a Mr Pratt, caretaker at Brockley School for Boys in the 1930s, but this isn't much more than a guess. 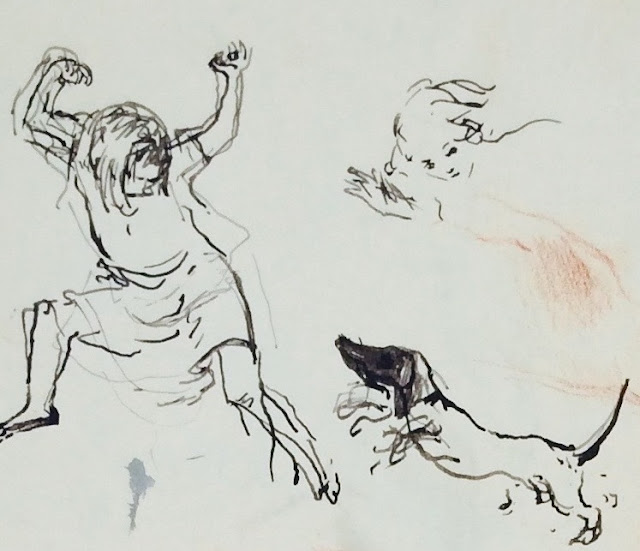 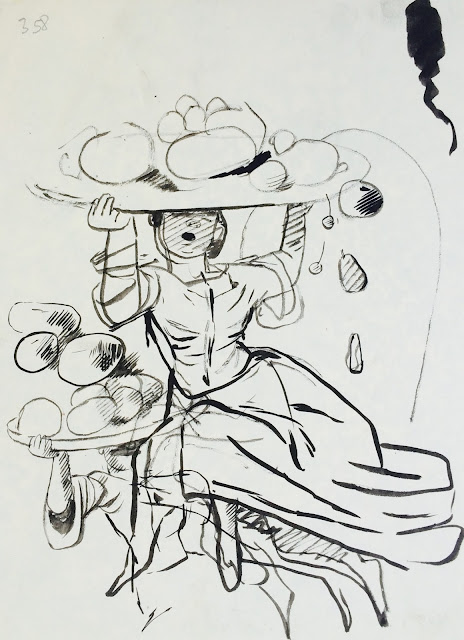 Sketches for Pomona, Roman goddess of fruits, which eventually became a 1947 greetings card. Evelyn intended Pomona to be crowned with a hat laden with fruit. She has recreated the disaster-moment when the carefully balanced fruit began to fall off. The model was my mother Joan. 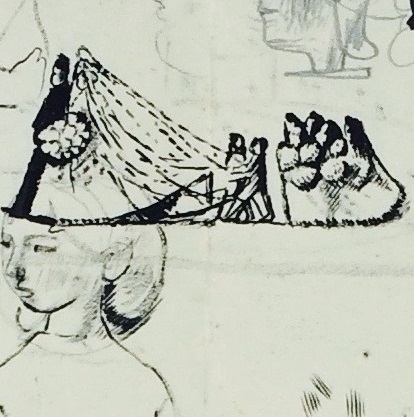 Typical of the extraordinary and unpredictable variety of Evelyn's sketches and the warm brilliance of her invention is this, where the woman's hat - how Evelyn enjoyed playing around with hats! - has turned into a wedding procession, with pages and a bevy of bridesmaids. (Photograph ©Christopher Campbell-Howes) 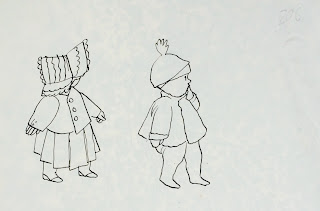 Evelyn's older sisters, Jessie and Marjorie, ran a children's clothes shop in Rochester High Street. Sometimes Evelyn produced artwork for them, and this is probably where this pair of toddlers was bound for. Finally, Felbridge, done in pen and ink and wash in about 1922. He was the Dunbars' dog, adopted in 1913. Named after the Sussex town from which he presumably came, he lived for about 16 years. After his death his place was taken by a terrier called Paul. Both dogs appear (Felbridge posthumously) in 'Hunters and Hunted', an extravaganza by Evelyn to be looked at in due course.