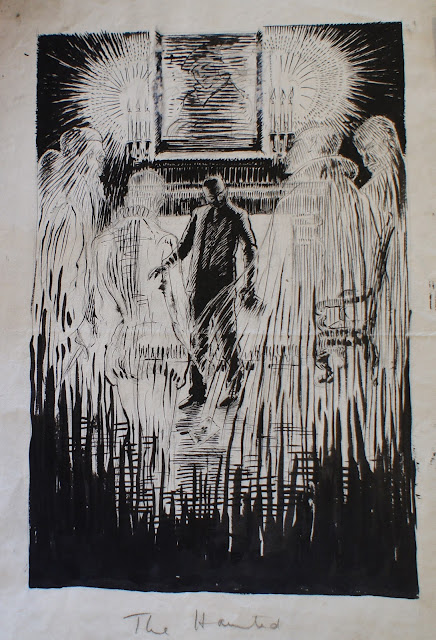 
Perhaps as an antidote to the goody-goody Goldilocks images of children (see the previous post) which preoccupied her in the years immediately after leaving Rochester Grammar School for Girls (which she sold to various publishers of children's books and stories), she began to show another, darker, side to her vision, equally short-lived.

Goodness knows what's going on in The Haunted. A man in modern dress appears to have got up out of an ornate antique chair in some agitation. He has dropped, or has seen on the floor, a playing card, maybe the ace of clubs. He's surrounded by four ghostly men in Tudor costume, the figure on the left ominously clutching a dagger. Overlooking the scene, from a picture frame brilliantly lit by candles, is an enigmatic figure. Man or woman? I don't know. Is there a cruel smile playing about his/her lips? Is a terrible revenge for some historic crime about to be wreaked?

This is not typical Evelyn. In a sense it's refreshing to see her widening her horizons, even with forays into the Gothic, as well as exploring new media, in this case pen and Indian ink. The answer to what The Haunted is about may be that, like her early children's drawings, it's an illustration for a novel or serial story in a magazine and not a stand-alone work. To me it has the feel of a frontispiece. If this is so, The Haunted isn't the only example of Gothic/horror illustration she ever undertook, although my second example comes from almost ten years later. 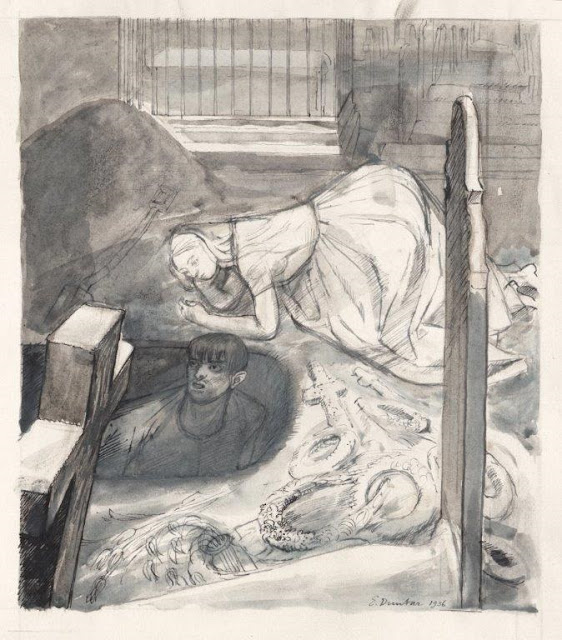 
In 1936 Evelyn submitted an entry for a competition organised by Signature, an ephemeral art magazine. The subject was to be an illustration of a passage from Emily Brontë's Wuthering Heights, and indeed here we have Catherine and Heathcliff in the context of a freshly-dug grave; in the upper left-hand middle ground there's a spade leaning against a pile of what Emily Brontë calls 'mools', an old Yorkshire word meaning earth dug out to make a grave. Rather than showing an actual episode from Wuthering Heights, Evelyn's drawing is more likely to be illustrative of Catherine's Chapter 12 raving: We've braved its [Gimmerton Kirk] ghosts often together, dared each other to stand among the graves and ask them to come...But Heathcliff, if I dare you now, will you venture? If you do, I'll keep you. I'll not lie there by myself: they may bury me twelve feet deep, and throw the church down over me; but I won't rest till you are with me...I never will!

Evelyn took some of her burial ground images from the graveyard of St Nicholas' church in Strood, the parish church in which in 1942 she would be married to Roger Folley. Her drawing didn't win the competition, and indeed drew some fairly savage censure from the adjudicator, Kenneth Clark, then director of the National Gallery, later to become Lord Clark, who thought Evelyn's drawing inexpressive and lacking in significance. Maybe he had a point: Heathcliff, and Catherine particularly, do appear less intense than might be expected and not really touched by the dreadful eventuality of her dying rant. The Gothic really wasn't Evelyn's forte.

A more appealing pen-and-ink drawing in a completely different vein comes from about 1926, when Evelyn attempted a series of cartoons for illustrated magazines like the now-defunct Punch: 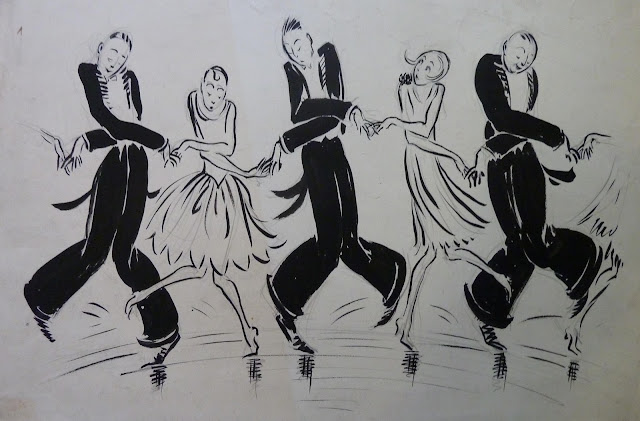 Evelyn's skit is metamorphosing the Charleston, then at the height of its popularity, into hands-across Auld Lang Syne, as sung traditionally at New Year. It's not known whether she sold it, but I hope she did. For a lot of money.

EVELYN DUNBAR : A LIFE IN PAINTING by Christopher Campbell-Howes
is available to order online from
http://www.casematepublishing.co.uk/index.php/evelyn-dunbar-10523.html
448 pages, 300 illustrations. £30
Posted by Christopher at 17:53:00