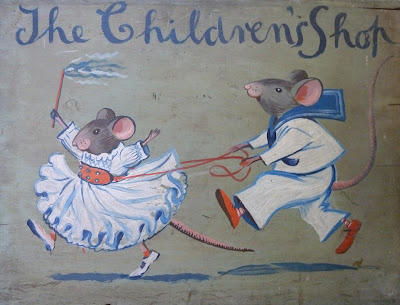 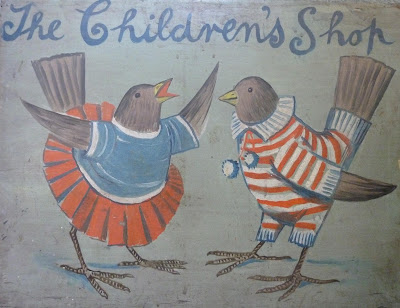 
This curious artefact appeared among Evelyn's so-called Lost Works in 2013. The story is probably familiar by now: after her death in 1960 Evelyn's husband Roger Folley gathered up the contents of her studio, consisting of some 900 pieces of artwork, major and minor, and passed it all on to her family. The collection, swollen further by paintings by Evelyn's mother Florence Dunbar and her aunt Clara Cowling, lay forgotten in the cone of an oast house for some 50 years before it saw the light of day again. I took these photos in their unredeemed state, before the panel passed into the care of Liss Llewellyn Fine Art to be cleaned - it certainly needed it - and presented to the public.

Evelyn had two older sisters, Jessie and Marjorie, born close enough together in the late 1890s as almost to be twins. In due course they followed in the family commercial tradition by opening The Children's Shop in Rochester High Street. By 1938 the Dunbar presence along Rochester High Street had grown to a mini-empire of shops, an expansion in disturbing contrast to the deeply uncommercial Evelyn's career, which had fallen into the doldrums, not without causing a little inter-sibling tension. 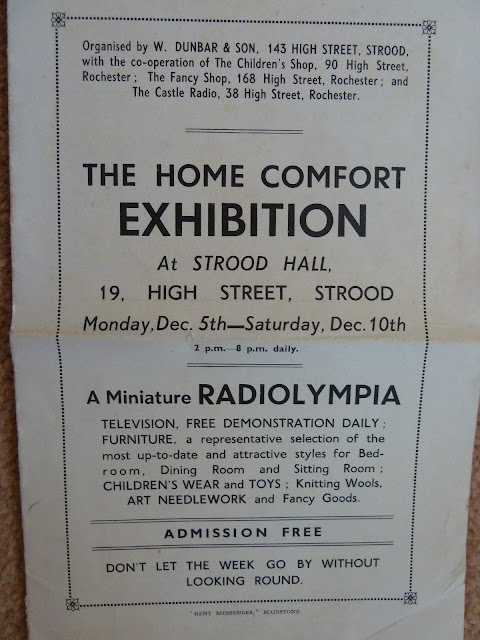 Catalogue cover for the Dunbar Home Comfort Exhibition, December 1938. (Strood is that part of Rochester on the west bank of the Medway.)

Evelyn was roped in to take part in a grand Dunbar festival of commerce entitled The Home Comfort Exhibition, held in December 1938. She contributed several pieces of artwork, including this panel, designed to be suspended from above like an inn-sign, with birds on one side and mice on the other. Evelyn was fond of mice, or at least acceptably anthropomorphised versions of them. For many years she had a mascot, a carved wooden mouse dressed in a bouffant dress something like the mousette above, which sat on a bookshelf in the kitchen. Her early letters to Charles Mahoney (former Royal College of Art tutor, later colleague and lover) were sometimes decorated with mice, until the sometimes impatient Mahoney put his foot down. 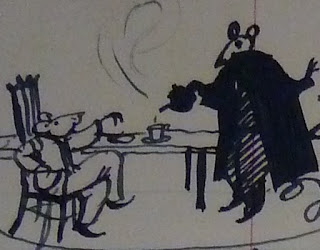 Mouse morning break: detail from a letter to Charles Mahoney, 25th June 1933. The black-gowned figure is Dr Sinclair, Headmaster of Brockley County School for Boys, where Evelyn was painting.The other mouse, stretching out a paw, is presumably Mahoney, as at the time only he and Evelyn were working on the Brockley Murals.


At some time during the later war years Evelyn illustrated two journals of climbing holidays in the Lake District written by Roger Folley, with all the protagonists featured as mice. The one below shows Roger Folley leading, Evelyn roped up to follow, and, bringing up the rear, their friend Glynn Burton. There's more about one of these expeditions here. 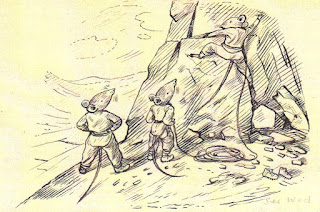 Pen and ink illustration from Roger Folley's An Episode in the History of the Lake District, 1941. The only original copy is in the Tate Archive.


Hardly great art, maybe not even the crumbs from the table of a greater banquet, but there's a certain charm and captivation in Evelyn's playfulness and sense of fun, mice or no mice.

EVELYN DUNBAR : A LIFE IN PAINTING by Christopher Campbell-Howes
is available to order online from
http://www.casematepublishing.co.uk/index.php/evelyn-dunbar-10523.html
448 pages, 300 illustrations. £25
Posted by Christopher at 15:16:00