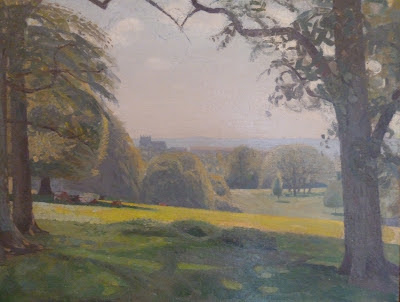 
Evelyn produced this most finished of her known landscapes in time for her only solo exhibition, held in the autumn of 1953 in Swanley Hall, Withersdane, a residential and administrative premises of Wye College. The exhibition was entitled 'Evelyn Dunbar - Paintings and Drawings 1938-1953'. There were 26 exhibits in all, many borrowed back from the Imperial War Museum, from other galleries and from private individuals to whom she had given or sold paintings. Her multi-frame An English Calendar was already there.

Olantigh is an estate north-east of Wye, in Kent. We're in early summer, maybe a year or two earlier than 1953. It wasn't a commission. It was painted for no other  - or better? - purpose than of recording a scene which pleased her. She may have had its eventual sale in mind. In the early 50s Evelyn had a loose arrangement with a London dealer, but her delivery of work was so erratic that the arrangement petered out. As always with a painting that particularly pleased her or which stated something important to her, she devoted a great deal of time, sometimes years, to finishing a canvas, that is - in Evelyn's case - giving it a depth of paint to exclude any suggestion of the canvas beneath. Certainly in Wye from Olantigh she has taken time to build up the relative thicknesses of layers of greens and yellows to express the intensity of the midday sun on the lush pastures of May in Kent, the Garden of England, although the outer branches and foliage do not have the same precision as, say, in A Land Girl and the Bail Bull.

These trees, beeches, oak and elm, are in full and proud leaf. Elm would disappear some 15 years later, victim of the Dutch elm disease which progressively destroyed all mature British elms as it moved northwards. The same view today would have several gaps in it, including the repoussoir trees on the left and right edges which lead the viewer's eye downwards towards the cattle in a shady nook and the blue-grey silhouette of the squat tower and nave of Wye Church, maybe half a mile away. A magical touch, worked with the tiniest of brushes, is the outline of the tower of Ashford Church on the horizon, some eight miles away in the heat haze. (It may not be visible in the photo above.)

Pure landscape is one of the least known of Evelyn's activities. By 'pure' I mean landscape undertaken for the pleasure of recording it, not as the moral and symbolic backdrop against which so many of her outdoor dramas, especially the allegories and her wartime Women's Land Army paintings, are played out. Her pure landscapes, like Wye from Olantigh, are simply unadorned and unsentimental portraits of 'a landscape loved and worked in equal measure'. They are invariably - as far as I know: so much may be lost - of The Weald, that area of mostly fertile farmland and woodland of Kent and Sussex cradled by the North and South Downs.

In a sense her landscapes are the small change of her output. I suspect she gave many away as mementoes to friends or pupils. In an earlier essay I mentioned Evelyn's obituary in The Times, which presumably for lack of more accurate information claimed that after World War 2 she painted little but was 'absorbed in country pursuits'. I've sometimes wondered what the obituarist meant. Did she ride to hounds, make corn dollies, breed pheasants or angle for eels in the river Stour? (None of these sounds remotely like Evelyn.)

However country walks were a staple of her existence, and on the many country walks I remember sharing with her she was never without pencil and sketchbook. She would often stop to set down a field gate, a clump of trees, the set of some coppiced hazels, a bramble thicket, some middle-distance roof-tops, whatever.

This was her often daily communion with the land she loved. If there was something that especially took her eye she would return later, with easel and water-colours. Some artists feel a need continually, over and over again, to draw or paint a person they love, in all lights and circumstances and moods: with Evelyn it was the land. There was no need for the spectacular, snow- or cloud-capped mountains, waterfalls, rough seas; nor for anything chocolate-box or postcard-worthy, cottages with roses round the door, shepherd's delights: the Wealden landscape was enough and more.

Here is another example of Evelyn's day-to-day landscape work. It's not so highly finished as Wye from Olantigh, but it's a simple, unpretentious and uncomplicated account of The Weald. A label on the back in Roger's handwriting, which tells us something about its provenance, says Sussex Landscape. People who know East Sussex well may identify it, if that's important: a clue may lie in the distant ring of hill-top trees on the right-hand horizon. Evelyn had an aunt, Clara Cowling, who lived in a house called Steellands (now called Apsley Court) at Ticehurst, whom she used to visit sometimes: maybe the view southwards towards the South Downs on the horizon is taken from near Ticehurst.

The land fed her, visually, imaginatively, spiritually and of course physically. Without it there was nothing. There was no alternative means of survival. It was the Creator's gift to mankind, a gift made in return for caring for it. Evelyn put a Christian Scientist gloss on this, finding the clearest expression of it in the Abraham-Jacob-Joseph saga in Genesis, summed up in the words 'the Lord will provide'.

The transmission of this message was her life's work. Love the land, look after it, and it will never fail you. This is the Creator's promise.

It's typical of Evelyn that she should have transmitted these ideas so positively. Only once in all her work, in a central feature of the late Autumn and the Poet, does she emphasise the negative, what will happen if you don't look after the land. Throughout her work there's the same trust, cheerfulness, contentment, happy acceptance of the condition the Creator has laid down for mankind's survival.

After Evelyn died, unexpectedly at the age of 53, Roger was left with the problem of what to do with all her remaining work. In a store room adjoining her studio there were stacks of canvases, maybe 50, not to mention bulging portfolios of her other work, drawings, water colours, pastels, sketchbooks and all the paraphernalia of an artist who rarely threw anything away. Among the paintings was Wye from Olantigh, which Roger gave to his sister and which has been in the family ever since. One or two remaining paintings were sold, and most of the rest, including an unknown number of everyday landscapes, were given away to friends and family.

Sussex Landscape was also among the 10 or so paintings which Roger kept. Towards the end of his life, in 2007, by which time he was very blind, he set about disposing of them suitably. At an especially poignant moment he asked me, by letter, if I would like a landscape called Sidelands by which to remember Evelyn. (The Cerebrant, which I would have preferred, had already been donated to Manchester Art Gallery.) Conscious of looking a gift horse in the mouth, I replied that didn't know of it. Roger said he would send me a photograph of it, and this is what arrived a few days later: 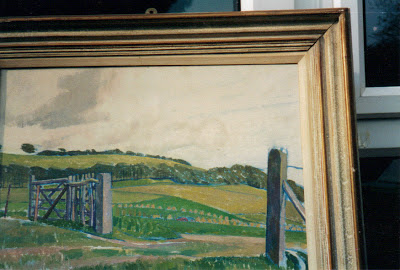 
Roger's sight was too poor for him to aim the camera accurately. I would have loved this painting, with its open gate inviting and admitting the viewer through to the tidy, organised farmland beyond, just as in the Brockley mural The Country Girl and the Pail of Milk, an invitation carrying all that Evelyn stood for. I wrote to Roger accordingly, but when I arrived by car from France a month or two later to collect it, he had donated it to Wye College. In his blindness he had confused Sidelands with Sussex Landscape.