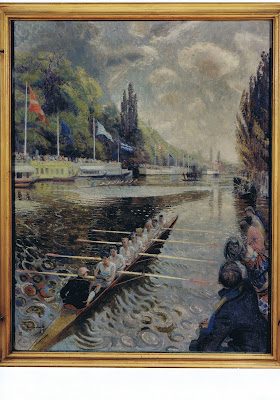 In July 1946 Roger Folley, Evelyn's husband, successfully applied for a post with the Oxford University Economics Research Institute. As a result he and Evelyn left their cottage in Long Compton, inconvenient both in its size and distance from Oxford. They moved to Enstone, nearer to Oxford, to The Manor House, a premises much less grand than its name suggested. Here Evelyn enjoyed much better studio accommodation than at Long Compton.

Having moved to Enstone Evelyn, who had already been teaching at the Oxford School of Art since December 1946, made contact with the Ruskin School of Drawing and of Fine Art. Master of Drawing at the Ruskin School was Albert Rutherston, the younger brother of Sir William Rothenstein, one of the great men of British art in the inter-war period. (Because of the current anti-German feeling, Rutherston had anglicised his surname during the First World War.) Sir William Rothenstein had been a generous patron and good friend to Evelyn until his death in 1944, and it may be that she was acquainted with his brother.

At any rate, Evelyn was appointed Visitor, an interesting post requiring only occasional attendance. She already knew several of her fellow Visitors, some as close friends, either from her student days at the Royal College of Art, or as fellow professional artists, although their visits did not necessarily coincide: Barnett Freedman, Muirhead Bone, Allan Gwynne-Jones, John Piper. Albert Rutherston retired in 1949, and Percy Horton, who had been one of Evelyn's tutors at the Royal College of Art and who had kept in touch with her ever since, became the new Master of Drawing. Evelyn felt among friends and very comfortable at the Ruskin, continuing her Visitorship long after she left the Oxford area to live in Kent.

It was via the Ruskin School that Evelyn was commissioned by Worcester College Junior Common Room to paint Summer Eights. Worcester College JCR, like several other Oxford colleges, maintained a fund for the purchase of art works 'by the younger British artists', to quote a contemporary outline of the scheme. (In 1947, when the commission was placed, Evelyn was 40.) There's a little uncertainty about the title. The official title was The River in Eights Week 1922. However, Evelyn's painting was reproduced in a book engagingly called To teach the senators wisdom, or an Oxford guidebook, written in 1952 by the then Provost of Worcester College, J.C. Masterman, where it is entitled The river Eights Week, 1922. Evelyn, who included it in the only solo exhibition she ever put on, in Wye College, Kent, in 1953, always referred to it as Summer Eights, but then in Oxford terms 'Summer Eights' and 'Eights Week' are synonymous.

In the summer of 1957 I spent a week with Evelyn at Bletchley, in Buckinghamshire. She was working on a mural project which I believe was later abandoned. She and I stayed that week with some Oxford friends of Evelyn's who had a house on the Woodstock Road. During this week she took me to Worcester College to see Summer Eights. I'm glad to have seen it (although I'd already seen it once at Evelyn's 1953 exhibition), because it's very doubtful if another opportunity will arise for me, or for that matter anyone else, to see it: Summer Eights was stolen in 1994.

I wish I could find any significance in the date 1922 in the alternative titles. The river is the Thames, or that Oxford stretch of it called the Isis. Despite its name Eights Week is a four-day rowing regatta held annually in May, during which coxed 8-man or 8-woman boats from the various Oxford colleges try to out-row each other. As the Isis is too narrow to allow side-by-side races, something which doesn't really come out in Evelyn's painting, the tournament is organised, after many preliminary heats, on a pursuit basis. A successful pursuit occurs when the following boat catches up with and touches, or 'bumps' the boat ahead of it. The eight which manages to out-bump or out-row all the others is deemed Head of the River.

At first I imagined that Worcester College had become Head of the River in 1922, and on checking this I was surprised to find that Worcester College had never attained any Eights Week honours, although their 2nd VIII had won a similar tournament, then known as Torpids, in February of that year. For a moment I wondered if Evelyn had painted the Torpids, and not the May competition at all. However, if she had meant Torpids she would have called it so, or would very soon have been corrected. In any case there are far too many leaves on the trees for the scene to be set in February.

Gill Clarke, Evelyn's biographer, surmises that 1922, when New College became Head of the River, was the heyday of Oxford University rowing, and thus her painting celebrates the overall event rather than any individual triumph. Certainly Evelyn has captured a sense of occasion, maybe as envisaged from an upstream point like Folly Bridge. The college boathouses, sometimes shared between rowing clubs, line the left bank, beneath the trees bordering Christ Church Meadows. Some boathouses are identifiable by the rowing club flags flying above them: Exeter, Lincoln and Oriel colleges are among the first four on the left. The pink cap and black blazer of the cox in the foreground denotes, as might be expected, the Worcester College VIII. Close examination of the rowers' kit and their oar-blades also suggests Maltese crosses, the badge of Worcester College Boat Club.

Supporters crowding the boathouse roofs put me in mind of an Edwardian novel Evelyn knew and had on her bookshelves, Max Beerbohm's 1911 Oxonian fantasy Zuleika Dobson. At the novel's climax, the entire - minus one, the egregious Noaks - Oxford undergraduate population, taken by Beerbohm as then exclusively male, throws itself into the river during Eights Week for love of Miss Dobson. (Having wrought this havoc, Miss Dobson requires her lady's maid to find out times of trains to Cambridge.) The right bank is also well peopled, including an engaging girl looking round and up at the college-scarved adult next to her: Evelyn has painted her with the minimum of detail but summarises her character and happy mood with a few deft brushstrokes. The slightly disturbed water surface, mirroring the boathouse flags, is exquisitely painted, a little foray into impressionism that Evelyn enjoyed now and then.

The painting is very soundly constructed, and seasoned viewers of Evelyn's paintings will instantly recognise the left-to-right directionality and the skilled mastery of a perspective in which one of the major lines is provided by the boat itself. I can't interpret confidently what the Worcester College crew is doing. Resting on their oars? Waiting for the start gun? The other crew, in the middle distance, is clearly working very hard. The perspective lines lead us, figuratively, to the head of the river, and the objective of it all, and maybe this is another of Evelyn's gentle visual puns.

Summer Eights is an exceptional painting. Although it could be claimed that most of Evelyn's war paintings represent a message-loaded reportage, this is the only painting from Evelyn's hand which celebrates her approximation of an actual past event purely for the joy of it. The thief knew what he or she was stealing.

Many thanks to Emma Goodrum, Archivist of Worcester College, Oxford, for her help in the preparation of this commentary.

EVELYN DUNBAR : A LIFE IN PAINTING by Christopher Campbell-Howes
is available to order online from
http://www.casematepublishing.co.uk/index.php/evelyn-dunbar-10523.html
448 pages, 300 illustrations. £25
Posted by Christopher at 14:20:00