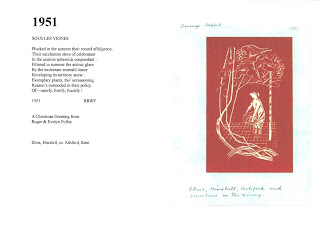 
These images should enlarge if you click on them

By the time Evelyn and Roger prepared their 1951 Christmas card they had already lived in The Elms, a pleasant late Victorian (1884) house half a mile or so from the Kentish hamlet of Hinxhill, for about a year. One of the features of this house was a modest conservatory built on to the west wall, with access from the garden and directly from Evelyn's studio.

Evelyn's design shows a faceless woman, the sort of Flora or Pomona or deity in representing Nature that we've seen in earlier Christmas cards, balancing a basket of grapes on one knee, surrounded by a vine from which stylised bunches of grapes hang. The prop on the right really did exist: the vine spread over most of the underside of the glazed roof and needing propping up. Beneath the drawing she has written 'Elms, Hinxhill, Ashford and sunshine in the vinery'.

SOUS LES VIGNES [Under the vines]

Plucked in the autumn their rotund effulgence
Their saccharose store of celebratant
In the azurine spheroids conpendant:
Filtered in summer the actinic glare
By the exuberant emerald tissue
Enveloping its territory anew:
Exemplary plants, tho' unreasoning,
Reason's outmoded in their policy
Of - ramify, fortify, fructify!

They called this conservatory the 'vigne'. It was here that Evelyn painted my portrait, to be featured in a forthcoming essay, in 1954. 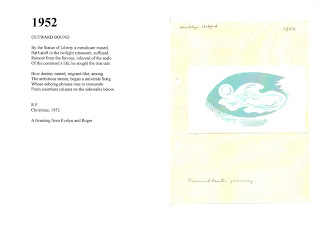 I pause briefly to reflect on what a useful gift annual Christmas cards of this type are to chroniclers and biographers.

By the Statue of Liberty a mendicant mused,
Half-aloft in the twilight rubescent, suffused.
Remote from the fervour, relieved of the scale
Of the continent's life, he sought the true tale:

How destiny nested, migrant-like, among
The ambitious stones; began a universal Song
Whose echoing phrases rose in crescendo
From countless citizens on the sidewalk below.

Evelyn's illustration shows a female figure, another Flora or Pomona, clutching branches in either hand, cradled in an ectoplasmic cloud with a symbolic sun as its head. She has written 'Transatlantic journey' beneath. The reference is to Roger crossing the Atlantic to take part in a series of conferences in New York and elsewhere on the economics of fruit growing. On the outward bound leg of the journey he would have travelled with the sun, consistently with Evelyn's design. At the base of the design there's a suggestion of the Atlantic, which is relevant in an unexpected way: Roger (who went on his own) sailed to the United States, not simply because in 1952 the transatlantic passenger air service was fairly undeveloped, but also because after his wartime experiences he decided he never wanted to fly again. 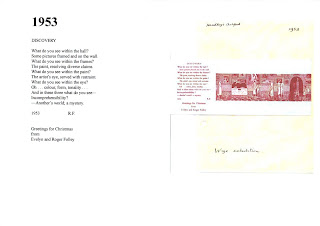 DISCOVERY
What do you see within the hall?

In the late autumn of 1953 Evelyn held the only retrospective solo exhibition of her career. It took place in Swanley Hall, Withersdane, a residential and administrative part of Wye College, a short distance outside the village. Evelyn's Christmas card design, underneath which she has written 'Wye exhibition' is simply about art exhibitions in general, not specifically about hers, so the work on display has no reference to her own paintings.

The exhibition was entitled 'Evelyn Dunbar - Paintings and Drawings 1936-1953'. In order to assemble the 26 paintings and drawings she had to 'borrow' most back from the galleries and private individuals into whose hands they had passed. An English Calendar was already in Withersdane (where it still is), and Wye from Olantigh had never left her studio.

The Imperial War Museum lent six of her wartime paintings, including Milking Practice with Artificial Udders and The Queue at the Fish Shop. As I've mentioned elsewhere, I believe she took advantage of having this last painting back in her own hands to add a tiny detail: the medal ribbon of the General Service Star on the left breast of the cycling RAF officer (actually, of course, Roger), which he could not have been awarded at the time the painting was delivered to the War Artists Advisory Committee.

The Education Department of Cambridgeshire County Council lent the iconic Joseph's Dreams. Mary Landale, her friend and former pupil at the Ruskin School, lent Dorset and The Poet Surprised by Autumn, an early version of what was to become Autumn and the Poet. Most fascinating for anyone, like myself, wanting to account for as much as Evelyn's work as possible, a Mr L.F.Herbert lent one, possibly two, of the trilogy of allegorical paintings featuring episodes in the that Genesis story of Joseph to which Evelyn attached such importance. Joseph's Dreams is the first of the three, followed by Joseph in the Pit and Joseph in Prison. The location of these last two is unknown.

I went to Evelyn's exhibition (I was 11) and have a very faint recollection of these last two, and of others in the Abraham-Isaac-Jacob-Joseph saga, notably A Ram Caught by his Horns in the Thicket (see Genesis, Chapter 22) and The Butler's and The Baker's Dreams. (Ibid., Chapter 40.) These recollections may easily be flawed. I suspect that the two missing Joseph paintings date from the years 1945-50, which Evelyn spent in the ambit of Oxford University. During this period, maybe as a release from the constraints of her war paintings, she turned a closer attention to allegory, represented by Oxford, Dorset, the so far lost Mercatora, the early versions of Autumn and the Poet - and these two Josephs, if they can be conveniently listed as such.

In the early 1950s Evelyn, who had a great gift for friendship, became a close friend of Eileen Skinner, a disabled journalist living in Wye and who often served as a model for the classes Evelyn used to run at The Elms. Few would have witnessed Evelyn at work in her studio more closely and for longer than Eileen Skinner, who is said by some commentators eventually to have became Evelyn's amanuensis. (I've never understood exactly what this meant: Evelyn took both pride and pleasure in her personal letters, and Roger was perfectly competent in dealing with household correspondence.) Eileen, who died in 2008, incidentally as Roger's next-door neighbour in Wye and predeceasing him by 5 months, recorded that Evelyn liked to paint repeatedly a subject that particularly appealed to her, especially her Joseph series.

I can endorse this to some extent. Long after Joseph's Dreams was sold to Cambridgeshire Education Authority in 1948, another version, whether earlier or later I don't know, used to hang above the dining-room door at The Elms. In the very sparse documentation of Evelyn's life and work there is sometimes a chance mention of a second version of a known painting (Dorset, for instance). Although plural versions may also turn out to be oil sketches, they further increase the number of Evelyn's paintings that are lost or unaccounted for, as well as befogging my recollections of what I did or didn't see all that time ago. 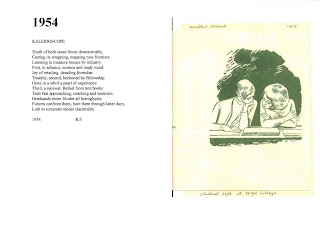 I don't know whether this refers to something specific, some student relationship of which Evelyn and Roger were aware. Evelyn's drawing (she has added 'Student Life at Wye College' beneath) shows the narrowest of spaces between the two unidentified Wye College students. If some art can be defined by the space it occupies, the importance of the middle ground between the boy and the girl becomes evident. Any wider, and the implied closeness would be lost: any narrower, and their shoulders would be touching, and the point of Roger's very clever interior rhymes would be lost:

There was no Christmas card for 1955.