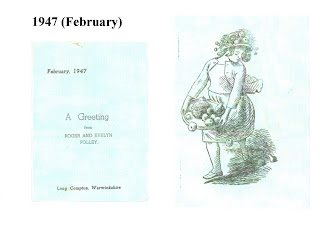 Evelyn Dunbar Christmas Card 1947 (February) Pre-publication presentation
(?) 1955 © Estate of Evelyn Dunbar: private collection
(This and the following illustrations should enlarge if clicked on)

This was Evelyn's and her husband Roger's 'Christmas' card for 1946. For some reason, maybe connected with a delay at the printer's, it wasn't sent out until the February following, several weeks into 1947. Unusually, there is no verse from Roger.

Evelyn's entirely characteristic drawing of a young woman carrying a tray of such abundant fruit that some has spilled on to the ground is entirely in keeping with her beliefs about the Covenant, the contract between nature and mankind. The earth will be endlessly productive and generous, provided mankind looks after it properly, with skill, devotion and intelligence. At the time, Roger was working in the Oxford University Economic Research Institute, concentrating on agriculture.

The figure's hat, decorated with apples, pears and cherries, is a complete delight. 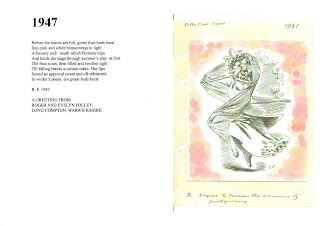 Before the leaves are full, green fruit buds burst
Into pink and white blossomings to light
A flowery arch 'neath which Pomona trips
And holds the stage through summer's play: at first
The fruit is set, then filled and swollen tight
Till falling leaves a curtain make. Our lips
Sound an approval sweet and oft-rehearsed
In winter's poesy, ere green buds burst.

At the foot of her drawing Evelyn has added, in her own handwriting, 'R. [i.e.Roger] begins to pursue the economics of fruitgrowing.'

Again, a most endearing hat, and a blossom-hemmed cloak to whirl round the dancing figure, whose swish and swoosh you can almost hear. Presumably she's Pomona, tripping on the light fantastic toe and holding the stage through summer's play, as in Roger's complementary poem. I can just remember the endless heavy snows of the winter of 1947: I wonder how many of Evelyn's and Roger's friends were warmed and cheered by this very original greeting? 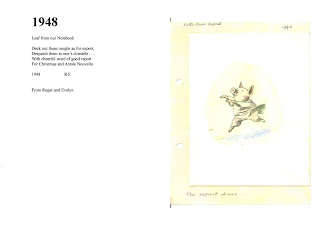 Evelyn's dancing pig, captioned in her own hand 'The export drive....', moves as gracefully, in his way, and as energetically as Pomona from the year before, although maybe he hasn't yet realised that what is being exported is bacon and sausages...

Leaf from our Notebook

Deck out these roughs as for export,
Despatch them to one's clientèle....
With cheerful word of good report
For Christmas and Année Nouvelle. 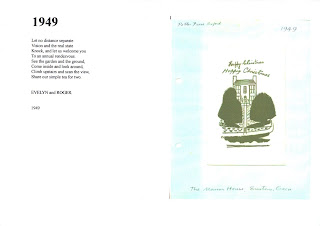 Evelyn's very simple, and I expect last-minute, drawing shows - as she writes beneath - The Manor House at Enstone. Enstone was the Oxfordshire village to which Roger and Evelyn moved in March or April 1947, in order to be nearer Oxford, where they both worked, than their previous cottage in Long Compton, in Warwickshire.

Here Roger had an upstairs study in which Evelyn painted her second portrait of him, now known, in line with Roger's 2005 request, as The Cerebrant. Evelyn had much better studio facilities than at Long Compton, and Oxford, Summer Eights and the first studies for Autumn and the Poet were painted here. I remember clambering about on the wall at the front of the property until told to stop.

Let no distance separate
Vision and the real state
Knock, and let us welcome you
To an annual rendez-vous.
See the garden and the ground,
Come inside and look around,
Climb upstairs and scan the view,
Share our simple tea for two. 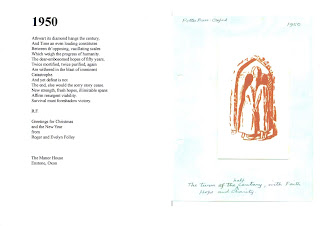 If Evelyn's and Roger's Christmas cards can be taken as a compressed joint biography, it's clear that in 1950 things changed radically for them. Evelyn's unusual - and very beautiful - drawing of the three Christian Graces, Faith, Hope and Charity, stand motionless in a space like the sort of carved niche in cathedral walls you often find weather-eroded statues of saints in. Faith and Charity are holding hands for mutual support. There's no movement, unlike the dancing pigs and Pomonas from the previous years. Faith and Charity are facing inwards, staring upwards, maybe questioningly, at the slightly taller figure of Hope, the only one of the three to look towards the viewer, and with a compelling irony Evelyn has drawn her without eyes to see, or indeed a face at all.

Underneath Evelyn has written 'The turn of the half century, with Faith, Hope and Charity'.

(Faith, Hope and Charity are personifications of three abstract qualities which St Paul wrote about in the New Testament, in his 1st Letter to the Corinthians, chapter 13. 'Charity' has always given Bible translators problems, because there's no word in English to carry the full meaning of St Paul's original Greek word αγαπη, agapé, which means human love without necessarily any sexual element, the love of a mother for her child, the love one has for one's friends, and, especially in Evelyn's case, the love a creator can have for his or her creation. 'Platonic love' doesn't fully express St Paul's meaning either: it's wider and deeper than that. The King James Bible gives 'charity', more modern versions fall back on 'love'.)
It's as though these three women and what they stand for have been reduced to nothing, with only themselves to fall back on, as though they were saying to each other 'Was it for this that we worked so hard, that we suffered, and gave so much of ourselves?' Maybe Evelyn is calling to mind the sweat and sacrifice of so many of her war paintings, wondering whether it was all worth it, not in terms of the place of women in post-war Britain, but in the much wider world.

But at least Hope is there. Roger's sub-Tennysonian poem reads:

Athwart its diamond hangs the century,
And Time an even loading constitutes
Between th' opposing, vacillating scales
Which weigh the progress of humanity.
The dear-enbosomed hopes of fifty years,
Twice mortified, twice purified, again
Are withered in the blast of imminent
Catastrophe.
And yet defeat is not
The end, else would the sorry story cease.
New strength, fresh hopes, illimitable spans
Affirm resurgent viability.
Survival must foreshadow victory.

What 'imminent catastrophe' is this? A backward glance shows that towards the end of 1950 things really did look very black indeed. The Korean War is almost forgotten now, but in the late autumn and early winter of 1950 it seemed to US President Truman that the most expedient way to protect and preserve the pro-democratic, anti-communist government and people of South Korea from the invading Chinese communist forces, supported morally by Stalin's Russia, was to arrest their progress with atomic weapons, known at the time, with an apprehensive shiver, as the A-bomb, and a little later as the H-bomb. In other words, to unleash another Hiroshima. The Western world was horrified. This is the bewildered discouragement Evelyn's figures express.

(In fact the A-bomb was never used, and the war dragged on until an armistice was signed in 1953.)

In their personal lives much was about to change. In 1949 Wye College, the mid-Kent Horticultural Economics Department campus of Imperial College, London, advertised for an economist. Roger was appointed. He takes up the story:

Careerwise it was too good an opportunity to miss: for Evelyn it meant sacrifice, severance of her ties with the Ruskin and her friends there. I was to start at the beginning of the academic year 1950-51. Wye had many attractions. The College had international status and would give me a chance to make horticultural economics a recognised discipline. We would live on the spot and, being so much nearer, might expect the occasional visit of Evelyn's family. There had been no contact since we left in 1946. [Actually 1945] Evelyn accepted the sacrifice and was hauled off to a third new beginning.¹

Roger took up his appointment in September 1950. No house was immediately available, so for some weeks he commuted between Enstone, where Evelyn remained, and Wye, staying in hotels during the working week. This unsettled existence explains why the address on their 1950 Christmas card is still The Manor House, Enstone. A few weeks before Evelyn's 44th birthday in December, 1950, and after spending a final homeless week in which they 'lived from the car, retiring at night to one of four woodland clearing sites in rotation',² they took over the lease of The Elms, a large late Victorian house built in 1884, standing on its own on a ridge about 3 miles south-west of Wye.

I suspect there's some expression of personal feeling in Evelyn's drawing. She had loved Oxford, and the opportunities it had offered to develop her painting. All that was finished, although she continued to teach at the Ruskin as an occasional visitor. She may have taken some pride in Roger's rise in his professional field and the realisation of the role she saw him occupying as a sort of latter-day Biblical Joseph, agent of the Covenant. She may have well have entered the menopause just at the time when the promise of more settled circumstances might otherwise have led her to consider starting a family, despite having suffered a miscarriage at some unspecified time before. According to Roger, who was mostly silent about it, this miscarriage was caused by Evelyn's then habit of doing handstands against the wall, something which wouldn't have been in the least improbable for this very remarkable woman.

Despite these unpromising beginnings to the fourth and final part of her career, Evelyn came to love The Elms and Wye College. Their 1951 Christmas card, to be seen in due course, is much more positive.

EVELYN DUNBAR : A LIFE IN PAINTING by Christopher Campbell-Howes
is available to order online from
http://www.casematepublishing.co.uk/index.php/evelyn-dunbar-10523.html
448 pages, 300 illustrations. £25
Posted by Christopher at 14:29:00