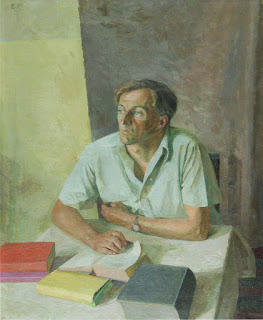 Evelyn completed this very fine second portrait of her husband, Roger Folley, in the late summer of 1948. She may have felt that the first rather liverish portrait she painted of him two years earlier did not show him to his best advantage.

At the time Roger, then 35, was working with the Oxford University Economics Research Institute, travelling into Oxford daily from their home at The Manor House, Enstone. Roger had made himself a study on the top floor of The Manor House, and it is here that Evelyn captured him in a characteristic pose: as Roger said to Evelyn's biographer Gill Clarke, 'It's a celebration of Thinking (as distinct from Doing - with reason)'.

Family legend has it, however, that what Roger was actually doing was sitting very still watching birds in the trees outside. It took Evelyn three afternoons to complete the main features, including Roger's bronzed face and arms. It had to be done in the afternoon because that was the time at which the summer sun streamed into Roger's study, making this painting as light and airy as its predecessor had been sombre.

The rest she finished at her leisure in time for the portrait to be presented, probably at Easter 1949, to Roger's father, E.W. Folley (1872-1968), a retired headmaster in the Lancashire town of Colne. Folley senior's parents had christened him Ebenezer William, Ebenezer being a name of some consequence in the unbending Methodist circles in which they moved. (Through some miracle of linguistic compression the original Old Testament Hebrew means 'hitherto the Lord hath helped us'.) For all that, he was known in and around Colne as 'Ebby' or 'Uncle Eb', and latterly, having devoted his later life to the promotion of music, literature and cricket in his native town, as 'Mr Colne'.

In 1948 he completed, for private publication the following February, a book called Romantic Wycoller, a history of a tiny community hidden in the folds of the North Lancashire Pennines, in which he tried to equate the Ferndean Manor of Charlotte Brontë's Jane Eyre with the ruined Wycoller Hall.¹

Wycoller Hall was once owned by a family of local magnates called Cunliffe. At 'Ebby' Folley's request, Evelyn made her only known foray into heraldry in her reproduction of the Cunliffe arms for her father-in-law's book, which I include for the sake of completeness and a certain Evelynish complicity in the owlishness of the owls and the joyous abandon of the rabbits - or, more strictly, coneys. (Coney = Coneyliffe = Cunliffe: in the argot of heraldry I believe this is called canting. And maybe Henry Cunliffe's wife's maiden name was really Owldham.) 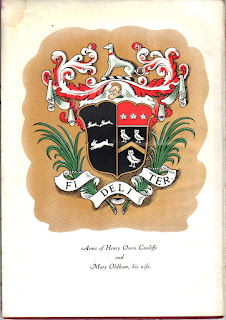 In September 1948 Sarah Jane Folley, Roger's mother, died. (Romantic Wycoller is dedicated In Memoriam S.J.F.) As an act of family unity following her death Evelyn designated her portrait of Roger as a gift to her father-in-law the following year. E.W.Folley kept it in what he called his front parlour, as a photo taken several years later shows: 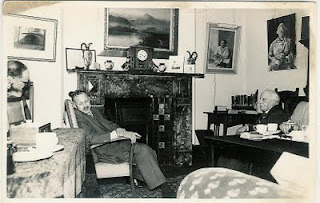 E.W.Folley (extreme right), Evelyn's father-in-law, with friends. Evelyn's portrait of Roger Folley upper centre right. (Author's photograph)
It's possible that Evelyn took the opportunity of this visit to Colne to make the pencil sketch of E.W.Folley below: 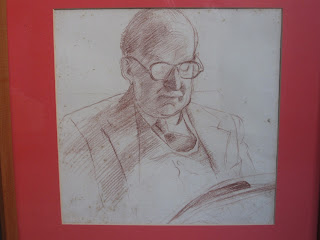 When 'Ebby' Folley died in 1968, Roger retrieved the portrait Evelyn had painted of him 20 years before. By that time Evelyn had been dead for 8 years. Roger kept it until 2005, when he felt the time had come to dispose of the few remaining paintings and drawings by Evelyn still in his possession. When Roger asked me to choose something by which to remember Evelyn, I asked him for this portrait, because I had long admired it, its creator and its subject. Alas! He had other ideas, of a wider generosity.

He wrote to me on February 28th, 2005 as follows (his sight was very poor: his typescript is reproduced exactly):

Full marks for art aooreciation.....and regret at denying you yout choice. I consider the 'pensive' portrait such a gem - I know nothing like it that everyone should share it, so I am aiming to hand it over to any appreciative Gallery. I do not doubt you will concur in this (greatest good...Approach.

Perhaps remembering his native county, Roger's chosen 'appreciative Gallery' was Manchester Art Gallery, where it still is. (There had also been some talk of an Evelyn Dunbar retrospective exhibition in Manchester in 2006, to celebrate her centenary, but this came to nothing.) It was delivered to the Manchester Art Gallery on 31st August, 2005. It had still not been acknowledged by the 20th November following.

On making this gift to the Manchester Art Gallery, Roger asked that henceforth the portrait should be entitled The Cerebrant, i.e. one who is thinking. I'm not certain that it has ever been displayed, but would be glad to be corrected.