Potato Sorting, Berwick, is the third Women's Land Army painting Evelyn completed during her stay in Berwickshire, in southern Scotland, in the spring of 1943. At the time her husband Roger Folley was completing night-fighter navigation training at RAF Charterhall, between the villages of Greenlaw and Duns. This final training course would qualify him for active service posting the following July to 488 (NZ) Squadron, a night-fighter unit mostly staffed by New Zealand volunteers but with several British members and at least one Dutchman.

RAF Charterhall closed in 1946, and is now a desolation of ruined huts and unmanaged pinewoods set among the broad upland fields of Berwickshire, one of which is the setting for Potato Sorting, Berwick. Unusually, Evelyn unfolds her narrative from right to left.

It's a bleak scene, at some remove from the sunny and idealised recruiting poster below: 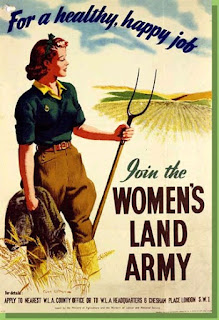 In looking at Potato Sorting, Berwick it doesn't need much of a stretch of the imagination to feel a keen April east wind blowing in from the North Sea: all the Land Girls except one are wearing headscarves and coats, mostly uniform greatcoats. The Land Girl in the centre, however, has found her work warm enough to discard her greatcoat, and nobody is wearing gloves, so it can't be that cold.

If we could hear what is being said, we would probably be struck by the muddle of accents, frequent requests to repeat what has been said, probably some mimicry, especially back at the Women's Land Army hostel after work has finished for the day. The two men on the left will presumably speak with the local Borders accent, in their dialect calling potatoes 'tatties', while the Land Girls, who will have come from all over the United Kingdom, will have their own manner of speech in which 'taters', 'spuds', 'teddies', 'murphies' and of course the English middle-class 'potatoes' all mean the same thing. Maybe we can imply from Evelyn's painting the unity-within-diversity that was such a feature of wartime propaganda films.

And then there's the noise of the machine. Some surviving Land Army accounts of potato sorting describe the stultifyingly boring process of picking through potatoes and sizing them by hand: this farm is lucky enough to have a machine to help things along. All the same, it's not very different in principle from the drawing below, dating from about 1908: 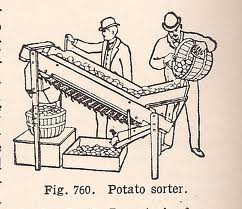 - but it shows some advance. The machine, which appears to be fairly new from the pristine-ish state of its paintwork, is operated by a crank turned by the second Land Girl in from the left, the counterpart of the bowler-hatted and nattily-dressed gent on the left above.

On the extreme right, Land Girls are shovelling main crop potatoes from the clamp they've been stored in since harvest the previous autumn, using tools called graips, forks with more tines than usual and with each tine flattened at the end to prevent damage to the potatoes.

The potatoes run along a riddle which sorts them into sizes, then up a short open elevator, from which damaged or diseased potatoes can be picked by hand. The crop appears to be an especially good one: the relaxed, leaning, cross-legged pose of the left-hand Land Girls - suggests that there isn't much weeding out of below-standard potatoes to be done. The sorted potatoes arrive at the top of the elevator and fall into a sack held by a farm labourer. When full, the sack will be weighed on the scales on the extreme left and the contents adjusted until exactly 1 hundredweight (45kg) is reached. Older readers will remember that 20 hundredweight (cwt) made 1 ton. By the end of the day several tons of potatoes will have been sacked up, especially if the not inconsiderable spillage is included.

Sub-standard or damaged potatoes, incidentally, were stained with purple dye, marking them as unfit for human consumption, and were used as animal feed, chiefly for pigs.

Potato Sorting, Berwick and its companion pieces Land Army Girls going to Bed and Women's Land Army Hostel were exhibited - with other paintings - at the National Gallery in London later in 1943. The critic Jan Gordon, writing in that year's November issue of The Studio, commented:

The pictures are capable and in many ways excellent, but as the collection grows, a conviction becomes equally strong that something is lacking from them, and that lack seems to be a lack of war consciousness...Evelyn Dunbar's set of four [but which was the fourth?] 'Land Army' paintings are works of a very respectable talent indeed, but good as they are they are examples of what I mean when I suggest a lack of war-substance.

I don't think these three paintings are among Evelyn's best, although it's still possible to pick up from them, as in all her War Artists Advisory Committee work, her themes of determination and hope. I think they are revealing of something else, of preoccupations not always connected with her work. She was under pressure: in letters from this period to the Secretary of the War Artists Advisory Committee she asked for more time, for the final date of her contract to be extended. The WAAC was very accommodating and gave her all the leeway she wanted, but it seems clear that her 1943 output had reduced considerably compared with the non-stop outpourings of 1940-42. There's no proof, of course, as so much of her work is unaccounted for, but if the first six months of 1943 accounts only for these three paintings plus the work she produced during her stay in Usk, i.e. six mostly small paintings in total, then a change has come over Evelyn. Few of the early 1943 paintings are highly finished, in the way that Women's Land Army Dairy Training or St Thomas's Hospital in Evacuation Quarters are. What has happened?

Firstly, her private painting was occupying her more, maybe at the expense of her WAAC commissioned work. In 1943 she exhibited, possibly among other non-war paintings, the talismanic Joseph's Dream, at last now complete and highly finished.

Secondly, Evelyn had had on her easel since before her marriage in August 1942 one of her largest wartime canvases, The Queue at the Fish Shop. Although this painting wasn't submitted until 1945, I would like to take it next in the canon, because I think it's a celebration of her marriage and a strong statement of what Roger Folley had become for her. Completion may well have eclipsed, for the moment, her interest in the Women's Land Army. Here's a foretaste of what is one of her greatest paintings:

Thirdly, marriage, as it was bound to, altered Evelyn's outlook in many ways. Despite wartime marriages being fraught, it worked. They were as suited to each other as the two Georgian brass candlesticks which my mother gave her brother Roger and Evelyn as a wedding present, and which I now have in my study as I write this. At the most basic level, from now on she could rely on Roger's service pay, particularly as they had no married home: after marriage Evelyn continued to have her home and studio in Rochester, at The Cedars, although she followed Roger's various postings wherever she could. Having nowhere else, Roger considered The Cedars as his home too, but he was only able to spend odd leaves there.

Up until 1943 Roger had seen no active service in the air. Completion of his flying training, which started in 1941, at RAF Charterhall would mean active service to follow. Life expectancy among RAF aircrew was not high. However inured RAF personnel were to tragedy at this stage in the war, a cloud hung over RAF Charterhall to which both Roger and Evelyn would have been sensitive: shortly before Roger arrived in Berwickshire, Flight Lieutenant Richard Hillary was killed on a training flight from RAF Charterhall, when his aircraft crashed into a nearby field. Hillary had been a celebrated and successful Battle of Britain pilot who had suffered appalling burns when his Spitfire caught fire. He recounted his Battle of Britain experiences in a then famous book, The Last Enemy. After intensive treatment at the famous East Grinstead, Sussex, burns hospital under Sir Archibald McIndoe, Hillary insisted on returning to flying, meeting the last enemy while re-training.

Roger joined 488 (NZ) Squadron, then based in Ayr, Scotland, in July 1943. The first mention of him in Leslie Hunt's Defence until Dawn: The Story of 488 N.Z. Squadron, reads '...by this time [July 1943] Roger Folley had turned up ahead of his pilot, Flight Lieutenant Ron Watts, of Auckland; Roger hailed from Rochester, Kent, and was a professor in days of peace.'

('Professor' was prophetic: only after the war did he become a university lecturer.)

I think Evelyn was terrified of losing him. With final training at a RAF station haunted by the spectre of the iconic Richard Hillary and with active service looming, she wanted to spend every possible moment with him. It's surprising that her commissioned painting didn't suffer more.

EVELYN DUNBAR : A LIFE IN PAINTING by Christopher Campbell-Howes
is available to order online from
http://www.casematepublishing.co.uk/index.php/evelyn-dunbar-10523.html
448 pages, 300 illustrations. £25
Posted by Christopher at 18:53:00