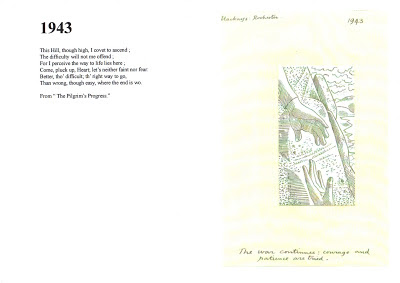 The second of Evelyn's and Roger's Christmas cards shows two hands, one reaching down and the other reaching up, on a rock climb in Yorkshire. This is Almscliffe Crag, not far from Harrogate, and a pitch well-known to rock climbers called The Flake. Roger knew it well from his student days, 1932-36, at Leeds University, and had introduced Evelyn to it at some time during his RAF leaves. I can imagine that he found in rock climbing not only a freedom and release from the mortal pressure and claustrophobia of constant sorties as a navigator with 488 (N.Z.) Squadron, but also a deep delight in discovering that Evelyn could share his passion for rock climbing as well.

Roger chose the text, an extract from The Pilgim's Progress:

This Hill, though high, I covet to ascend;
The difficulty will not offend;
For I perceive the way to life lies here;
Come, pluck up, Heart; let's neither faint nor fear:
Better, tho' difficult; th' right way to go,
Than wrong, though easy, where the end is wo.

(In this section of The Pilgrim's Progress, the hero Christian arrives at the foot of a hill called Difficulty. At the foot of the hill his two companions, Formalist and Hypocrisy, duck out of climbing the steep path up the hill and take the easy paths left and right round the foot, not knowing that one path leads to Danger and the other to Destruction. Christian is later described as changing 'from running to going [i.e. walking], and from going to clambering on his hands and knees, because of the steepness of the place'. So Roger's quotation and Evelyn's drawing are particularly apt.)

There are several paths to follow from all this, not necessarily leading to Danger and Destruction, but maybe not to anywhere else in particular either. Certainly, the two hands suggest mutual assistance, support and encouragement in difficult times between husband and wife, but I think Evelyn's later comment, in her own handwriting, 'The War continues: courage and patience are tried' reaches outwards to the wider world.

By Christmas 1943 the presence of American troops in Britain, in preparation for the Normandy landings the following year, was universally felt. 'Hands across the sea' wasn't only the name of an 1899 Sousa military march given radio airing occasionally alongside Bing Crosby's I'm dreaming of a white Christmas or Glenn Miller's Moonlight Serenade or the Mills Brothers' Paper Doll on the popular American Forces Network: it was a metaphor for the assistance, support and encouragement given by the USA to the British and other allied forces. (It was borrowed for the title of a 1980s TV series about the relations, not always trouble-free, between US troops stationed in England and the natives.)

So much for any allusions in Evelyn's drawing, historical now but very present then. And the sharp-eyed will notice - the drawing should enlarge if you click on it - that wittingly or unwittingly she has been unable to escape, in the lower right-hand side where far below a river flows, a suggestion of fields neatly enclosed by drystone walls. Agriculture is never far away.