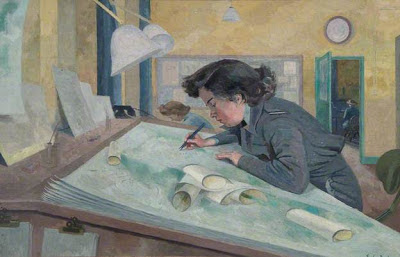 There's such a palpable change evident in this quite haunting and beautifully light and balanced painting, compared with Evelyn's two previous Women's Auxiliary Air Force studies (Women's Auxiliary Air Force Store and Portrait of an Air Woman), that I think it's legitimate to suggest that something positive happened in Evelyn's private life to account for it. At the time, the second half of 1944, she was also working on two major canvases, both with Women's Land Army subjects: A 1944 Pastoral: Land Girls Pruning at East Malling and A Land Girl and the Bail Bull, two of her most finished wartime canvases.

While Evelyn was working on the WAAF commission from her employers, the War Artists Advisory Committee, her husband Roger Folley was serving with 488 (N.Z.) Squadron. This squadron flew De Havilland Mosquito night-fighters. Roger's year-long training was not only in navigation but in in-flight radar operation as well. Mosquitoes had 2-man crews, pilot and navigator. Roger's pilot was Squadron Leader Ron Watts, a New Zealander who was eventually promoted to Wing Commander and took command of the squadron.

The Watts/Folley team flew 116 night-fighting sorties from various RAF stations, among them RAF Colerne in Wiltshire. It was at RAF South Cerney, conveniently near Colerne, that Evelyn completed her preliminary sketches for Women's Auxiliary Air Force Store and Portrait of an Air Woman.

In October 1944 Roger and his squadron were transferred to Amiens, in northern France, in the wake of the advancing Allies, and in the spring of 1945 to Gilze Rijen in Holland, where the squadron was disbanded a few days before the war ended. Roger had served continually since July, 1943. During these six months Evelyn and Roger saw very little of each other. Unable to follow him abroad, Evelyn lived at home at The Cedars in Rochester and looked for subjects nearby.

The preliminary sketches for Section Officer Austen, Women's Auxiliary Air Force Meteorologist were made at RAF Gravesend, almost within walking distance of Strood, the trans-Medway area of Rochester in which Evelyn lived. What was once RAF Gravesend is now a housing estate and leisure centre, so nothing remains of the wooden huts or brick offices, hastily built in the great UK airfield expansion of 1938-39, which once housed the meteorological department where Section Officer Austen worked.

Section Officer Austen, who looks about 25, is a study in concentration as she leans forward over a large map. We can't tell what the map is of, but it's likely to be of the Western Approaches, maybe stretching as far south as the Azores, so often the origin of the weather systems which would affect aircraft movement in support of advancing Allied troops in northern France and the Low Countries. The rolls of paper around her suggest tracings, maybe reports from weather patrols far out in the Atlantic, which Austen is adding to the overall weather map. At last Evelyn, or the censoring authorities through whom she worked, is allowing us to see a member of the Women's Auxiliary Air Force actually engaged on work of tactical importance. We know nothing about her other than her surname. If she is still alive she will be in her 90s.

A blonde colleague, equally concentrated, is sitting beyond Austen, within reach of a telephone typical of the 40s (then - and maybe still - popularly known as 'the blower'), and another, with a hairdo so splendid that it might be mistaken for a hat, is sitting in an office through the doorway.

Roger Folley, who died in 2008, was a quiet and unassuming man, not alone among ex-RAF aircrew in being almost pathologically reticent about his wartime experiences. However, in an uncharacteristic opening-up that was never repeated, he did once show me a home-made decoration his squadron colleagues had given him. I must have been about 13 at the time. I asked him, crudely, how many German planes he'd shot down. As so often in matters he  didn't want to talk about he ducked the question (in fact the answer was 1). It wasn't really for that, he said. The 'decoration', a plywood cross painted black and white like the wing markings of Luftwaffe aircraft, was attached to a large collar of crêpe paper and was inscribed 'Fritz Frier Folley', 'Fritz' being a generic term for Germans. His colleagues had presented it to him in recognition of the various tweakings and improvements he'd made to their in-flight radar sets, making identification of targets easier and more accurate.

Roger's contribution is recognised in a rather end-of-term-reportish understatement in Leslie Hunt's book Defence Until Dawn: The Story of 488 N.Z. Squadron, published privately in 1949: 'Roger had gone about his duties quietly but with a great sense of humour and as the Nav/Radio Leader had done some sterling work for the squadron.' In fact, as a result of his radar improvement work he was seconded to other RAF units, under a scheme called Navigator Lease, to train other navigators in its use.

It's no more than conjecture: something positive and reassuring had happened to Evelyn at the time Section Officer Austen was painted. I wonder if that something was her relief on hearing that Roger had been taken off flying duties?

Thanks to Graham Corner for help in the preparation of this commentary.

EVELYN DUNBAR : A LIFE IN PAINTING by Christopher Campbell-Howes
is available to order online from
http://www.casematepublishing.co.uk/index.php/evelyn-dunbar-10523.html
448 pages, 300 illustrations. £25
Posted by Christopher at 17:53:00