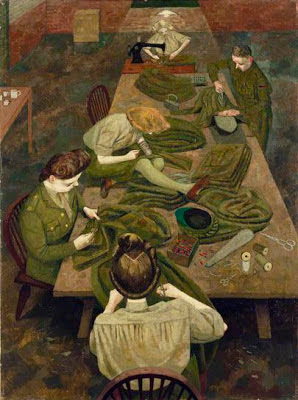 Maybe as a result of a continual flow of Women's Land Army paintings, and of pundits downward from Sir Kenneth Clark, Director of the National Gallery and Chairman of the War Artists Advisory Committee, remarking on their apparent lack of war content, it was suggested to Evelyn that she should record the activities of the various women's branches of the armed services.

This rather unusual painting has a question mark over it because I can't accurately assign a chronology to it. There appears to be no account of Evelyn visiting an army depot to record the scene above. I have a problem with the title, too: certainly there's an army tailor at the upper right of Evelyn's painting, but there are four ATS women in it, so maybe the title should be An Army Tailor and ATS Tailoresses, a title echoing in its categorisation of the sexes her earlier painting Men Stooking and Girls Learning to Stook. At any rate, that's how I should like to refer to it hereafter. With some reserve: there never was a designated army tailoring service. The manufacture and supply of uniforms was put out to civilian contract. The people in Evelyn's painting are doing individual alterations and sewing on badges.

ATS, for the record, stands for Auxiliary Territorial Service, the women's branch of the army. The ATS was founded a few days after the outbreak of war in September, 1939, and volunteers served as clerks, orderlies and telephonists among other fairly lowly occupations. In December 1941 unmarried women between 20 and 30 were conscripted into the various women's services, including the chief subject of Evelyn's brush, the Women's Land Army. For some reason the ATS was the least popular of the women's services, acceptance into the somewhat exclusive Women's Royal Naval Service being the most sought after, closely followed by the Women's Auxiliary Air Force. Despite expanding its scope to include more prestigious paramilitary activities like radar operation, decyphering and encrypting codes, gunlaying and ammunition inspection, the ATS remained the Cinderella of the women's services. However ATS members (known popularly as 'Ats', like 'Wrens' and 'Waafs') felt their image had received a welcome and necessary boost when in February 1945, and apparently of her own free will, the 18-year-old heir to the throne Princess Elizabeth (now Queen Elizabeth II) volunteered to serve in its ranks as a driver.

An Army Tailor and ATS Tailoresses shares with several other contemporary mid-wartime paintings, for example Land Army Girls going to Bed and Women's Auxiliary Air Force Store, a top-down viewpoint that makes me wonder if one of Evelyn's first requests on arriving at a venue was the loan of a stepladder.

The high viewpoint, while creating problems of foreshortening, does give us a panoramic view of what's going on, if panorama is the right word to describe five people variously arranged round a long table. It's clearly a warm room, probably in the depot stores: three of the women have taken off their tunics. We can't see exactly what the woman in the foreground is doing, but we can imagine that she's sewing on red arm strips. There's a box of such strips in the lower foreground. Beside the box are the tools of their trade: reels of white or khaki cotton, scissors, a steel sleeve slide, to prevent accidents like the inadvertent sewing of both sides of a sleeve together.

It's possible that the two women in the foreground are working on the same garment, a winter greatcoat. The left-hand woman appears to be sewing an embroidered crown on to one of the shoulders, indicating that the coat belongs to a major. It may be the major's cap that's seen upside-down in the right foreground, awaiting the addition of a corps or regimental cap badge. The addition of one or more red strips to his sleeve would show firstly that he belonged to an infantry regiment and secondly to which brigade his regiment had been assigned. Tentative and conjectural though this suggestion is, it would tally both with the organisational changes in the British army that followed the series of defeats in the earlier years of the war, and with preparations for the Normandy landings. Dating this painting to September or October, 1943, can't be far out.

The second woman on the left is sitting on the table in the traditional cross-legged pose of tailors, or as cross-legged as skirt-worn modesty allows. Unlike her colleagues, she has abandoned her services issue stickback chair. The underside of the seat would have a crown, or possibly the letters WD (War Department) branded into it: the rear edge of the seat would have had GVIR die-stamped on it, i.e. Georgius VI (6) Rex, to mark it as Ministry of Defence property. (Thousands of these chairs were issued. I owned four of them once, bought at an auction of ex-MOD furniture. They served as our family dining chairs for many years.)

At the far end of the table another ATS is operating a sewing machine. Completed battledress tunics, trousers and greatcoats cover the rest of the table, and the nearer floor spaces show that scissors have been well used.

On the right is the tailor of the title, a simple private, no Goliath, no warrior by all appearances. He's ironing something on a sleeve board, warming his flat-iron on a little trivet probably heated by short stubby candles like night-lights. When I contemplate this diminutive figure, I begin to wonder if Evelyn, maybe not entirely enamoured of this commission and wishing she was out of doors, isn't making an elaborate and sophisticated joke. She would be perfectly capable of it. So, how many people do you see in the picture?

While Evelyn was no feminist, as we understand the term today, she was proud of her sex and proud too of the very small, as she saw it, contribution she had made in the cause of the emancipation of women. She was too modest to give much value to her own personal contribution, but her wartime work in no way detracted from a general re-evaluation of the place of women in a largely male-dominated society. Exploring the social consequences of war, especially World War 2, was practically an academic cottage industry in the 1970s and 80s. One of the ideas suggested, one particularly associated with the now rather old-fashioned sociologist Stanislav Andreski and rather grandly entitled Military Participation Ratio, was that the more any section of society (e.g. women, blacks, scientists) contributes to a war, the greater the levelling of social inequality in that section's favour afterwards. I'd like to explore this idea further in the context of Evelyn's last, and greatest, Women's Land Army painting, A Land Girl and the Bail Bull, in due course.

It would be crass to suggest that the notion 2 women = 1 man ever fell from Evelyn's lips, but I wonder if in sketching An Army Tailor and ATS Tailoresses from the top of her stepladder the fleeting thought crossed her mind that if each woman represented two men, and if you added in the army tailor, you would endorse the old saying that 'nine tailors make a man'. She would certainly have enjoyed the story of Queen Elizabeth I welcoming a deputation of 18 tailors by saying 'Good morning, gentlemen both'.

There are two other features I'd like to single out. The first is the hairdressing, and the contrast between the elegantly-coiffed ATS and some of the nondescript hair-dos of Evelyn's Land Girls. Perfectly natural: the Women's Land Army worked long hours out of doors in all weathers, while these ATS are sedentary, their perms not subject to sudden downpours or sweat-soaked, chaff-ridden scalps. But then the WLA had no ranks, all were theoretically equal, while the ATS had its full hierarchy of officers. Hairdressing and military discipline have often marched together.

The second is the floor, which - unexpectedly - is extraordinarily beautiful in its balance of abstract shapes and subtle colours, complementing but in no way drawing attention away from the activities round the table. I hope Evelyn enjoyed painting it.

EVELYN DUNBAR : A LIFE IN PAINTING by Christopher Campbell-Howes
is available to order online from
http://www.casematepublishing.co.uk/index.php/evelyn-dunbar-10523.html
448 pages, 300 illustrations. £25
Posted by Christopher at 11:52:00