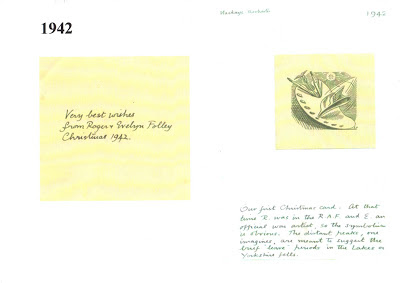 Evelyn married Roger Folley in August 1942, and the following Christmas they started what became a tradition over the next 17 years: Christmas greetings designed by Evelyn, with text written (or selected) by Roger. The 1942 card above is the only one of the series without a text from Roger. It will enlarge if you left-click on it.

In 1955 Evelyn had the notion of assembling all their previous Christmas cards into an album, possibly with a view to publication. This entailed cutting each card in half, mounting each half on card and adding a brief comment. The printer's name (in this case Mackay's of Rochester) is given, I imagine, to help an eventual publisher to locate the original blocks.

There's nothing traditionally Christmassy about any of them. Their individuality and the denseness of Roger's texts, which will become apparent as the series unfolds, became notorious in the family for their un-Christmassy-ness. Evelyn's Christian Science, however - with which Roger complied to some extent - did not celebrate Christmas as a religious festival. Evelyn's comment, in her own handwriting, reads:

Our first Christmas card. At that time R. was in the R.A.F. and E. an official war artist, so the symbolism is obvious. The distant peaks, one imagines, are meant to suggest the brief "leave" periods in the Lakes or the Yorkshire fells.


Evelyn's and Roger's short war-time honeymoon was spent in the Yorkshire fells. This, and the star Evelyn has placed on the 'distant peaks' in her cameo, might serve as the last word on the disquisition in the previous post (Baling Hay, 1943) about the infrequency of mountains in Evelyn's work. The sharp-eyed will note that, exceptionally, Evelyn has signed herself 'E.F.' (Evelyn Folley), instead of her usual 'ED', 'E.Dunbar' or 'Evelyn Dunbar'.

EVELYN DUNBAR : A LIFE IN PAINTING by Christopher Campbell-Howes
is available to order online from
http://www.casematepublishing.co.uk/index.php/evelyn-dunbar-10523.html
448 pages, 300 illustrations. £25
Posted by Christopher at 10:37:00