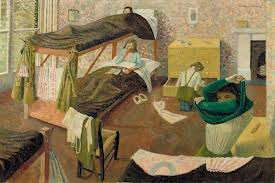 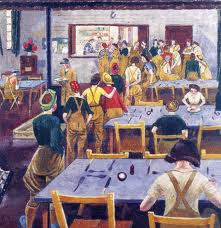 In the spring of 1943 Roger Folley, Evelyn's husband, was posted for training in night navigation and the use of in-flight radar to RAF Charterhall, in Berwickshire, Scotland. As usual Evelyn did her best to follow his postings, and for a time they lived in a rented cottage on a farm called Edington Mains, near the Borders village of Greenlaw. (The farmer's name was Clark: his son James, then a 7-year-old known as Jim, was later to win two World Formula 1 championships.)

At least three Women's Land Army paintings ensued from Evelyn's stay in the Borders. The two above, Land Army Girls going to Bed and Women's Land Army Hostel, are set in a so far unidentified hostel in Northumberland. They're unusual in that they show Land Girls off duty and not actually engaged in agricultural activities.

Before setting off for the Borders Evelyn had contacted the secretary of the Northumberland branch of the Women's Land Army, via Lady Gertrude Denman, Director of the WLA.. Evelyn was warmly welcomed, according to a letter she wrote to Elmslie Owen, secretary of the War Artists' Advisory Committee: 'She [the Northumberland secretary] was very pleased to hear that I thought of going there, some of the best work is apparently done up there, and people hear and see little of it.' It's maybe a little ironic that the paintings shown here should be of Land Girls preparing to sleep or eat, but in fact the third of the Borders trio, Potato Sorting, Berwick (subject of the next commentary) shows them engaged in uncomfortable and demanding work.

Having been given her credentials, Evelyn settled down to sketch and paint them. Who were these Land Girls?

By 1943, when Evelyn was painting these pictures, the Women's Land Army had largely overcome the strong opposition to employing Land Girls initially voiced by many farmers. Founded by Lady Denman in 1938 as war clouds gathered on the horizon, and based on a similar organisation in the 1914-18 war, the Women's Land Army gathered strength as the war progressed. There are many individual memoirs of service in the WLA, and Dr Gill Clarke, also Evelyn's biographer, has written a concise and readable account of it in her The Women's Land Army: A Portrait (Sansom & Co., Bristol, 2008).

At first the WLA was staffed by volunteers, but by December 1941 the shortage of manpower led the UK Government to conscript women. To be accepted for the WLA recruits had to be between 17 and 40, to be strong and healthy, fond of country life, not afraid of hard work, and prepared to serve for the duration of the war wherever they might be posted.

They came from all backgrounds, Wales, Scotland, Northern Ireland and England, rural and urban, and from all levels of a British society maybe more, or at least differently, class-stratified than today. Gill Clarke quotes Vita Sackville-West's (an acquaintance of Evelyn in her later years) account of the background of recuits: 'She has been a shop assistant, a manicurist, a hair-dresser, a short-hand typist, a ballet-dancer, a milliner, a mannequin, a saleswoman, an insurance clerk...'

Their first names, all taken from the many former Land Girls who have recorded their experiences, give a sense of period: there are Gwens, Sheilas, Dorothys, Margarets, Joys and Joyces, Eileens, Audreys, Clarices, Muriels, Fredas, Maureens, Gladyses, Doreens, Queenies, Irises and Graces, Veras and Hildas. This - maybe unfortunately -  isn't the place to discuss the outcomes of the social mixing the WLA gave rise to, and the affirmation by the WLA - and other organisations like the Auxiliary Territorial Service (ATS, the women's branch of the British army) and the Women's Royal Naval Service (WRNS) - of the future place of women in British society would be a digression from Evelyn's painting. Even so, some months after Evelyn's Border expedition, she was commissioned to record the activities of the Women's Auxiliary Air Force (WAAF).

The majority of Land Girls lived in hostels, mostly large houses, a few purpose-built. Evelyn has chosen a bedroom probably on the first floor - note the size of the window - of a country house for Land Army Girls going to Bed, a room spacious enough for at least 4 bunk beds. There's a girls' dormitory atmosphere about it - at least, I suppose so: I have to declare a working ignorance of girls' dormitories. As in several of her interiors it's difficult to work out exactly where Evelyn has placed herself to record this scene and make it into a viable and striking composition.

Many viewers will have problems with the perspective, and as many will say that it's mere cavilling to observe that the lower of the left-hand bunks doesn't match the one above it; and the joint between the foot and the side rail is conveniently obscured by what some might call a chairdrobe, hung with a pair of shoulder-strapped regulation khaki dungarees and a camisole.

Never mind, there are other unsuspected accuracies. These hostels were very strictly run, with a curfew requiring Land Girls to be indoors by 10pm. Presumably, then, this scene must be taking place after curfew, say 10.30-11.00pm. But it's still light: how can this be, even allowing for the fact that the further north you go in the summer months, the shorter the nights become? In order to tally with what we know of Evelyn's movements in the Borders, the month is probably May, 1943. Suddenly the light dawns: throughout the war years Double British Summer Time was in operation, and the time by the clock is two hours in advance of Greenwich Mean Time. What is 8.30pm by the sun is 10.30pm by Big Ben and the hostel clock.

No one has drawn the curtains, so presumably the bedroom isn't overlooked. Corner posts are hung with greatcoats, maybe a reminder that summer hasn't entirely arrived and that on the East Coast the wind coming in off the sea can be cruel, even in spring. Draw-string bags slung from the bed posts presumably hold shoes. The girl in the lower bunk is applying cold cream to her face, a common practice at the time, before settling down.

The exact centre of the painting is occupied by a pair of fleece-lined slippers, and this is curious: Evelyn herself often wore slippers just of this type. They re-appear (surely not the same pair?) at the very end of her life, in a portrait she painted of my half-brother Richard, who remembers Evelyn lending them to him. (This portrait was among the many paintings stacked in her studio at her death. It was labelled, prosaically, Boy Reading by Roger Folley. In due course it was given to the subject.) 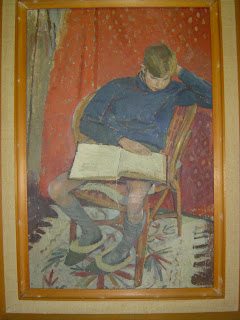 I'm not of course suggesting that it's deliberate, but bedroom slippers also lead us, with Evelyn's usual left-to-right directionality, into Women's Land Army Hostel. Worn by the Land Girl at the end of the canteen queue, they're bright blue, and this little painting, only 9" by 9", is possibly the most colourful of all Evelyn's WAAC paintings. She evokes a most lively sense of cheerfulness and camaraderie. The Land Girls, queueing for their evening meal, are not long off duty: few, if any, have changed out of their working uniform, although we can imagine a back room somewhere full of muddy boots. The supply of full Women's Land Army uniform was notoriously erratic, and many of the girls here have improvised their own tops. Which adds to the colour, along with the peonies on top of the radio (almost universally called the wireless in 1943) in the top left hand corner.

It doesn't take much imagination to hear the surround sound, the chatter, the laughter, the retelling of the day's events, the clatter from the kitchen, the banter between Land Girls and canteen staff as they dish up what appears to be a staple of canteen food, sausage and mashed potatoes. Or it might be another standby, spam fritters, slices of supposedly pork luncheon meat fried in its own fat. Nor should we forget the horseshoe, hung from the ceiling at an angle, so that the luck it's supposed to hold doesn't spill out.

Given the attempts in these commentaries to associate, rightly or wrongly, Evelyn's war paintings with the progress of the war, it's not hard to link the ambience of Women's Land Army Hostel with what was going on in the wider world. Within the tumultuous week May 12th - 19th, 1943, the famous RAF Dambusters raid had taken place, destroying the water supply to Germany's industrial heartland, the Ruhr. The surrender of 150,000 German and Italian troops in Tunisia marked the end of the North African campaign. The encouraging end-of-the-month statistics of merchant ship losses showed the U-boat menace was being mastered. In a wary and circumspect way, there was much to be cheerful about.