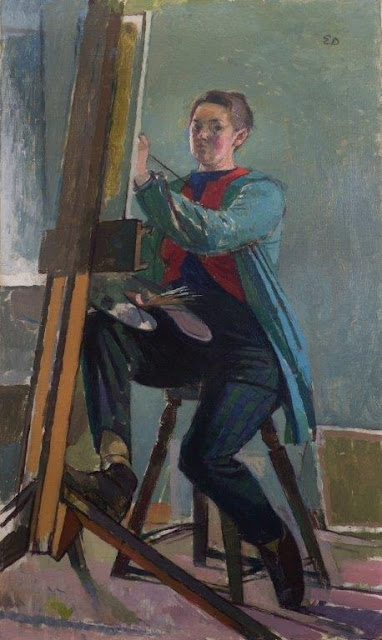 There's often a slight mystery about artists' self-portraits. Something undefinable, something not quite right about the sitter, especially if you've known him or her personally. It may take a little time before it clicks, like an optical illusion falling into place. In Evelyn's case above, painted when she was a little over 50, she has dressed maybe a little less informally than she would have done for a day to be spent in her studio, but all the same there's something not quite faithful to Evelyn's image. For one thing, the balance and ensemble of her facial features - no one's face is exactly symmetrical - has been changed. Nor was she left-handed. The explanation is simple. Evelyn is painting what she sees in the full length mirror she has brought into her studio. Left and right are reversed.
Evelyn is in her new studio. In the autumn of 1958 she and her husband Roger Folley moved into Staple Farm, a farmhouse on the west-facing slopes of the North Downs near Hastingleigh, a village some miles south of Canterbury. She has not long moved in. There have been alterations, among them the addition of an upstairs studio, the first more than makeshift studio she has had since 1945. (How ironic that she should have only 18 months to enjoy it: she died in May 1960.) In a sense she is christening her studio with a self-portrait, the first for many years. In her youth she made several, but she lost the habit after leaving the Royal College of Art in 1933.
As always composition is paramount. Her image is based on an isosceles triangle which rises from a slew of legs - nine altogether, hers, the stool's and the easel's - to direct us to the head and the eye and the imagination of this remarkable artist.
Evelyn's first known self-portrait, with the same mirror-image reversal, dates from 1922, when she was 15. Here, among her palette and easel, she is maybe dreaming of her future as an artist. Her hand is extraordinarily assured for a 15-year-old. 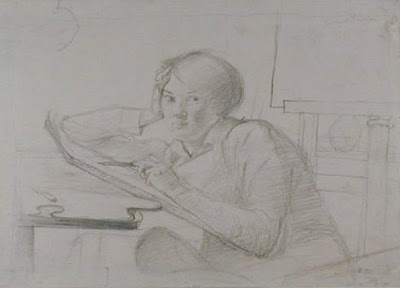 Evelyn was in her late teens when she produced a self-portrait in a different vein: 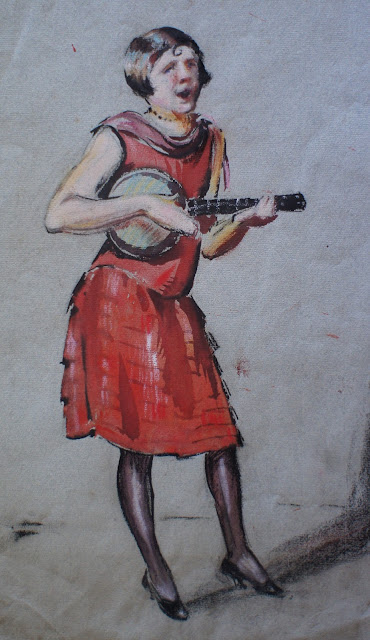 This probably refers to the housewarming party the Dunbar family gave to celebrate William Dunbar's (Evelyn's father) purchase of The Cedars, the family house in Strood. Two at least of the five Dunbar siblings played in a band for the occasion, Evelyn on banjolele (a cross between banjo and ukulele) and her older sister Marjorie on piano. Studies survive of several other band members, including a violinist and a concertina player. Here is Evelyn, who had a wide repertoire of the dance tunes and popular songs of the day, in full exuberance with the Charleston or Foxtrot or the Black Bottom, complete with period kiss curl. What fun.

At 21 she produced one of the very few female nude self-portraits in the history of art. At the time she was casting about for an art college to suit her, having had one or two false starts and subsequent drop-outs in Rochester and Chelsea. In 1929 she won an exhibition to the Royal College of Art, but it's unlikely that she submitted this self-portrait as part of her entry application portfolio. 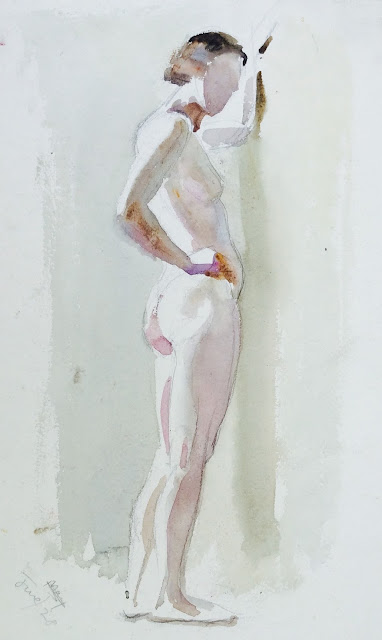 
We assume that this delicate water-colour is indeed a self-portrait because the inscription is in Evelyn's handwriting at that period, because she kept it all her life and because the provenance is impeccable. The modest rondeurs and texture of the buttocks are echoed in several mid-1930s letters to her fellow-artist and lover Charles Mahoney, who compared this feature to a peach, and vice versa. It came to light in a portfolio of other juvenilia - she was 21, nevertheless - in 2013, bundled up separately from the substantial quantity of Royal College of Art life school studies from a year or two later. Why did she paint it? In the summer of 1928 she was living at home, writing and illustrating children's books, not having found much satisfaction in the art college courses she had abandoned. In the absence of life classes, and maybe conscious of the louche reputation sometimes attaching itself to models, did Evelyn try to explore one of the great imperatives of figure drawing unofficially, in the comfort of her own bedroom? Perhaps we should ask no further questions, but simply enjoy this delicate water-colour essay into the nude with the subtly tinted flesh of an attractive 21-year-old woman.

Finally, from 1930 comes this rather severe self-portrait, in all probability submitted to her Royal College of Art tutors as part of a mid-course portfolio. Evelyn has grown up. 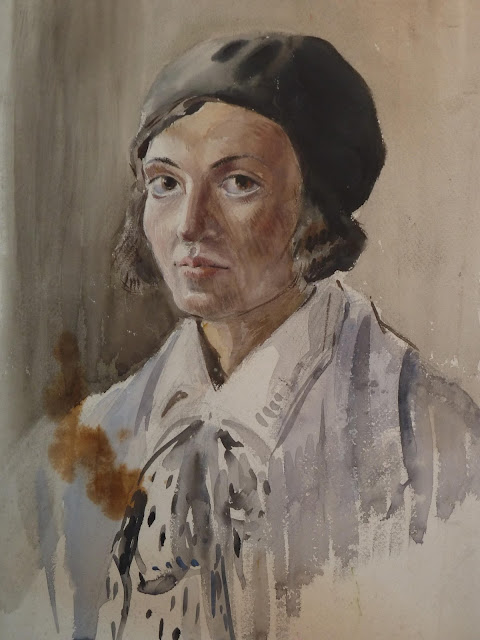 EVELYN DUNBAR : A LIFE IN PAINTING by Christopher Campbell-Howes
is available to order online from
http://www.casematepublishing.co.uk/index.php/evelyn-dunbar-10523.html
448 pages, 300 illustrations. £25
Posted by Christopher at 14:06:00