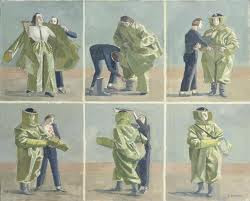 
This most unusual composition was the first painting Evelyn submitted to the War Artists Advisory Committee. After her appointment as an Official War Artist in April 1940, she was advised to put herself in the hands of Lady Reading, who had founded the Women's Voluntary Service two years earlier. As a result she was directed to Bisham Abbey, near Marlow in Buckinghamshire, to observe and record the various forms of civilian training for wartime emergencies that took place there. One of these was for dealing with chemical weapons, particularly poison gas bombing.

At the outbreak of war in September 1939 it was widely expected that poison gases would be used. There was good reason to think so. Mustard and other poison gases had been used in the trenches in World War I, occasionally with the unintended consequence of an unexpected change of wind direction causing as much harm to attacker as to attacked. Despite an ambivalently worded clause in the Geneva Protocol of 1922, the development of poison gases and chemicals as strategic weapons had developed in the inter-war period. The simultaneous development of heavy bombers for the indiscriminate delivery of chemical weapons involved civilian populations in a way never before experienced. People were aware that in 1924 the Spanish had used gas in their colonial wars in Morocco. They believed that Mussolini's armies had used gas more widely in the Italian invasion of Ethiopia in 1935. Neither showed much discrimination between civilians and combatants.

Why gas was never used in World War II is a question sometimes asked by military historians. Probably the reason lay in mutual fear of retaliation. However, gas was expected, and precautions were taken. The entire British population was issued with gas masks. Older readers will remember them, close-fitting rubber masks held on the the head by adjustable webbing straps, with a flexible perspex window and a cylindrical snout supposed to filter out noxious substances in the air. People were expected to carry their gas masks everywhere, in a cardboard, or sometimes leather, box with a shoulder strap. (We will see one of these in one of Evelyn's most significant war paintings, The Queue at the Fish Shop, later on.) There was a special gas-suit for babies. Small children were equipped with gas-masks with a rubber non-return snout for breathing out, which made agreeable farting noises if you exhaled hard, I remember. Special  masks were designed for horses and dogs too.  Here are some regular gas-masks of the period: 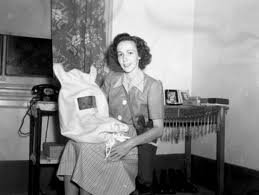 And by the time the photos below were taken it was clear that the risk of gas attacks had lessened, and that the whole business of gas-masks had become leavened with the British propensity to make light of adversity: 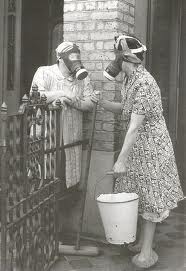 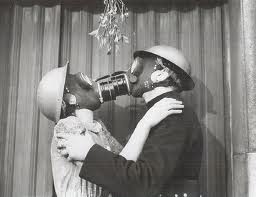 It isn't recorded, as far as I know, what Sir Kenneth Clark, chairman of the War Artists Advisory Committee and also director of the National Gallery in London, thought of the extraordinary first painting Evelyn submitted. It was accepted immediately for display at the National Gallery, and later went on tour, eventually reaching the Museum of Modern Art in New York in 1941 as part of an exhibition entitled Britain at War.


It's another of Evelyn's compartmented paintings. The last one we looked at was An English Calendar, with 25 boxes. Evelyn has reduced the number to 6, and has possibly invoked the idea of progression in the strip cartoon to show the various stages.

I don't know who Evelyn's models were. Maybe there weren't any: the faces are very simply drawn. For observers of the gender implications of dress it may be notable that both women are wearing trousers, the dresser as everyday wear and the dressee as part of her work clothing. She is also wearing a tie. By box 3 her chief model is wearing an ordinary British military helmet painted black with a white A on it, showing she's a member of an ambulance crew, maybe the driver. Her mission will be to rescue the suffering from gas-affected areas, most likely London. She's protected against the various forms of chemical weapons that were commonly expected, those that affected respiration or the nervous system and those that left lesions and blisterings on the skin.

But somehow Evelyn has managed to turn something grim and appalling into a triumph. The last box sees her model looking determinedly out of the frame, ready to face whatever mortal danger there is in store for her. In between we can feel the unwieldy stiffness of the cumbrous material, in strong contrast with the leisurely slacks, blouse, cardigan and slippers of her dresser, who has disappeared once the putting-on is finished and her agent of protection equipped. She is safe. And both are women, fully involved in activities that had hitherto been almost exclusively the province of men.

And there's a certain majesty about her principal figure. Except in box 2, her head is held high.  The folds of her protective gear are strongly painted, suggesting confidence and determination. Little is going to daunt this woman. She stands for Britain: at the time Putting on Anti-Gas Protective Clothing was first exhibited, in July 1940, invasion was expected every day, and apart from the Royal Air Force, there was little to resist it. Evelyn's model perfectly represents the quietly defiant mood of a proud nation in great danger.

EVELYN DUNBAR : A LIFE IN PAINTING by Christopher Campbell-Howes
is available to order online from
http://www.casematepublishing.co.uk/index.php/evelyn-dunbar-10523.html
448 pages, 300 illustrations. £25
Posted by Christopher at 14:06:00