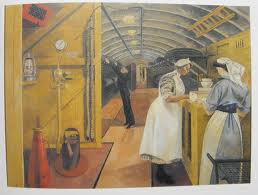 In carrying out the terms of her contract as an Official War Artist, by early 1941 Evelyn had covered most areas of contributions by civilian organisations to the war effort, to a large extent involving women. One area of activity she had not covered was nursing, and to fill this gap she was directed firstly to the measures the Government had taken to deal with expected air-raid casualties.

In the expectation of the need to evacuate casualties from German bombing raids of United Kingdom cities, trains were held in readiness, almost from the outbreak of war. There were about 30 all told, the majority covering London. Hospital trains as such did not exist, but had to be improvised out of goods wagons. Trains of ten wagons, able to accommodate about 350 casualties of various types and severity, were linked by corridors and were staffed to a set quota.

Evelyn's Hospital Train shows a goods wagon, originally belonging to the London and North Eastern Railway (the fire extinguisher in the foreground is lettered LNER), converted into a makeshift ward with rows of blanket-covered brackets designed to take stretchers. In the foreground, in what may, a few weeks earlier, have been the guard's compartment, there are controls for a primitive form of steam heating. On the right, two nurses, one from the Red Cross, the other from the St John Ambulance, are preparing dressings or checking lists of supplies. In mid-picture, in the centre, a St John Ambulance orderly is arranging blankets. He appears to be of military age, and thus liable for call-up: I wonder if Evelyn has included him because, although clearly not in any of the reserved occupations like shipbuilding or coal mining, he has been exempted because of his beliefs. Is he a Conscientious Objector, maybe a Quaker? He is also one of the few men to feature in Evelyn's work from this period.

Hospital Train was one of only four colour plates used to illustrate Dermot Morrah's book The British Red Cross (Collins, London, 1944), one of a series of morale-boosting books under the general title of Britain in Pictures: The British People in Pictures. 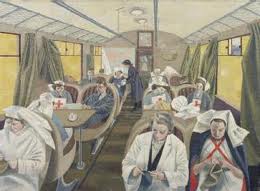 
The 'pair' to Hospital Train is Evelyn's Standing By On Train 21, maybe another contender for The Most Bizarre Title for a Painting by Evelyn Dunbar. I don't know if it's the same train or not. The steam heating pipes running the length of the roof are similar, but the windows, hung with drawn-back anti-splinter blackout curtains, indicate a converted passenger carriage.

Evelyn was encouraged to paint Standing By On Train 21 by a Miss Lees, shortly to become Superintendent-in-Chief of the St John Ambulance Brigade. At this point it's maybe well to remember that once Official War Artists' paintings had been accepted by the War Artists Advisory Committee, they were exhibited immediately in the great London galleries. Thereafter they went on tour in the provinces, and were sometimes sent abroad, particularly to the USA. There was a snap-shot immediacy about Evelyn's paintings, reflecting not just civilian women's home front activities but their unfailingly positive morale as well. Very occasionally her subjects may show boredom, like the woman in the bay window in A Knitting Party (who was in fact her own mother Florence), but the overall impression is of industry, of sleeves-rolled-up-and-let's-get-on-with-it determination. Her women are solid, dependable and fully aware of their responsibilities. They may not all be cheerful, but they're not glum, either. And they are legion, a mighty army, at a time when Britain stood alone against Hitler: at no time in her career did more canvases pour from her brush. The composition of both paintings is ordered, calm and assured. Evelyn's contribution to national morale is not to be underestimated.

This Miss Lees had earlier shown her mettle in demanding of Sir Kenneth Clark, chairman of the War Artists Advisory Committee and director of the National Gallery, that nursing should feature more heavily in war artists' work. Accordingly, by October 1941 enough security red tape had been cut through to allow Evelyn to take herself from Rochester to Ilford, in Essex, to record hospital train No. 21. This fully equipped hospital train stood full-time in the extensive marshalling yards (now built over) by Goodmayes Station, ready to move into Liverpool Street Station, in the City of London, to take on bombing casualties, evacuate them from the danger areas and distribute them to hospitals where there was less risk of bombing.

Evelyn's painting shows the staff recreation area. The woman in the central foreground is very likely to be a Dr Gibson, in overall charge of the train. Beside and behind her are nurses from various nursing organisations. Dr Gill Clarke (Evelyn Dunbar: War and Country) identifies the blue-cloaked nurse on the right as belonging to the Civil Nursing Reserve, and the woman on the left as a member of one of the religious nursing orders. Most of the others belong to the Red Cross. There's a lot of knitting going on, perhaps comforters and balaclavas, with winter coming on. In the far distance a nurse is hanging up washing, which makes me wonder if the staff actually lived on the train.

There are several male orderlies, apparently in RAF uniform. Have they been seconded from military hospitals? A woman standing in the middle of the corridor, possibly from the Women's Voluntary Service, may be asking the nurse looking up at her if she would like milk in her tea. There's an air of calm resignation, of order and assurance. No one is talking much. The hospital train is ready to move into action.

For all that, in fact these hospital trains were rarely used. In due course, particularly as the intensity of the blitz diminished, they were put to other uses or broken up. By 1944 some had been adapted as military hospital trains, for bringing the wounded back from theatres of war in France and Italy.

EVELYN DUNBAR : A LIFE IN PAINTING by Christopher Campbell-Howes
is available to order online from
http://www.casematepublishing.co.uk/index.php/evelyn-dunbar-10523.html
448 pages, 300 illustrations. £25
Posted by Christopher at 16:33:00