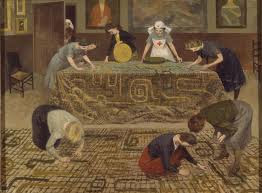 
Evelyn completed Convalescent Nurses Making Camouflage Nets as the third of her four nursing paintings from 1941/2. Looking at this painting I'm reminded of certain passages in Ian McEwan's very fine novel Atonement, which is set - apart from the coda - in exactly the period of the paintings of Evelyn that we're looking at. I'm thinking particularly of Part 3 of Atonement, in which the harrowing narrative describes the experiences of Briony Tallis working as a trainee nurse in a London hospital suddenly confronted with the wounded from Dunkirk. The workload is intense and unending, physically, mentally and (in Briony's case) emotionally. The hospital isn't identified as St Thomas' Hospital until near the end of Atonement. Of course there's no actual connection between Evelyn's painting and Ian McEwan's novel, but there is a coincidental link: the title of Evelyn's last and greatest nursing painting, to be considered later in this series, is St Thomas' Hospital in Evacuation Quarters.

Overworked civilian nurses at the time of Dunkirk and during the blitz which followed often needed rest and recuperation. Nursing organisations, the Red Cross, St John Ambulance and some of the religious nursing orders, maintained convalescent homes for nurses who had buckled under the huge demands put upon them. One of these was Bisham Abbey, actually in Berkshire but close to Marlow in Buckinghamshire, which Evelyn knew through having painted her first war picture, Putting on Anti-Gas Protective Clothing, there in 1940. A year or two after the war she scribbled a rough chronology in which she mentions 'Marlow convalescent home for nurses - camouflage nets', indicating that she went back there, perhaps picking up on previous acquaintance, to do the preliminary work for Convalescent Nurses Making Camouflage Nets. The nurse in uniform has probably been seconded from the Civil Nursing Reserve, a central register of basically-trained nurses previously known by their 1908 title of Voluntary Aid Detachment (VAD), to the Red Cross. She is on duty, at the moment showing her patients how to make camouflage nets. The seven other women - apart from the convalescent home Sister looking through the doorway - are nurses in civilian dress who have recovered enough to be able to do a little light work. Contemporary records suggest making camouflage nets was not a very popular activity.

Which room in Bisham Abbey is being used for making camouflage nets is uncertain, but we can safely imagine a dining room, a drawing room or even a ballroom, somewhere large enough to spread the immense camouflage nets - the foreground net stretches leftwards out of the frame - on which the convalescent nurses are working. The basic netting, with a widely separated warp and weft, has been manufactured elsewhere, but the threading through of strips of black, dark green and light brown material has to be done manually. When complete, and when the various sections have been sewn together, the nets will be used to camouflage targets for enemy bombing like anti-aircraft gun emplacements, tank parks, aircraft dispersal areas, fuel and ammunition dumps, and so on.

Evelyn's construction is as sound as ever. To create a sense of space needed to accommodate these immense nets she has used the same technique as in A Knitting Party from the year before: like the knitters, the nurses form an oval set inside a succession of rectangles which includes the frame. The nurses' surroundings are solid, secure, four-square, resting on sound foundations, like the principles for which it is claimed the war is being fought. It just possible that the portraits of two women on the back wall are intended as a tribute to the sisters Phyllis and Elizabeth Vansittart Neale, the owners of Bisham Abbey, who gifted the house to the nation for whatever useful purpose it might serve. It is now a National Sports Centre, with satellite facilities for weddings, conferences, etc. There are rumours of ghosts, maybe - who knows? - including some of the convalescent nurses Evelyn has portrayed.

EVELYN DUNBAR : A LIFE IN PAINTING by Christopher Campbell-Howes
is available to order online from
http://www.casematepublishing.co.uk/index.php/evelyn-dunbar-10523.html
448 pages, 300 illustrations. £25
Posted by Christopher at 12:45:00