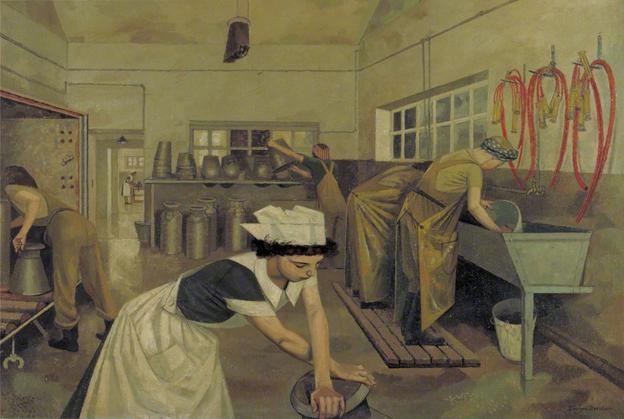 By September 1943 a quarter of the 80,000-strong Women's Land Army (WLA) were involved in milking. We've seen something of, and read a lot into, the training that Land Girls underwent a couple of posts ago in Evelyn's Milking Practice with Artificial Udders. Women's Land Army Dairy Training is the pair to it, and has the same setting, the dairy wash house, with the same duckboards and galvanised steel wash-trough, and indeed the same atmosphere of washing soda and carbolic-scented wetness.

Both were painted in the late summer of 1940, and the setting for both was Sparsholt Farm Institute, in Hampshire, where many WLA recruits received their initial training. As previously mentioned, a senior instructor at Sparsholt, Michael Greenhill, was so impressed during Evelyn's visits there by her draughtsmanship that he suggested they should collaborate on a primer of husbandry and basic agricultural practices: A Book of Farmcraft, published by Longmans in 1942 at two shillings and sixpence (£0.125) was the result. It is comprehensively illustrated with Evelyn's very fine pen-and-ink drawings. Here is her recommended method of rolling a milk churn on the rim of its base:

Evelyn Dunbar: Illustration from A Book of Farmcraft (Longmans, London, 1942)


Evelyn's model in Women's Land Army Dairy Training takes centre stage, where her uniform separates her from the young women in the background, engaged in various menial but imperative cleansing tasks. By chance we know her name: she was Josephine Loosemore (known as José), Assistant Dairy Instructress at Sparsholt. She was not a Land Girl, but an employee who had joined the staff on completion of the Sparsholt 1938-39 dairy training course. In the background her similarly-uniformed superior, Joan Campbell-Cockburn, can be seen leaning forward over a table in the room, maybe the buttery, beyond the dairy wash-house. José Loosemore is wheeling an empty churn into the wash-house for the trainee Land Girls to clean in the recommended fashion. The washing process is as prescribed and exact as any military drill movement.

First any container which has had milk in it is thoroughly washed out with cold water. It's clearly a wet business: the right-hand Land Girls, equipped with heavy waterproof aprons, are standing on duckboards, and the whole composition is splendidly dank and watery.

After washing the utensils will have to be scrubbed, this time in hot water, and disinfected with detergent, usually soda. We can see this going on at the far end of the wash-house, where an energetic Land Girl is standing a scrubbed and disinfected pail on a shelf to drip dry alongside other containers, including the (then) newly introduced, slightly bulbous half-covered milking pails, shaped with the aperture off-centre to reduce the possibility of dirt, mud or hair, getting in during milking.

Finally, on the left, a Land Girl is putting utensils into the steam chest for sterilization. The churns, lids, pails, strainers are put in upside-down. The steam chest is securely locked, while steam at a temperature of 210ºF (100ºC) from a boiler housed off-picture is admitted for a period of 15 minutes. Thereafter the chest is opened, the utensils dry by their own heat, and the process is complete. Another of Evelyn's drawings from A Book of Farmcraft explains all the detail: 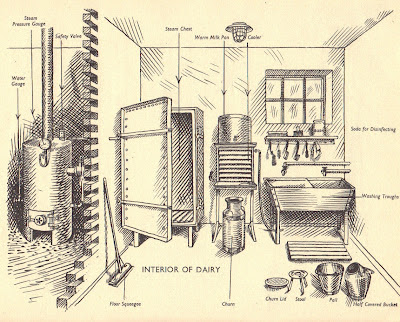 Evelyn Dunbar: Illustration from A Book of Farmcraft (Longmans, London, 1942)


It is sometimes illuminating to follow - even to the extent of doing so on a reproduction with a clear plastic ruler - the perspective and geometrical construction lines of Evelyn's paintings to see where, if anywhere, they lead. Mostly this exercise is about as practically useful as discovering ley-lines, but just occasionally her lines do interact or converge to point a subtle irony or a telling detail, a minor focus or even a joke that might otherwise have been missed. If two of the major lines in Women's Land Army Dairy Training are prolonged, that of the draining shelf at the back of the wash-house and the electric cable above the right-hand window, they converge on the background figure of Joan Campbell-Cockburn, the Dairy Instructress. It is hardly accidental. Many other lines set José Loosemore even more firmly into the foreground she already occupies, while the four Land Girls are all presented facing and leaning away, the faces of three of them being completely hidden in anonymity. This concentration on two of the Sparsholt teaching staff is a unique tribute to a set of people without whom the Women's Land Army could hardly have functioned.

Evelyn loved Sparsholt. In a letter about Sparsholt to Michael Greenhill later she wrote '[...] I miss all the nice friendly people, - not in the least staffy in retrospect. I used to like the big trolley full of coffee cups, and the array of knees sticking out of chairs and sofa. Just now I can't think of anything I didn't like!' Elsewhere she referred to '...the same pleasant clatter in the bright dining room, the same comings & goings and coffee drinkings, and puttings on of gramophone records....The same Cambyings, & Tobyings and Joséings...& am still feeling very Sparsholtian at heart.' By 'Cambyings', 'Tobyings' and 'Joséings' she meant their characteristic expressions and habits.

Who were they? 70 years and more later, it was discovered that José Loosemore, she of the Joséings, was still very much alive and with her memory intact: 'Camby' (perhaps more correctly 'Campy') was Sally Campion, the Sparsholt Matron; 'Toby', intriguingly, was Joan Campbell-Cockburn, '[...] a very mannish person & that probably accounted for her preferring 'TOBY' to Joan.' A generation later, in 1971, José Loosemore, by then Mrs Josephine Davis, remembered: 'Miss Dunbar lived at the Institute as a member of staff and painted or drew every aspect of farming life. She seemed to revel in farm machinery and "instructive action" studies.' She continued 'I described her portrayal of people as "Noah's Ark" characters - there was an engaging woodenness about their form and construction and yet surprisingly enough the result was fluid and forceful and gave a real sense of those portrayed'.  Later still, in 2005, writing or being quoted in Tate Etc. she remembered:

In 1940 I was eighteen and in my first job as a land girl [in fact she was a Sparsholt employee; she may have joined the Women's Land Army later]. I was assistant dairy instructress of the then County Institute at Sparsholt, near Winchester. At that time Evelyn Dunbar came into my life - a tall, willowy woman with a country-air complexion and very red cheeks. She was an official war artist who had been seconded to our staff to record the life of the land girls. Evelyn took an interest in me. She was wondrously kind and helped me to cope with being a teenager in an adult world. She painted me in uniform in the dairy. It gave her great pleasure to depict the stiff yellow oilskin aprons which the girls wore. She would get up early, around 6am, and trudge across the farm in all weathers, squat on windy hillsides, or perch precariously in all positions to obtain her records. In the evening she amused us by drawing our likenesses on the lecture room blackboard in good-humoured characterisation. It was wonderful to have someone so interesting and inspiring to keep company with at that time.

Women's Land Army Dairy Training and another Sparsholt-based painting uncompromisingly entitled Carting Muck were submitted to the War Artists' Advisory Committee at the end of January 1941. Women's Land Army Dairy Training was retained, but Carting Muck was returned to Evelyn. About six of her WAAC paintings were returned. Occasionally they turn up, like Men Stooking and Girls Learning to Stook (1940), which reappeared at auction in 2012, over 70 years since it was completed, and was identified and authenticated by the Kentish art dealer Andrew Sim. But of Carting Muck there has so far been no trace.