Evelyn submitted Threshing, Kent to the War Artists' Advisory Committee in 1942. The exact dating is vague, but it's likely to have been sketched and completed some time after the harvest of 1940.

The 1940 harvest was the first in which the Women's Land Army played a full part, of necessity because farm labourers of fighting age, who would otherwise have brought the harvest in, were to a large extent serving in the forces. Threshing was mostly undertaken by contractors with the necessary machinery, the threshing machines themselves and the steam-driven traction engines that hauled them from farm to farm and powered them by means of belt drives.

Few farms had their own threshing machinery. Often farms had to wait their turn, and consequently threshing might take place at any time between September and April. Harvested wheat would be stored neatly in large stacks, built on a base of hazel branches to allow airflow, and covered with tarpaulins, or sometimes thatched, until the day came when the contractor appeared with his machines and crew. Women's Land Army members were sometimes formed into threshing teams, operating with the contractors and with any other labour that could be recruited locally.

As usual there's a great deal in Evelyn's painting, and she has been at pains to present her subject from an unusual perspective. The two women on the right are standing on top of the box-like threshing machine. I expect they're being continually shaken by the vibration of the machine. The one on the extreme right is the team leader: her job is to cut - she's holding a rip-hook in her right hand - the twine holding the sheaf of wheat together, and she sets the pace at which the threshing machine is fed with loosened sheaves. Evelyn knew exactly what she was recording: almost contemporary with Threshing, Kent is her drawing from A Book of Farmcraft (Longmans, London, 1942): 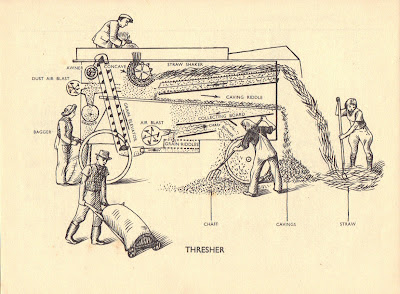 Evelyn Dunbar: illustration from A Book of Farmcraft (Longmans, London, 1942)

What Evelyn hasn't shown us is that the threshing machine has been drawn up next to the corn stack, and that somewhere out of picture a traction engine, or maybe a tractor, is pounding away, driving the belts, cogs, travellers, riddles, elevators and fans inside the threshing machine. The noise is extraordinary, and as the day goes on there will be dust and chaff everywhere. Everyone in the painting is standing on top of the corn stack, maybe 12' (c.4m) above the ground. One of them, the becapped man in the centre wielding a pitchfork, we've met already: he's Alf or Bert, the slenderer of the two Dunbar gardeners. (I never knew which was which.) Has he been called out of retirement to help with the harvest?

On the extreme left are four schoolboys armed with sticks or poles. Mike Horner explains that groups of boys like these came in from the locality at threshing time to kill the rats and mice trying to escape from the stack as the level of sheaves reduced. (Occasionally evacuees were invited to help, but relations between farmers and evacuees were often strained.) The elderly man to the right of the four boys explaining how to do it, maybe in concert with the farm dogs on the ground at the foot of the stack and therefore out of sight. These lads, aged 11-13, will have volunteered, or have been volunteered, by their parents to help. William Browns (of Richmal Crompton's irrepressible Just William) every one, their uniform of shorts, shirt and tie, caps and blazer were what boys of that age wore all the time, in school and out. One of the revolutions of the second half of the 20th Century has been in children's wear.

We're towards the start of the operation. It's earlyish in the morning, because the shadows are quite long. It's probably a Saturday, because the boys aren't in school. The landscape background, much clearer in the original than in the image above, shows Evelyn's usual opulent and organised Kentish farmland, with trees in the distance still with their leaves on: it's likely to be late September or October. The night before will have been marked by the drone of hundreds of German aircraft engaged in the bombing raids that became known as the blitz.

The tarpaulin has been removed from the corn stack, the traction engine has been fired up, the threshing machine has started to grind noisily into action, separating the ear from the stalk and the grain from the husk. The straw will be conveyed up the elevator, and the straw stack will grow in height as the corn stack diminishes.

The whole scene may have resembled a mock-up by the Weald and Downland Museum:

- but Evelyn's concern, and that of her employers, the War Artists' Advisory Committee, is to record human activity, particularly that of women, on the home front. Her Land Girls are dressed in khaki overalls, their colour mirroring the battledress of the soldiers at that moment guarding the coasts of southern England against the expected invasion. They are wearing headscarves to protect themselves from the all-pervading dust, and goggles to protect their eyes, apparently available from Ministry of Agriculture sources at 4½d, a sum so small as to be hardly worth converting into decimal currency.

There's a curious companion piece to Threshing, Kent. At some time in the summer of 1940, at a time when Evelyn's output was never greater, she completed Men Stooking and Girls Learning to Stook. It's an interesting composition, maybe expressing Evelyn's vision of the earth as endlessly abundant: the wheatfield has no limit in any direction. The technique of stooking, of collecting the sheaves of wheat as deposited by the tractor-drawn reaper and binder disappearing into the middle distance, is absolutely correct. As the day goes on the sheaves, which have exactly the same stylised appearance as those in Joseph's Dream, will be collected by wagon and stacked to await threshing.

But somehow, and very unusually for Evelyn, the figures lack life and movement. Her bold decision to render the lines of stubble in an arresting turquoisey blue must also have raised some eye-brows at the War Artists' Advisory Committee and those of its chairman, Sir Kenneth Clark, because Men Stooking and Girls Learning to Stook was rejected. In due course Evelyn retrieved it, and eventually it was given to her close friend Margaret Iliffe (née Goodwin), one of Evelyn's former Royal College of Art fellow-students.

It wasn't the only painting to be rejected: there are records of paintings entitled Land Girl in Full Dress,  Introduction to the Tractor and Women Drivers Cleaning Party Cars, this last with a title that seems to me to echo communist Russia rather than wartime Britain. None of these was accepted by the War Artists Advisory Committee, and all three have disappeared without trace.

EVELYN DUNBAR : A LIFE IN PAINTING by Christopher Campbell-Howes
is available to order online from
http://www.casematepublishing.co.uk/index.php/evelyn-dunbar-10523.html
448 pages, 300 illustrations. £25
Posted by Christopher at 17:50:00