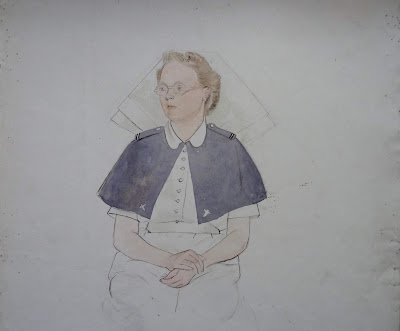 Gazetted by the War Artists' Advisory Committee (WAAC) as an official war artist in 1940, Evelyn was first assigned to record the activities of the Women's Voluntary Service (WVS). She had hardly started on this when she was re-assigned at short notice to the Women's Land Army, and her images in this field are among her best known war paintings. In 1941 she was asked to portray hospital services in their wartime guise, and in due course a quartet of nursing paintings made their way to the WAAC. On completion she returned to the Womens' Land Army.

At the end of 1942 Evelyn had an interview with Sir Kenneth Clark, chairman of the WAAC, who asked her to extend her coverage of the wartime activities of  women's organisations to include two women's branches of the armed services, the army (ATS) and the Royal Air Force (WAAF). The Royal Navy had made its own arrangements. Evelyn felt this was foreign territory to her. She baulked and procrastinated and it wasn't until July 1944, after a patient reminder from E.C.Gregory, the WAAC secretary, that she finally opened her WAAF portfolio, probably after discussion with her husband Roger Folley, then a serving RAF officer. Gregory had suggested that to speed her production up she might try water-colour instead of her usual oils.

The RAF station to which Evelyn was assigned for her WAAF portfolio was RAF South Cerney, in Gloucestershire, which she knew already through Roger's posting there some two years before. She took lodgings a few miles away in Malmesbury for the weeks she spent observing what everyone called 'Waffs' at work and occasionally at leisure. Nothing very much came from her time at RAF South Cerney. The WAAFs were quite unlike the Land Girls Evelyn had come to know and admire. Their occupations were very different, and mostly took place indoors. Interiors rarely inspired her. She found WAAFs neither easy nor rewarding to record in paint. The entire Women's Auxiliary Air Force, a non-combatant back-up echelon to male-dominated aircrew and ground crew units, expressed its ethos in uniforms, drill, parades and the usual military hierarchy of commissioned and non-commissioned officers, all adopted from their male counterparts. All this was new to her. She was not allowed into the more sensitive Operations buildings, where WAAF telegraphists, cryptographers, clerks, messengers, radar operators, air traffic controllers and administrative officers might be found at work. Further senses of distance came from the WAAFs having no occupational involvement with the soil, whereas through her convictions about the synergy between mankind and nature Evelyn could identify with the Women's Land Army very readily. WAAFs had no existence outside the context of the RAF, in which they were totally subservient to their male counterparts, whereas the Land Girls had forged a sturdy independence for themselves, to an unknown extent through Evelyn's and her female colleagues' championing of them, and in doing so had raised large question marks about the role and status of women in both wartime and in post-war society. She may well have been apprehensive of her role, wondering uneasily what Sir Kenneth Clark and the WAAC expected of her. In the event she managed to produce a modest group of paintings to fulfil her commission.

It wasn't a very happy time for her. In later letters to Gregory she wrote 'I must own that the aesthetic mood didn't flourish very vigorously on the Raf station I was at' and '...they wouldn't let me stay on and complete the job at Cerney'. For lack of much else, half her Services portfolio is made up of portraits, some of which were never submitted. One of these was Senior Sister, Princess Mary's RAF Nursing Service, a rare water-colour in which Evelyn has maybe borne Gregory's recommendation in mind. We don't know who she is - maybe a reader does? - and it may be at RAF South Cerney that Evelyn was forbidden to name her subjects. All that we know is that she's wearing a white ward dress underneath an RAF blue tippet decorated at the points with the Rod of Aesculapius, the classical healing wand emblem of medical services, and shoulder boards showing her rank and status. There's an air of calm, confidence and competence about her, so consoling to sick or wounded RAF personnel, or indeed to anyone in need of nursing.