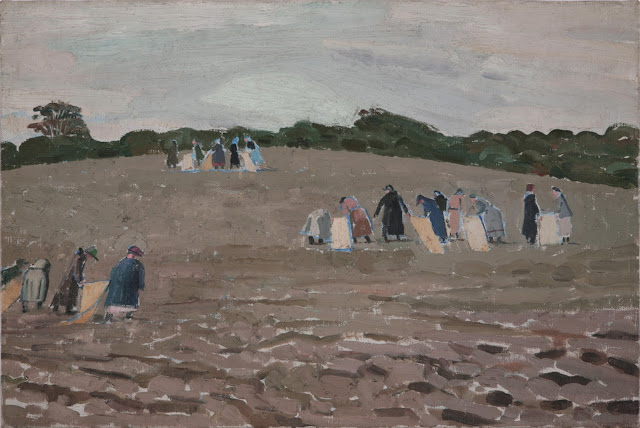 Now, what's this? At the outset I ought perhaps to put up a conjecture alert. Not much of what follows can be proved, and I may be entirely wrong. The main ingredient in my scenario is more-or-less intelligent guesswork. I hope that at the very least it's logical.

Sitting and staring at Sacking Potatoes, a necessary process for any picture for any art commentator, doesn't reveal all that much. It's in the same vein as several of Evelyn's agricultural war paintings, and might be mistaken as such: groups of women in pairs (I can't identify any men) are trailing sacks between them, traversing a field in line abreast picking up potatoes previously unearthed by a tractor and potato spinner. The women are not Land Girls, or they would be wearing some sort of Women's Land Army uniform. They presumably belong to a field labour group hired for the occasion by the farmer. It's hard to determine any logical progression; the middle group appears to be covering the same ground as the more distant group. I'm led to think that whatever the purpose of Evelyn's design, it wasn't necessarily to record a maybe not-very-interesting potato harvesting scene. She had something else in mind.

Enter Glynn Burton, a former Leeds University fellow-student of Roger Folley, Evelyn's husband, who became a lifelong friend. As it happens, we've met him before, not as an agricultural scientist but as a rock-climbing mouse. Glynn Burton had found his post-war feet working as a researcher and advisor at East Malling Research Station, near Maidstone. In 1948 he completed a book called The Potato: A Survey of its History and of Factors Influencing its Yield, Nutritive Value and Storage. It became the standard work on potato cultivation and is still in print today. He asked Evelyn if she would design the cover. She agreed readily, but I wonder if Burton's request was made before or after he had composed the title. In the event The Potato etc. appeared with an unexciting and quite un-Evelynish drawing of a potato on the cover.

We move forward 11 or 12 years. Evelyn died in May 1960. Within two years the house she and Roger had lived in was sold and her entire residual studio of some 800 pieces of artwork was boxed and bundled up and consigned to Evelyn's family. Or almost her entire residual studio: Roger kept back a small quantity of her work, paintings and drawings of which he was fond or which had a particular meaning or importance to him or those about him. Among them was Sacking Potatoes. He kept it until about 1985, when he gave it to an art specialist with a deep interest in Evelyn's work. Why did he keep it? What special meaning did it have for him?

I think Sacking Potatoes was Evelyn's design for Glynn Burton's book. I once printed out the image above and folded it with four proportionate vertical folds so as to make a book cover of it, one fold for the front flap, two for the spine, one for the back flap. It worked almost perfectly. Evelyn's wrap-around design allowed for a central spine and back and front fold-in flaps, with blank space for the publisher's blurb inside the back flap. But...oh dear, that title: 'The Potato' would have worked brilliantly, arranged between the upper and central groups of sack-women, with the author's name below. But not Burton's full 17-word title. Did the publisher cavil at the expense, indeed the impossibility, of threading the title and author's name among Evelyn's deliberately arranged teams of women? Was the project abandoned, living on only as a modest canvas in Evelyn's store and in Roger's memory as a regretted might-have-been? The questions remain unanswered and we shall never know, merely acknowledging the possibility.

Grateful thanks to England & Co. for their help with this commentary.

EVELYN DUNBAR : A LIFE IN PAINTING by Christopher Campbell-Howes
is available to order online from
http://www.casematepublishing.co.uk/index.php/evelyn-dunbar-10523.html
448 pages, 300 illustrations. £25
Posted by Christopher at 11:39:00