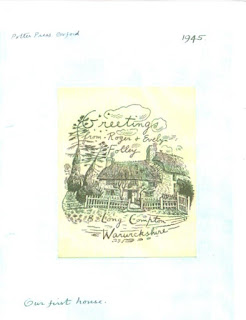 Evelyn's vignette of her and her husband Roger's first married home featured on their 1945 Christmas card. 'Our first house' is added in Evelyn's handwriting at the foot. Exceptionally, there is no literary contribution from Roger.

This drawing - it will enlarge if you click on it - is particularly fascinating for me, because at the time, as a very small child, I lived with my mother at The Old Orchard next door, the slightly higher house to the right of Evelyn's drawing. Although its official address was No. 8, Long Compton, Evelyn and Roger called their thatched cottage Vyner's, after a previous owner. This Christmas card is the only contemporary pictorial record I have of Long Compton.

Evelyn had a rather unsatisfactory studio in an outbuilding, and, love sheds though she did, I'm sure that she missed her old studio in The Cedars, the Dunbar family home in Rochester. There's a glimpse of this studio in Winter Garden: the house, seen faintly to the right of the painting between the trees, has a modest tower with a pyramidical roof. The upper room of this tower, well provided with windows, gave a generous light, especially the north light so favoured by artists, with which a tumbledown rural Warwickshire shed could hardly compete.


All the same Evelyn completed some major paintings during her 15 months or so in Long Compton. One was Dorset, which will feature here shortly. Another was Mercatora, whose location, ironically for a painting about navigation, is unknown. This painting took its name from Gerardus Mercator (1512-1594), the Flemish map-maker whom everyone knows of, even if unwittingly, because he developed a method of representing a three-dimensional sphere as a two-dimensional rectangle. The rectangular map of the world that we are all familiar with is due to Mercator's Projection. According to Roger, by December 1945 an ex-RAF navigator, Mercatora was an allegorical figure representing aspects of navigation. If this short commentary turned out to be instrumental in finding Mercatora, it would be wonderful.

Equally tantalising is the disappearance of another painting from this period, Cottages at Long Compton, which Evelyn exhibited in Oxford in the winter of 1949 and sold for 20 guineas (£21). Was Evelyn's Christmas card drawing accurate? There's no reason why it shouldn't have been, but it was fascinating to come across, while searching the internet for any clue relating to Evelyn's lost painting Cottages at Long Compton, a startling - and much more recent - photograph of the very thatched cottages in Evelyn's drawing. 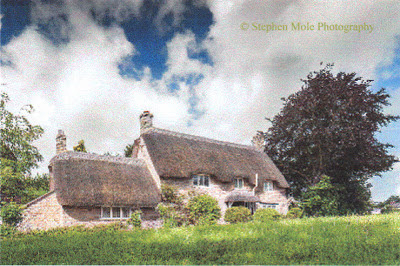 Many thanks to Stephen Mole (whose photographs are much sharper and more splendid than the above reproduction, which seems to have gone through the Blogger mangle, might suggest), of Stephen Mole Photography, for his help in the preparation of this commentary.

EVELYN DUNBAR : A LIFE IN PAINTING by Christopher Campbell-Howes
is available to order online from
http://www.casematepublishing.co.uk/index.php/evelyn-dunbar-10523.html
448 pages, 300 illustrations. £25
Posted by Christopher at 13:11:00