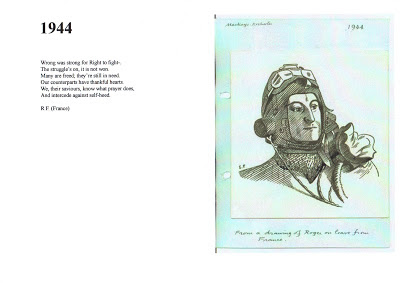 Evelyn's husband Roger Folley, serving with 488 (N.Z.) Squadron based at Amiens-Glisy in northern France, is the subject of their Christmas card for 1944. Roger managed to obtain a few days' leave at Christmas time, which he spent with Evelyn at The Cedars, the Dunbar family home in Rochester.

Evelyn has drawn Roger in his flying kit, leather helmet with earphones, night-vision goggles, oxygen mask and very non-uniform cravat. She has signed her drawing E.F. on Roger's right shoulder, and beneath she has written 'From a drawing of Roger on leave from France'. (It should enlarge if you click on it.)

For the first time in their series of Christmas cards Roger has added his own poem:

Wrong was strong for Right to fight-
The struggle's on, it is not won.
Many are freed; they're still in need.
Our counterparts have thankful hearts.
We, their saviours, know what prayer does,
And intercede against self-heed.

During Roger's Christmas leave his pilot, Wing Commander Ron Watts, Commanding Officer of the squadron, had rostered himself for duty and had invited another navigator to take the seat beside him in his De Havilland Mosquito night-fighter. This team brought down a Luftwaffe Junkers 188 in the early hours of Christmas Eve, and I have sometimes wondered what Roger felt about having missed out on what his colleagues would have called a 'kill'.

EVELYN DUNBAR : A LIFE IN PAINTING by Christopher Campbell-Howes
is available to order online from
http://www.casematepublishing.co.uk/index.php/evelyn-dunbar-10523.html
448 pages, 300 illustrations. £25
Posted by Christopher at 09:35:00