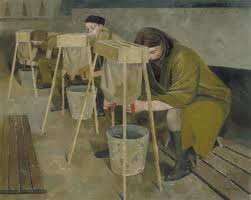 In the winter of 1939, after the failure of The Blue Gallery, Evelyn's art gallery above her sisters' shop in Rochester High Street, she heard from Sir William Rothenstein that the Ministry of Information was setting up a scheme for the employment of artists to record wartime activities. Sir William Rothenstein, one the great names in British art in the first half of the 20th century, had been Principal of the Royal College of Art during Evelyn's 1929-33 studentship. He thought very highly of Evelyn's work and remained as a sort of mentor to her until his death in 1945. Evelyn applied, and the following April her appointment as an Official War Artist, answering to the War Artists Advisory Committee (WAAC), was gazetted in The Times. Her application coincided with some exterior pressure on the WAAC to recruit women artists, and Evelyn was one of the first three to be appointed, the others being Dorothy Coke and Ethel Gabain.

Her initial brief was to record home front war-support activities undertaken by the Women's Voluntary Service and the Women's Institute, but subsequently she was directed to the Sparsholt Farm Institute, near Winchester, a centre for the training of Women's Land Army recruits. Among the first batch of paintings submitted to the WAAC in September 1940 was Milking Practice with Artificial Udders.

Evelyn threw herself into this new work with huge energy and enthusiasm. She had been at a crossroads of depression before her appointment, what she called her 'crisis' years. Her separation from Charles Mahoney in late 1937 with its attendant miscarriage had been painful, although they continued to correspond occasionally. The Blue Gallery hadn't been the success she hoped. Her work had seemed purposeless and without direction, and she was condemned to live at home and work behind the counter in her sisters' shop. Now a broad, bright highway beckoned her urgently. The work accorded well with her beliefs about the contract between Man and Nature and even allowed her to promote them, especially when the Women's Land Army was the subject.

Milking Practice with Artificial Udders is a well balanced composition that tells us much. The apparatus consists of a rickety wooden Heath Robinson frame, from which a canvas bag full of water is suspended. The bag is fitted with several red rubber teats. It's all of a piece with the sometimes quaint, amateurish and makeshift expedients and resources that Britain was obliged to fall back on in the earlier days of World War 2. The painting dates from the summer of 1940, and it gives a sense of context to remember that as Evelyn was recording these trainee dairymaids, whom one feels she has got to know quite well, Britain was in the midst of a terrible crisis: the inept Chamberlain government had fallen, Churchill had become Prime Minister and the remnants of the British and French armies were being evacuated from Dunkirk after severe defeat by Hitler's armies. (Indeed, Alec Dunbar, the younger of Evelyn's two brothers, was serving in the Royal Navy and commanded a minesweeper during the Dunkirk evacuation.)

The girls themselves are showing the right way and the wrong way of milking. These are recent recruits to the Women's Land Army, probably in their late teens and with no experience of working on the land. They're probably living away from home for the first time. There's a quiet, fixed determination about them, but later there will be a minor sense of triumph as one of them manages to fill her pail of 'milk' before the other two. Which one it is I leave you to work out while we look at another aspect of Evelyn's work.

While Evelyn was at Sparsholt, Michael Greenhill, who was responsible for the instruction of recruits, invited Evelyn to collaborate on a manual, a primer of farmwork. In due course A Book of Farmcraft appeared, with text by Greenhill and illustrations in pen and ink by Evelyn. Evelyn's preferred method was to complement Greenhill's text by showing the right and wrong ways of doing things - carrying sacks, harnessing horses, steering tractors and trailers through gateways - in paired illustrations. The book clearly fulfilled a deeply-felt need and eventually more than 40 000 copies were sold. 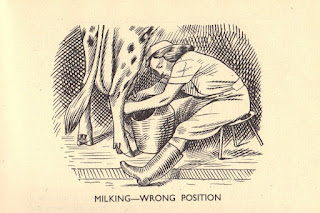 Evelyn Dunbar: illustration from A Book of Farmcraft (Longmans, London,1941)


Her model for the 'right' and 'wrong' way of milking was a senior Sparsholt recruit called Anne Hall. Evelyn's drawing of the 'wrong' way showed Anne Hall deliberately bent double, her milking stool tipped up, her head well forward, arms fully extended and her milking pail - with off-centre aperture - held between her boots. The 'right' way showed her sitting with a less tiring, more upright posture, in such a position that she could, if necessary, rest her cheek against the cow's flank, an action which apparently encourages reluctant cows to give milk. 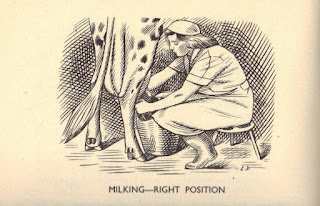 Evelyn Dunbar: illustration from A Book of Farmcraft (Longmans, London,1941) 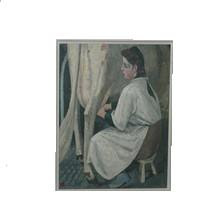 Evelyn Dunbar: Land Girl Milking c.1940 c. 8" x 12" (20.3 x 30.5cm) Location unknown
I don't know in what circumstances Evelyn's 'right' way was transformed into a pleasant little oil study, apparently measuring 8" x 12" (20.3 x 30.5cm), which at one time was in the possession of Wye College, Kent, having been gifted by Evelyn' husband, Roger Folley, many years after her death in 1960. I knew nothing of its existence until it was reported by the Kensington and Chelsea Gazette as having been stolen from an address in London in May, 2010.

Milking Practice with Artificial Udders is one of the few war paintings of which we have the original sketch. This would have been pieced together - the background of the dairy wash-room with its duckboards, the artificial udder apparatus, the girls who volunteered to model - on site at Sparsholt. The sketch would then have been taken back to Evelyn's studio in Rochester to serve as the basis of the finished canvas. 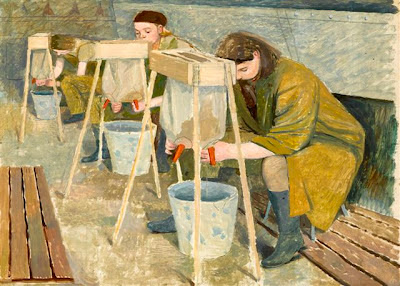 
Which of the three girls is going fill her pail first? Even allowing for individual styles of milking, it seems that the most distant Land Girl has put herself out of the running. As one whose life is the poorer for never having milked a cow, I hesitate to decide between the other two, but I suspect the Land Girl in the middle, who is not resting her elbows on her knees and whose stance is better placed to lay her cheek against the cow's flank if necessary, will fill her pail first. If she has not cheated, that is: José Loosemore, Assistant Dairy Instructor at Sparsholt, remembered that one such trainee Land Girl, dissatisfied with the flow of 'milk', had poked about in the hole of the teat, trying to enlarge it with a Kirby grip taken from her hair. José Loosemore's robust response was 'For God's sake don't try to ram it up the real thing!'

EVELYN DUNBAR : A LIFE IN PAINTING by Christopher Campbell-Howes
is available to order online from
http://www.casematepublishing.co.uk/index.php/evelyn-dunbar-10523.html
448 pages, 300 illustrations. £25
Posted by Christopher at 14:01:00