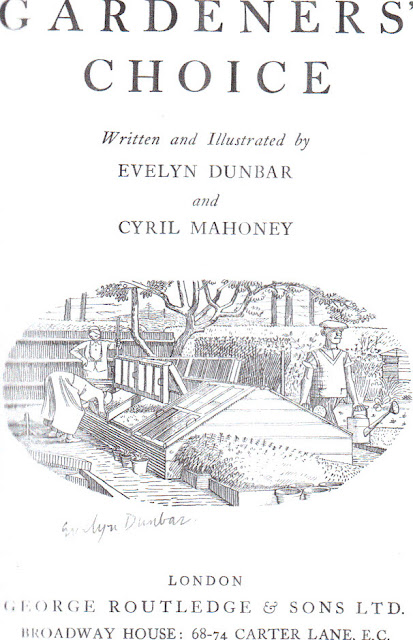 In November 1937 Routledge & Sons published Gardeners' Choice, written and illustrated by Evelyn Dunbar and Cyril (usually known as Charles) Mahoney, her former Royal College of Art tutor, fellow muralist, companion and lover. It was well received by the press, it ran to three impressions, each with a differently coloured dust jacket, and it was selected by the First Edition Club as one of the 50 best books of 1937. The title page above is that of a signed copy Evelyn gave to my mother in 1942, and which I still have.

In 1935, while she was working with Mahoney on the Brockley Murals, Evelyn was commissioned by Routledge to provide the dust jacket, the frontispiece and 25 vignettes for a dip-into miscellany called The Scots Weekend and Vade Mecum for Host, Guest and Wayfarer. Contact with Routledge led to Evelyn asking a commissioning editor called Ragg about the possibility of publishing, or at least illustrating, books about gardening or farming. Ragg concluded his reply by asking Evelyn if she knew of anyone who might be interested in writing a 'really new' book about gardening. She passed the news on to Mahoney, quoting Ragg: 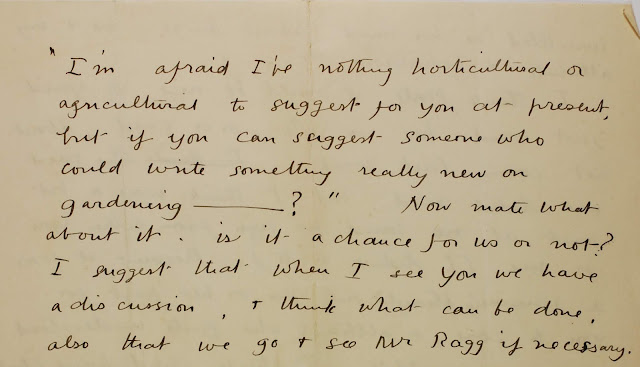 Extract from letter to Mahoney, June 1936. Tate Archive ©The estate of Evelyn Dunbar

While working at Brockley Evelyn and Mahoney had developed a close association, both professional and emotional. Evelyn saw her future as a continuing partnership with Mahoney. She was disappointed with Mahoney's departure (although long foreseen) from Brockley in May 1935, leaving her to complete the project alone, but she did not lose heart. After Brockley various collaborative propositions came their way, but Mahoney was not keen to tie himself down. The extensive collection of letters from Evelyn to Mahoney, covering the years 1933-37 and now housed in the Tate Archive, show Evelyn proposing a closer and ever closer association, with Mahoney (none of whose replies survives) apparently trying to assert a lost freedom and independence as it became clear that they were not really very well matched. Evelyn's Christian Science clashed with Mahoney's atheism, her bourgeois and merchant background sat uneasily with Mahoney's strong left-wing leanings, her natural playfulness and doctrine of perpetual cheerfulness compared ill with his volcanic temper provoked by opposition, together with a dictatorial tendency which Evelyn called his 'Caroline autocracy'.

What continued to unite them was a shared love of plants and gardening, and from this came Gardeners' Choice, their only post-Brockley collaborative venture that came to fruition. Evelyn hoped this apparently seamless collaboration would stand as a metaphor for the strength and permanence of their relationship, but by the time Gardeners' Choice appeared in late 1937 she and Mahoney had separated. A question mark hangs over who wrote or drew what. In a biographical note dated 11th February 1990 intended to update and correct an earlier Tate Gallery catalogue (Modern British Paintings, Drawings and Sculpture), Evelyn's husband Roger Folley wrote '[...] E.D. also wrote most of Gardener's Choice'. The vignettes are all Evelyn's, as are the dust jacket and the end papers, while the 40 full-page pen-and-ink drawings were shared between them, Evelyn contributing at least 10.

The text shows an intimate knowledge of the chosen plants, some of which are quite uncommon and in some cases not far removed from what many conservative gardeners of the period might have regarded as weeds. Conventions of another age would find it hard to include many of them as suitable candidates for herbaceous borders. It is this unconventionality that gives Gardeners' Choice the 'really new' character that Ragg was looking for. Rarity, individuality and lowliness are seen as virtues. Of lupins, hollyhocks and delphiniums (except, typically, the dwarf Delphinium belladonna) there is no mention, their traditional place being taken by flowering onions, angelica, mulleins and periwinkles, to mention only four. No doubt the influence of that doughty and indefatigable gardener Florence Dunbar was strong. In preparing Gardeners' Choice Evelyn and Mahoney could draw on several years'-worth of intense plant-sharing experiences.


While most of the plants discussed may have been cultivated in the family garden in Rochester, there are records of Evelyn and Mahoney travelling together to the gardens at Kew and Wisley. For some contemporary artists, gardening and painting went hand in hand: Evelyn and Mahoney visited several artist friends' gardens in search of material, particularly the garden of Edward Bawden at Great Bardfield in Essex. Mahoney had no garden of his own at the time Gardeners' Choice was being written. On the occasion of one of Mahoney's visits to The Cedars, the Dunbar family home in Rochester, Evelyn sketched him drawing Bergenia crassifolia, which eventually appeared in Gardeners' Choice: 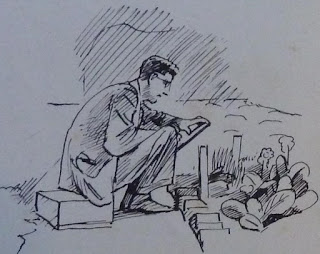 Charles Mahoney drawing Bergenia crassifolia in the garden at The Cedars, spring 1936. Photograph ©The author

Evelyn's vignettes are warm and lively, human and witty, and show something of the spirit of the Dunbar family garden. Here is her fashion-conscious older sister Marjorie, whose attitude to garden tasks seems ambivalent, although anyone who has wrestled with a push-mower will have every sympathy and will not deny her a snooze in the deck-chair: 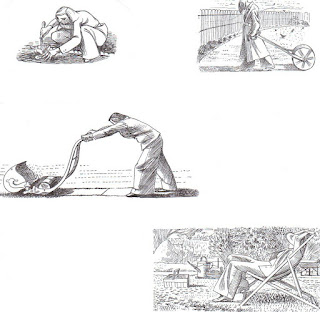 And we don't know how much of the daily toil was undertaken by the two gardeners employed by the Dunbar family, Alf and Bert (it's not certain which was which), or by the outdoor staff employed by Evelyn's aunt (Florence Dunbar's sister) and uncle, Clara and Stead Cowling, who lived in some style at Steellands, Ticehurst, Sussex, and whose house and garden sometimes appear in Gardeners' Choice. Particularly Evelynish is the short and stocky figure below returning from his allotment with a bundle on his back, maybe greenstuff for rabbits, and a bunch of flowers for Mrs Alf/Bert: 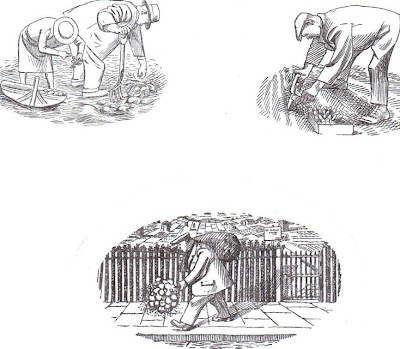 Florence Dunbar and her sister Clara Cowling appear several times in these drawings, clearly as hands-on gardeners and driving forces: 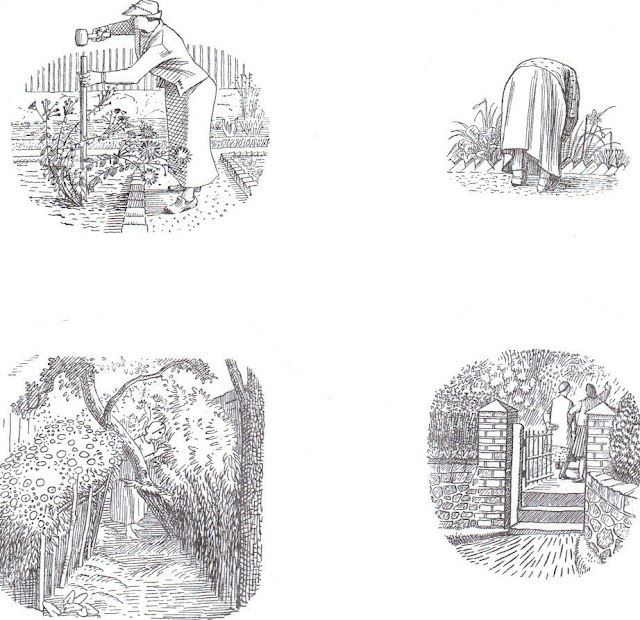 It is a measure of the influence Edward Bawden and his Great Bardfield garden had on the evolution of Gardeners' Choice that Mahoney and Evelyn asked him to write the Foreword. He did so, sending a handwritten draft to Mahoney in September 1937, accompanied by a letter asking for amendments and corrections. It could hardly have arrived at a worse moment: Evelyn's and Mahoney's relationship had reached breaking point. Bawden seems to have been told, however, that he was too late, that Routledge's deadline had passed, and so it was never published. Bawden's draft Foreword eventually appeared some 80 years later in a Persephone Books 2016 reprint of Gardeners' Choice.

One of the less common 40 herbaceous perennials featured in Gardeners' Choice was Bocconia cordata, or Plume Poppy. For some reason Paolo Boccone has been usurped by Alexander Macleay, so Macleayia cordata is now the correct botanical name. 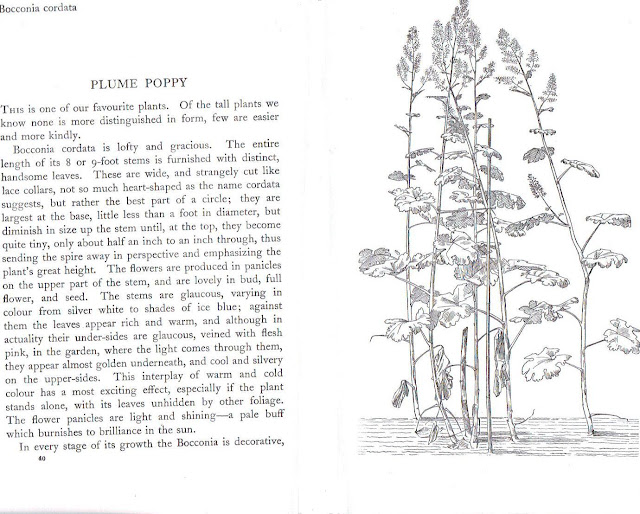 
There is a relic of Gardeners' Choice in our garden, living on in a way which I hope would have pleased both Evelyn and Mahoney. The original stand of Bocconia cordata - it grows a strong central root, propagating itself energetically from outspreading runner roots - came from the garden at The Cedars, which the remaining Dunbars sold in 1946. Evelyn and her husband Roger Folley planted a stand at The Elms, the house near Ashford, Kent, to which they moved in 1951. The same original stock, divided and subdivided, has appeared in almost every garden of our family since. Here is our descendant, probably 75 years after its ancestor left The Cedars: 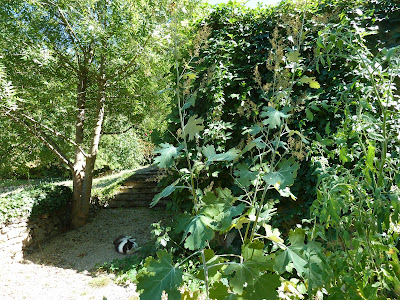 EVELYN DUNBAR : A LIFE IN PAINTING
by Christopher Campbell-Howes

is available to order online from:
Casemate Publishing | Amazon UK | Amazon US