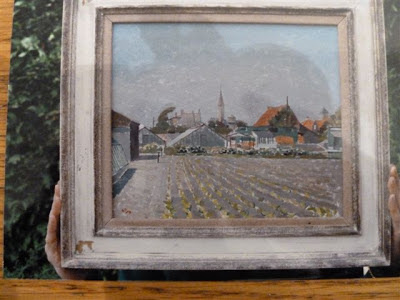 I've known this endearing little composition for a long time. It's one of the very few, six or seven, of Evelyn's paintings that her husband Roger kept with him long after her death in 1960, almost until his own death in 2008. I don't know what happened to it. Apart from its benign and unassuming harmony, I think he had a particular reason for keeping it, which I'll come to in a moment.

The hands just visible at the sides are Roger's. He's holding the painting up to be photographed in the same circumstances, that's to say in his sister's garden in Scotland, as the 1946 portrait Roger Folley. The photo above is one I took of the original photo, itself taken in the mid-1980s.

It wasn't until I began to look very closely at this little landscape that I realised that there was something quite unusual about it. It was the central church spire that alerted me: it didn't really say 'Kent', which is where, together with Sussex, the great majority of Evelyn's landscapes are set. There are no figures in it, so it's hardly likely to be a leftover from her wartime paintings.

The other roof-lines didn't suggest The Weald, either. Although the greenhouses might be anywhere, the turreted outline of a sort of fortress on the centre left, the spire, the pitch of the tiled roof with the gable end facing us, the capped tower on the centre right all suggested Northern Europe. But where?

Roger's work as a lecturer at Wye College and as a leading horticultural economist in his own right often took him abroad. Usually he went on his own or with colleagues, but in or about 1956 he went to Naaldwijk, in Holland, partly to gather material for his book, now out of print, called Tomatoes the Dutch Way. On this occasion Evelyn went with him.

Roger sometimes regretted that Evelyn showed little interest in painting anything but her beloved Kent and Sussex. In the summer of 1956 he and Evelyn spent two weeks on the Italian Riviera, based on a little seaside place called Ospedaletti. (They very kindly took me with them.) Despite exploration into the mountainous Ligurian hinterland and along the excitingly picturesque coast as far as Portofino and Santa Margherita, Evelyn produced nothing but a few sketches. Although finding material for Evelyn to paint wasn't the chief purpose of the holiday, I think Roger sometimes found it hard to come to terms with Evelyn's first source of inspiration being from the land, and what it might produce when intelligently looked after. The Covenant, again.

So maybe it's not surprising that her accompanying Roger to Holland resulted in Market Garden in Naaldwijk (this is my title, incidentally, for want of a better), Evelyn's only painting recording something outside the United Kingdom. Maybe we won't be very far from the truth if we imagine Evelyn setting up her summer easel in some Dutch market garden where the balance of indoor and outdoor cultivation, and of the buildings in the background, produced a harmonious and comfortable scene. Meanwhile Roger may be in those very greenhouses discussing their methods with his Dutch hosts. And, almost the last of an excessive series of maybes, I wonder if travelling away together from home for Roger to work while Evelyn painted pleasantly recalled some of their shared wartime experiences?

Thanks to Jane England for her help in the preparation of this commentary.