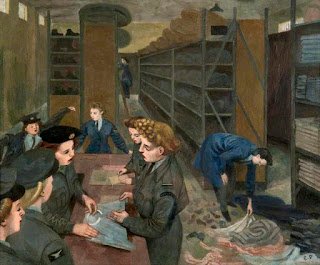 In the summer of 1944, while Allied troops were fighting furiously to drive the Germans out of Normandy, Evelyn was given the necessary passes to carry out a commission to record the activities of the Women's Auxiliary Air Force. I don't think her heart was in it. She set up her easel at RAF South Cerney, a training station in Gloucestershire, not far from RAF Colerne, where Roger's unit, 488 (N.Z.) Squadron, was stationed.

Once again Evelyn seems to have taken her stepladder to give a top-down view of a WAAF clothing store. The two central figures, the nearer with a splendid hair-do which must have been difficult to accommodate inside a WAAF cap, however floppy they may have been, are wearing fatigues or working overalls. The figure on the right, bending forward to retrieve discarded clothing, is also wearing fatigues under a blue overall, and the sharp-eyed will note that they are trousered, a tiny clue confirming a change of attitudes to women's wear at institutional level. The discarded clothing is unidentifiable, the strips of pink a mystery. They're certainly not outerwear. Slips? Suspender belts? Surely not. We move on.

In Evelyn's default style we're led into this painting from the left, just as we are in so many others, like Women's Land Army Hostel or The Queue at the Fish Shop. The three WAAFs forming the queue (again, very elegantly coiffed) are also dressed in fatigues. They appear to be lining up to receive RAF blue battledress uniform, as being tried on by the figure on the left centre, contorting herself to get into her tunic, under the eyes of a WAAF corporal. Will we meet this little WAAF again in a moment?

On the counter there's some discussion going on about a blouse or shirt, and there's nothing remarkable about this except to note that very often shirts of the period had detachable collars, held in place by a simple stud at the back of the neck and at the front by a more complex stud with a hinged button on a stalk long enough to pass through and fasten four layers of fabric, the two sides of the shirt neck and the two ends of the collar. The advantage of having a detachable collar, which older readers will remember and which dog-collared clergy will struggle with daily, was that it could be laundered and maybe starched daily or at will, while the shirt needed less frequent laundering.

Clearly these collars loomed large in the eyes of inspecting WAAF officers. Joan Wyndham, a particularly lively, indeed racy, World War 2 diarist who signed up as a WAAF a year or two before the date of Evelyn's painting, confided the following impression to her diary for August, 1941:

[...] Every morning at crack of dawn we have to hit the parade ground and all day long there are lectures in the Nissen huts in how to be an administration officer.
Here is a typical day's programme - parade (and at least four things found wrong with my appearance - 'Ropy do, Wyndham, your collar is filthy!'). Then a lecture on VD and scabies, followed by compulsory hockey in a thunderstorm - then another lecture on pregnant WAAFs. As if this wasn't enough we have a compulsory cello concert after dinner - can you imagine after all that a cello concert? 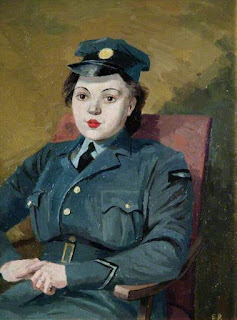 I wonder if this Air Woman is the same person as on the extreme mid-left, putting on her tunic, in Women's Auxiliary Air Force Stores? We don't know who she was or anything about her. The badge on her shoulder, a stylised eagle, was common to all WAAFs. Normally there was an embroidered A (for Auxiliary) badge below the eagle, but for an unknown reason it's missing from this portrait. The inverted chevron on her left cuff had nothing to do with rank. It was awarded for good conduct.

There was an interesting exchange of correspondence about this portrait between Gregory, the secretary of the War Artists Advisory Committee, and Evelyn, who had submitted these two WAAF paintings in the spring of 1945. (Her usual method of delivery to the WAAC offices was by train, travelling herself with her paintings in the guard's van.)

Gregory wrote expressing the WAAC's delighted approval of the consignment 'with the exception of the small one of the Airwoman, and quite frankly they did not think this was of very great interest. The sitter was not a very good one and the picture did not add much to our war records'.

Evelyn replied: 'In defence of my little Waaf, I will say she is extremely typical, as you might agree if you lived among several hundred of them. [...] I must own that the aesthetic mood didn't flourish very vigorously on the Raf Station I was at, but I did not realise it at the time...'

The late summer of 1944, when the preliminary sketches for these two paintings were made, and maybe others unaccounted for, was a troubled time for Evelyn. Roger's squadron was flying continually. 488 (N.Z.) squadron was equipped with De Havilland Mosquito night-fighters. These fast, lightly constructed aircraft (they were largely made of wood) carried a crew of two, pilot and navigator, usually a permanent pairing. Roger's pilot was Squadron Leader Ron Watts, a New Zealander who was eventually promoted to command the squadron. Roger, as his navigator, was required not only to find their way about the night skies but to operate the in-flight radar, known popularly as the 'gubbins', as well. This radar enabled enemy aircraft to be located and attacked.

At this time Evelyn was working by day and Roger flying by night, never the happiest of circumstances for a young marriage. RAF aircrew life expectancy was the shortest in the armed services. Of the 40-50 aircrew establishment in 488 (N.Z.) Squadron, 8 were killed in action, some 16%. (25 lost their lives in flying accidents, mostly during training.) Evelyn never knew whether Roger would be returning from the previous night's sortie.

To add to Evelyn's troubles, in June 1944 Evelyn's mother Florence Dunbar died, after a long illness, probably cancer, which had prevented her from attending Roger's and Evelyn's wedding in August, 1942. In the circumstances she can be excused from the aesthetic mood not flourishing very vigorously.

Portrait of an Air Woman is the first formal portrait we have seen from Evelyn's hand. It was by no means the first portrait she had ever completed. During the war Evelyn continued to exhibit her non-WAAC paintings sporadically. Joseph's Dream was shown at the New English Art Club's 1944 exhibition (she was elected a member the following year) and other exhibited paintings included portraits entitled Roger Folley (watercolour), Mrs Dunbar and Paul and Mrs Dunbar and the Snog.

This is extremely tantalising. Portrait of an Air Woman hardly takes us inside the character of the sitter, and although it's not quite a 'ropy do', to use Joan Wyndham's inspecting officer's period phrase, it doesn't tell us much about her. There's a certain diffidence about it, as though Evelyn hadn't, or couldn't, engage fully with 'her little Waaf'. Her later portraiture shows great skill and commitment, indeed often a fascination with her sitters. 'Paul' was the Dunbar family dog, an Aberdeen terrier. Evelyn had a habit of coining familiar nicknames, of affectionately corrupting everyday names into something else. In Dunbarese 'Snog' meant 'dog'. 'Mrs Dunbar' might be her sister-in-law Jill, who married Alec, the younger of Evelyn's two brothers, or her recently deceased mother Florence. The Mrs Dunbar portraits may be one and the same, or they may be two different paintings. One, or both, has/have not been located, so it/they can't be quoted in any assessment of Evelyn's acumen for portraiture. Nor has the whereabouts of the watercolour Roger Folley been found.Can anyone help?. 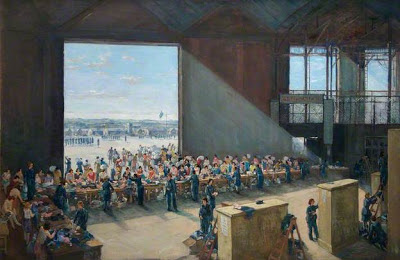 I am grateful to Graham Corner for his help with this commentary.