Evelyn was in her early twenties and about to enter the Royal College of Art when she began this painting, in about 1928. It isn't very large: it measures 1' by 3', about 30 x 90cm. She called it Winter Garden, and it's now in Tate Britain, although not permanently on display.

In 1928 she was living with her family in Strood, which is that part of Rochester, Kent, on the west bank of the river Medway. She and her parents William and Florence Dunbar and her four older siblings, Ronald, Jessie, Marjorie and Alec lived in a house called The Cedars, a large late Victorian house overlooking Strood and with views across the valley to Rochester with its prominent cathedral and castle. From an early age Evelyn had shown considerable artistic talent, and the promise she showed was recognised in the 1929 award by Kent County Council of an exhibition to the Royal College of Art, increased to a full scholarship the following year.

The Cedars had an extensive garden, now built over. Evelyn drew on this garden for ideas for many years. Winter Garden shows it from the far end. The house in the right background is The Cedars. The eye is led to it, following the gravelled and neatly-edged garden paths. The pyramid-shaped structure at the top of the house is the studio, shared by Evelyn with her mother, an amateur artist who specialised in floral still-lifes.

The Dunbars employed two gardeners, Alf and Bert. One, inherited by William Dunbar when he bought the property in 1924, was short and stocky. The other was younger, tall and rangy. We don't know which was Alf and which was Bert. Here is a little caricature Evelyn made of them, but we're no nearer identifying which was which: 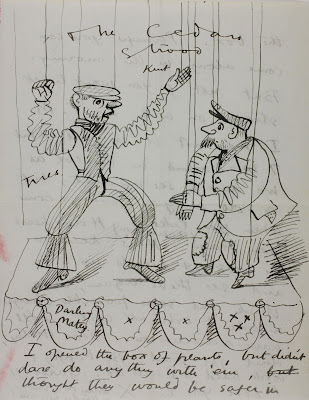 Thanks to them and no doubt members of the family, everything, even in midwinter, is tidy, controlled, expectant and ready for spring growth. Hedges are neatly clipped, the lawn has received its last cut of the old year. The apple and pear trees espaliered along the right-hand brick wall have been pruned. The end of the year is waiting for the beginning of the new one. It's an image of promise. Guarantee, even. The year will turn, new life, new growth will start as spring approaches and the days lengthen. 'In my end is my beginning.' It will become the major theme in Evelyn's work. It's surprising to find it in her very first significant painting.

There's a subtle light of great beauty over the whole scene, rich in its interplay of harmonies. Its muted colours perfectly evoke a calm, quiet and windless December or January day in the south of England. I wonder what clues tell me it's afternoon, that evening isn't far off? I can't identify them, but it's the feeling I get.

It took Evelyn the best part of 10 years to finish this painting. She finished it in 1937, ready for exhibition in London the next year. The gestation can perhaps be explained by the comparative rarity of days like this in Kent, by Evelyn's absence in London for much of the period, by work having to be suspended as long as there were leaves on the trees, but I think there's maybe another reason. It's a very finished canvas, and its composition is extraordinarily complex, yet it appears effortless.

There are maybe five other paintings from Evelyn's hand that show the same meticulous and devoted care in construction and finish, and all of them took her a very long time to complete. And I think she was reluctant to let this painting go, maybe because Winter Garden is a metaphor, an ikon for all that she was beginning to believe, partly through the open window of Christian Science, about Nature and Mankind: Man is utterly dependent on Nature, and Nature will completely fill Mankind's needs, provided - and what a big proviso! - Mankind returns Nature's unending bounty with love, respect and intelligent husbandry. 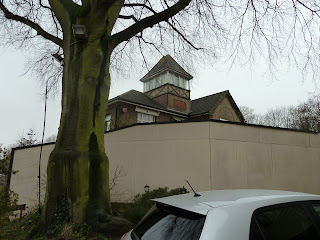 The Dunbar family home, The Cedars, in 2013. Author's photograph

Today, in 2019, all this has gone. The Cedars is still there, converted into unappealing flats, but still recognisable by the pyramid-capped tower. A cracked glass lantern with 'The Cedars Hotel' just discernible on it suggests a sort of reincarnation after it was sold in 1946. About 40 crowded houses now cover what was once this magnificent garden.

EVELYN DUNBAR : A LIFE IN PAINTING by Christopher Campbell-Howes
is available to order online from
http://www.casematepublishing.co.uk/index.php/evelyn-dunbar-10523.html
448 pages, 300 illustrations. £25
Posted by Christopher at 13:31:00