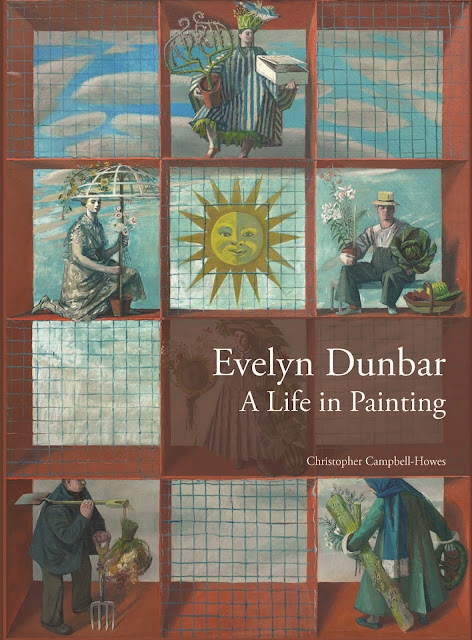 After ten years, on and off, of research and writing, Evelyn Dunbar: A Life in Painting is finished and available for pre-order.

Its genesis has been unusual. The posts below were written in an attempt to account for Evelyn's known work, mostly her paintings in public collections. Some of these posts are out of date, and I will try to update them in due course, in the light of recent discovery. On completion, in May 2013, I intended to turn my collected posts into a book. I started on it, but an extraordinary turn of events forced me to abandon it and think again.

When Evelyn died, in May 1960, her husband Roger Folley (my uncle) gathered the contents of her studio together in boxes and portfolios and handed it over to Alec Dunbar, the younger of Evelyn's two brothers. Evelyn rarely threw anything away, so the collection amounted to the best part of 900 pieces of work, ranging from finished and signed oils to tiny scraps of sketches and doodles covering her entire career. However Roger kept back several items, maybe 20, mostly oils. One or two of these he sold. Some he donated to friends and family, some to Wye College, which was then the Kentish agricultural campus of Imperial College, London, where he had lectured in horticultural economy.

Roger retained Autumn and the Poet, possibly Evelyn's greatest painting, and assigned it on extended loan to his sister, my mother Joan. She kept it for 50 years and more, making it the centrepiece of a sort of shrine she kept in memory of her much-loved sister-in-law. When my mother moved into final care at the end of her long life - she died in her 103rd year - it was decided to test the market water, and Autumn and the Poet appeared on BBC Antiques Roadshow in January 2013.The specialist Rupert Maas valued it at £40-60k.

Roger died in 2008. On several occasions in his last years he had asked me to locate the collection he had consigned to Alec Dunbar, telling me that as far as he knew it was in the 'the last house in Biddenden'. He thought its discovery might help an Evelyn Dunbar student who had approached him. Apparently he had called there himself, probably in the late 1990s, but had not been well received. To his disappointment I had to demur: living in France, with infrequent visits to the UK, it would have been very difficult to carry out his wishes. I think he died believing it had been destroyed.

In February 2013 my wife Josephine and I spent a few days in south-east England, during which we had lunch with some friends at a pub near Biddenden called The Three Chimneys. Emboldened by a splendid lunch I asked a waitress if there was a property nearby of the sort Roger had described. Well, there was one, she said, but it wasn't the last house in Biddenden, it was more likely the first. It depended which direction you approached Biddenden from.

Josephine and I knocked on the door. We were very kindly received. The sidelong eye-glancing complicity of our hosts suggested at once that we were on the right trail. We were told, however, that the person we really needed to see was out. Disappointed, I left my contact details plus my credentials and bona fides, such as they were: the URL of this blog and a hastily scribbled family tree, which very few people other than myself could have put together. After all, if Evelyn had been my aunt, I was cousin to the Dunbars, albeit by marriage.

Nothing happened for months. I despaired of anything happening, until a series of phone calls resulted in my being invited to look at what had been discovered - or rediscovered - in the attic of a nearby oast house. Alec Dunbar was long dead. His son Alasdair had taken over Evelyn's residual collection, and had done nothing with it except put it up in the attic, but now, having divorced, was out of the frame. The appearance of Autumn and the Poet on Antiques Roadshow had triggered wondering glances up to the oast house attic. The collection was complete and undamaged. Oast houses, designed for drying hops, appear to be equally favourable for storing works of art.

This was a huge find, a legendary find. When Josephine and I arrived it had been brought down and spread out in the owner's dining room. Every possible surface was covered with oils, water colours, pen-and-ink sketches, pencil drawings (hundreds of these), portraits, landscapes, preparatory studies, fantasies, still lifes (some of these done by Florence Dunbar, Evelyn's mother), figure drawings, workings-out, cartoons in Indian ink, everything you might expect from a major British 20th century artist, all in an immense profusion. The sheer quantity was striking enough, but more striking for me, who had known her, was the sudden presence of Evelyn, a palpable, warm and welcoming presence 53 years after her death.

Eventually the collection was entrusted to Paul Liss, nonpareil of 20th century British fine art specialists, whose company Liss Llewellyn Fine Art had handled the sale of Autumn and the Poet (which was bought, incidentally, by a lifelong admirer of Evelyn's work, who nobly presented it to Maidstone Museum and Bentlif Art Gallery, where it hangs today). Some of the collection was shown over the 2015-16 winter at Pallant House Gallery, Chichester, where it appears to have attracted a greater attendance than any other exhibition there.

As for me, I had a huge amount of re-thinking to do. The collection altered so many perspectives, filled out so much of Evelyn's artistic life, answered so many tantalising questions, elevated her into a richer, fuller and more significant painter than anyone had previously known. The book had to be re-written, almost from scratch. A fascinating adventure.


EVELYN DUNBAR : A LIFE IN PAINTING by Christopher Campbell-Howes
is now available to order online from
http://www.casematepublishing.co.uk/index.php/evelyn-dunbar-10523.html
448 pages, 300 illustrations. £25